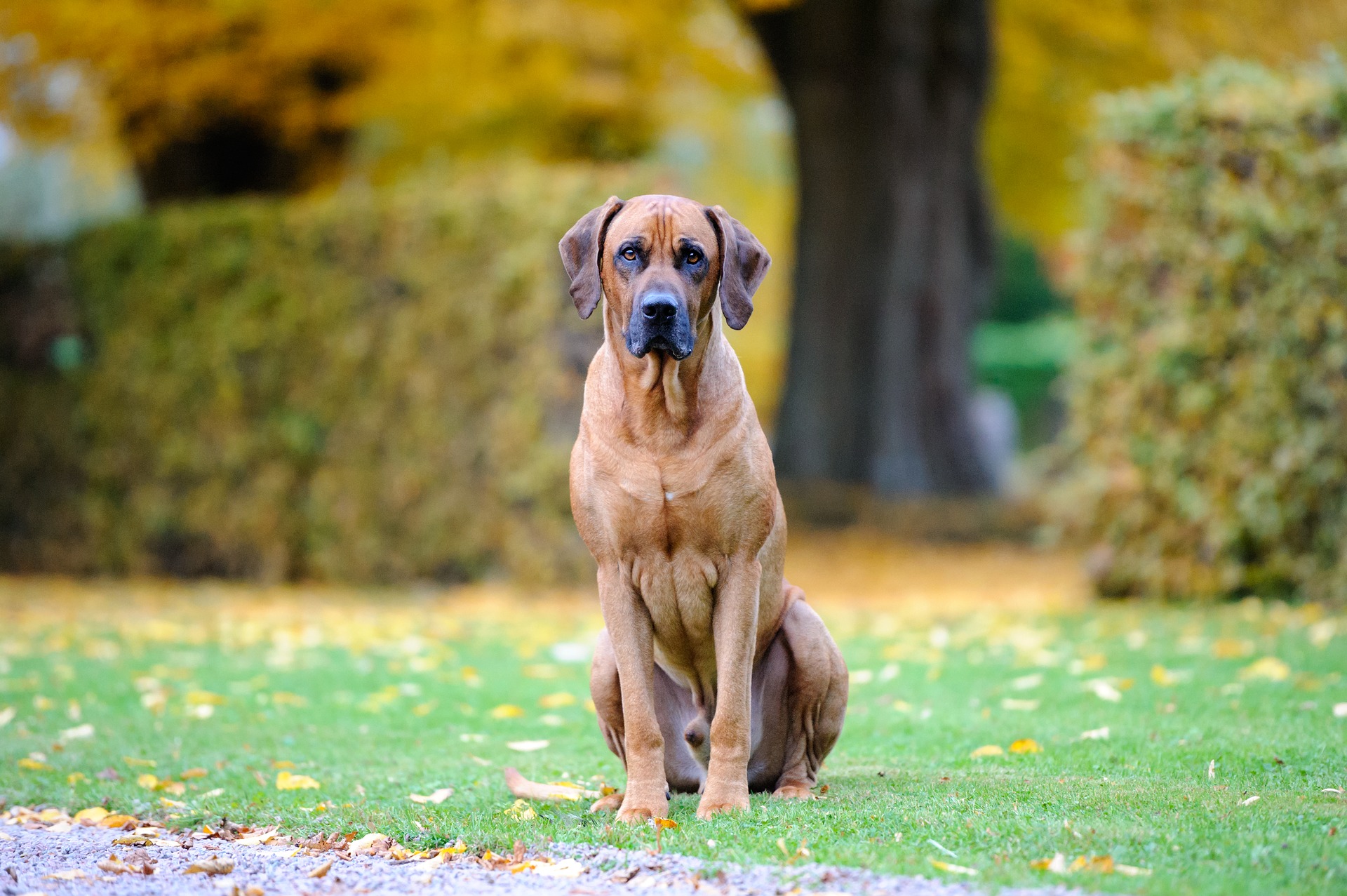 The Rhodesian Ridgeback is also known as the African Lion Hound. A unique breed hailing from Southern Africa, today we’re going to learn all about this canine!

The Ridgeback’s distinct ridge of fur running down its spine is the breed’s identifying feature. It’s caused by the duplication of a mutation of the length of DNA coding for three growth factor genes. This causes the fur to grow in the opposite direction resulting in the ridge.

Not all Ridgebacks are born with this mutation but Ridgeless Ridgebacks are disqualified under the AKC breed standards. Dogs without ridges were even culled! This practice was also exposed by BBC One in a documentary. (Scroll down to the bottom of this article to read more on that!)

Find out the pros and cons of the Rhodesian Ridgeback below:

The Rhodesian Ridgeback is a large breed dog featuring a distinct ridge of hair along the spine. Its breed standard has remained unaltered since 1922. Their short coat is found in the colours Wheaten, Light Wheaten and Red Wheaten.

The dignified Rhodesian Ridgeback is an excellent companion with a mischievous personality! Although strong-willed and independent Ridgebacks are prone to separation anxiety. They require early socialization and training which could be a little overwhelming for inexperienced owners.

Some are intimidated by the Ridgebacks appearance and are unaware of its sensitive side. These dogs are highly affectionate and intelligent. They’re versatile hunters but are calm and relaxed in the home, once they reach adulthood of course!

This breed is an excellent watchdog, quickly alerting its owners to anything out of the ordinary. Whilst the Ridgeback is aloof of strangers they shouldn’t be aggressive. Ridgeback puppies must be socialized well to prevent territorial behaviour.

Family-friendly and deeply affectionate, Ridgebacks make excellent playmates for older children. As they’re a little boisterous in their puppy years they can be a bit overwhelming for smaller children. They may also knock them over accidentally. Ridgebacks are great playmates filled with just as much energy as kids!

The gregarious Ridgeback will get along well with other dogs provided they’ve had the right socialization. Issues caused by dominance may arise between those of the same sex. Due to their strong prey drive, they may chase small dogs. Cats should be raised alongside a Rhodesian Ridgeback puppy.

The Rhodesian Ridgeback originates from Southern Africa and dates back to the 16th century. The ridged Khoikhoi dog, a native breed, mated with European breeds brought by Dutch colonists. These included Greyhounds, Boerboels, and Terriers. They created the Rhodesian Ridgeback.

Unlike the European dogs, native breeds offered the Ridgeback a form of defence against pests like the Tsetse fly. They also inherited their hunting instinct and versatility allowing them to navigate around the African terrain.

Rhodesian Ridgebacks are fantastic hunters originally bred to pursue lions. They can also track and hold the quarry in place until their hunter arrives. However, they will chase and catch animals such as antelope, sourcing food for their family

It’s unsurprising the athletic Ridgeback holds masses of stamina. Their background of hunting lions in the Savannah even earned them the name African Lion Hound. These dogs were also great at warding off predators such as leopards and baboons.

In the early 1900s big game hunting reduced in popularity and so did the Ridgeback’s breed numbers. In 1922 Cornelius von Rooyen created a breeding programme in Zimbabwe (previously known as Rhodesia).

This led to the Rhodesian Ridgeback breed standard in 1922. It wasn’t until after World War II that their popularity began to increase across the world. Particularly in Britain, Canada and the United States. Rhodesian Ridgebacks received UK Kennel Club recognition in 1954.

Rhodesian Ridgebacks need over two hours of exercise each day. They’ll become bored and destructive if their activity needs aren’t being met. Vigorous play such as swimming is a great way to tire this breed out!

Dog sports such as tracking and agility are excellent forms of exercise and mental stimulation. Despite its large size, this canine can turn quickly and sharply, a hunting feature from their time in the Savannah. The intelligent Ridgeback will breeze through an obstacle course!

The Ridgeback is a moderate shedder with a short yet dense coat. It doesn’t require much effort on the grooming front. A quick brush once a week with a slicker dog brush is all they need. Brush the ridge in the same direction the hair grows.

Baths should be given monthly at a minimum. Ridgebacks are typically clean and don’t have a strong doggy odour. Remove debris from the ear canal by cleaning the ears weekly. Nails need trimming every fortnight. Vets recommend teeth are brushed daily to prevent dental disease.

Check out the breed-related health condition of the Rhodesian Ridgeback below:

Hip Dysplasia: The abnormal growth of the hip joint causes the ball and socket to rub and grind against one another. This will cause lameness and pain leading to arthritis.
Elbow Dysplasia: The abnormal growth of the elbow joint will cause lameness, pain, and eventually arthritis.
Hypothyroidism: This disorder affects a dogs metabolism which will cause changes in the skin, weight and energy levels.
Gastric Dilatation Volvulus: The stomach twists trapping food and gases within. It’s a life-threatening condition typically caused by fast eating.
Juvenile Myoclonic Epilepsy: JME will cause uncontrollable seizures during a dog’s sleep.
Dermoid Sinus: A cyst underneath the skin is found on the spinal cord. It’s an inherited and painful condition.

Ridgebacks are strong-willed so aren’t the best breed for first-time owners. In experienced hands, this breed is easy to train thanks to its intelligence. Once the owner’s leadership is established the Ridgeback is eager to please.

This breed is sensitive and requires firm leadership not harsh. Instead, use positive reinforcement methods. Ridgebacks are smart and learn fast. Daily socialization, training and exercise will nurture the Ridgeback into a well-rounded dog.

Like most smart dog breeds, Ridgebacks bore easily. Keep training sessions short and fun. It’s best to exercise a dog before training so they can get rid of any pent up energy! Use food rewards and toys as rewards.

Remain patient and don’t let them break household boundaries. Rhodesian Ridgeback puppies are boisterous and can be frustrating! But if they’re allowed to break the rules this will have an effect on how the household’s pecking order is perceived.