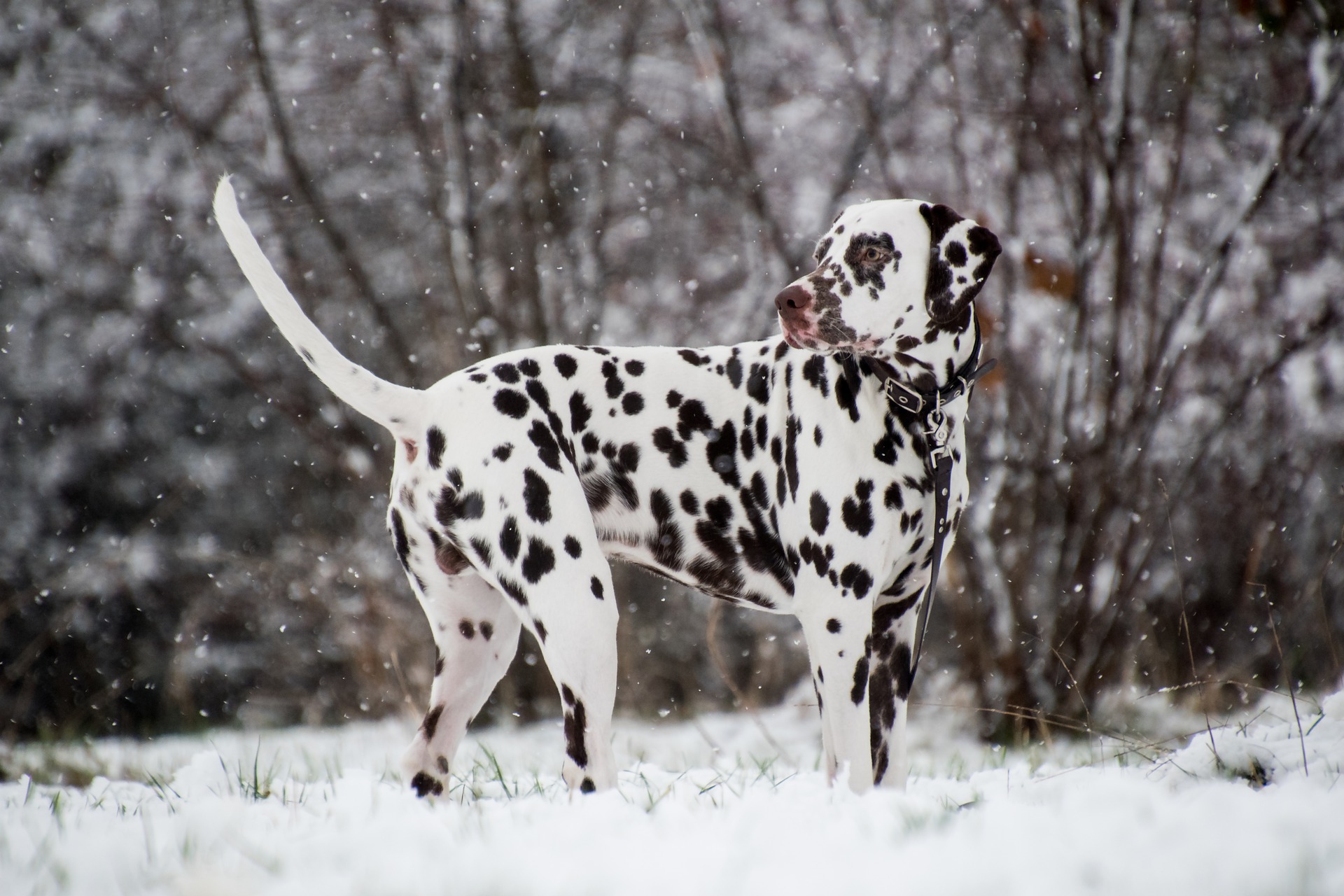 Dalmatians have been a part of British history since the 18th century. Today we’re going to find out why these dogs are just so popular in the UK!

Dalmatians are widely recognised after their big-screen debut in 101 Dalmatians. The novel was written in 1956 by Dodie Smith, a British author. Walt Disney later produced the animated adaptation in 1961 followed by a remake in 1996. Sequels soon followed.

This caused a jump in popularity which has remained even to this day. In 2020, the Kennel Club registered 1,126 Dalmatian puppies. A small rise from the previous year at 1,042 puppies. The Firehouse Dog just won’t budge from the hearts of British dog lovers!

Check out the pros and cons of the Dalmatian dog breed below:

The Dalmatian is a medium to large dog breed recognized for its white spotted body. This single-coated breed sheds all year round and is found in colours Liver & White and Black & White

The Dalmatian is sociable, friendly, sensitive, active and playful. These dogs are suitable for first-time owners but may experience separation anxiety if left alone. Dalmatians have eccentric personalities and make loving and affectionate companion dogs.

Outgoing and high in energy, the Dal requires an outdoorsy owner. These dogs are deeply loyal and eager to please, looking to their leader for direction. On occasion, they will be stubborn but overall Dals are easygoing.

Dalmatians are natural watchdogs and will alert their owners to a knock on the door. Some Dals are polite and friendly when greeting strangers whilst others are more reserved. A lack of socialization could lead to timid or even aggressive behaviour.

This breed is known to be an excellent family dog! They’re playful and filled with energy. However, their personality can be a little too boisterous for younger children. The Dal will enjoy playing fetch with the kids and can easily keep up with them!

A well-socialized Dal will get along well with other dogs. As sociable dogs, they’ll easily make friends at the park. Dalmatians aren’t known for aggression. They can live happily alongside other dogs and cats.

The beginning of the Dalmatian history is relatively unknown. Researchers have studied artefacts to indicate the Dal’s start in life. They believe Asia, Africa, Europe, and the British Isles to be the first countries they appeared in. Spotted dogs were even engraved on the tombs of pharaohs in Ancient Egypt!

The FCI lists the Dalmatians country of origin as Croatia. The first written reference to the Dalmatian was in 1370 by the Bishop of Đakovo. He came across a white-spotted hunting dog in Dalmatia, Croatia and named the dog Canis Dalmaticus.

In their early years, Dalmatians would travel alongside Romany gypsies. This explains why the breed was found in numerous places across the world. Dalmatians would work hard and were used for a variety of jobs.

Their jobs include hunting, drafting, guarding, acting as a shepherd, and even working in the circus! He is also used as a ratter, a sporting dog, and a retriever! But they aren’t great gundogs! At one time in history, they were used as war dogs on the borders of Dalmatia.

Dalmatians were introduced to the United Kingdom in the early 1800s. They were often found trotting alongside horse-drawn carriages. It earned them the name the Coach Dog. England is where the development of the Dalmatian took place.

Vero Shaw created the first breed standard in 1882. The first official Dalmatian Club was established in England, 1890. By the 1920s, Dalmatians were booming in popularity across Europe. Today, they’ve kept their popularity as a companion and working dog.

Dalmatians should receive more than two hours of exercise each day. Mental stimulation will also need to be factored into their day. When playing in the garden, ensure it is completely enclosed as the Dal may wander off.

A Dalmatian puppy shouldn’t be excessively exercised due to their growing joints. Once they reach adulthood, the Dal will make a lovely hiking, biking, and jogging partner! Dog sports such as flyball and agility are great forms of exercise and mental stimulation.

High in energy, these canines should receive at least two long walks each day. Include some form of vigorous play. Teach the Dal new tricks, let them explore, try out some puzzle games and keep their brains ticking over. Boredom will only lead to destruction.

Dalmatians shed copious amounts of fur throughout the year. To reduce shedding brush through their coat weekly. A slicker or rubber brush will do the trick. Their ears should also be cleaned weekly to remove any debris from the canal.

Find out the breed-related health conditions of the Dalmatian dog below:

Atopy: A lifelong skin condition that’ll need to be managed as there is no cure. Repeated exposure to an allergen will cause allergic symptoms such as itchy, inflamed skin.
Epilepsy: A common neurological condition in dogs causing uncontrollable seizures.
Deafness: This is a serious health issue affecting Dalmatians. In America, 8% of Dalmatian puppies are deaf compared to 5.4% in the United Kingdom. Blue-eyed Dalmatians are often linked to deafness. It isn’t recommended to breed blue-eyed Dalmatians and they’re rarely shown here in the UK.
Hyperuricemia: Some Dalmatians have liver’s that are unable to break down uric acid resulting in gout. This could lead to kidney and bladder stones.

Dalmatians are highly intelligent and breeze through their training so they’re a good choice for first-time owners. This breed does have a sensitive side and requires positive reinforcement. Avoid handing out too many food treats and instead use their favourite toy as a reward.

Socialization is important to prevent fear and anxiety in adulthood. Introduce the Dal to new people, dogs and places. They’re naturally sociable but Dalmatian puppies still need exposure to new sights and sounds.

This breed is an excellent service and therapy dog. They pick up on emotions better than other dog breeds. At the minute it’s rather unusual to see a Dalmatian working as a service dog. But they are beginning to be recognised for their ability as assistance dogs.

Dalmatians are great tracking dogs. They can easily be trained to follow scents. It’s a great form of mental stimulation and many Dalmatian owners participate in this non-competitive sport. Tracking requires the assistance of others and is greatly rewarding.

Recommended: Which human foods are toxic to dogs?