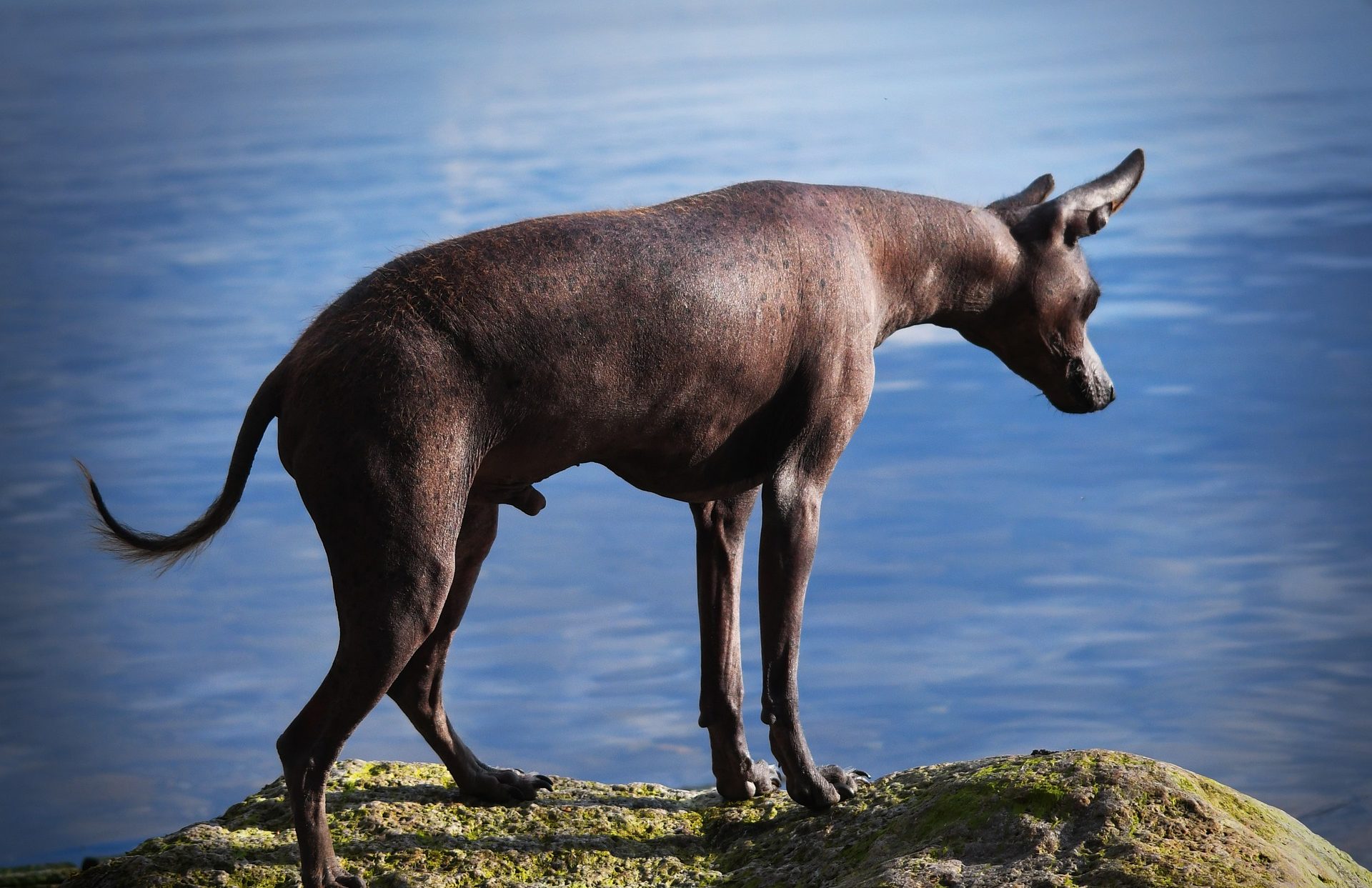 The Mexican hairless dog is hard to miss! Its unique hairless trait makes them easily identifiable. Today we’re going to look into this intriguing dog breed!

The Xoloitzcuintli is found in three varieties standard, miniature, and toy. Whilst they may not be one of the purest dogs in the world, the Xoloitzcuintli temperament has roughly remained similar. Their name is pronounced ‘sho-low-eets-QUEENT-lee’

Like the Chinese Crested dog, the Xoloitzcuintli also shares the hairless trait. However, some are born coated and both varieties can be born to the same litter! The hairless trait is often linked to dental abnormalities such as missing teeth.

Check out the pros and cons of the Xoloitzcuintli dog breed below:

The Xoloitzcuintli is a medium-sized dog. The breed resembles the Pharoah Hound in appearance. Xolos have upright ears and long necks. There is great variety in colour and skin is often spotted. Common colours include Bronze, Black, Red, Blue, Blonde and Grey.

The Xoloitzcuintli personality has kept to its primitive roots. So, they’re better suited to experienced owners. This breed is affectionate, protective, sensitive, calm, and alert. They don’t like being left alone and could develop separation anxiety if this becomes repetitive.

Xoloitzcuintli dogs will express themselves through barking but only when they have something to say! These dogs are definitely one of the more unique breeds out there. But they do make excellent companions.

When it comes to strangers, the Xoloitzcuintli will be aloof. They’re keen watchdogs and are always on the alert but aren’t great guard dogs. Some Xolos prefer not to be touched by strangers. It’s important to encourage friendly behaviour through training and socialization.

Xolo dogs like a calm environment so they’re better suited to older children. Smaller varieties should keep away from younger kids due to their fragility. This breed is loving and will make a great family dog.

Sociable and friendly the Xoloitzcuintli loves meeting new dogs on their walks. It’s often better to get a Xoloitzcuintli puppy in pairs as they prefer the company! This canine is a pack animal and is also able to live with cats.

The Mexican Hairless dog is estimated to be at least 3,500 years old. Their ancestors migrated from Asia with some of the earliest human migrants. Their name derives from, Nahtul, a language mostly spoken in Central Mexico by Aztecs.

Xolotl is an ancient God of fire and lightning. He’s a dog-headed man acting as a soul guide for the dead. Itzcuintli stands for dog in Nahtul. The Aztecs believed the Xoloitzcuintli was sacred. If their owner passed away, they’d be sacrificed and buried alongside them.

It was thought the Xolo would guide spirits in the afterlife. Aztecs also thought the Xoloitzcuintli could protect the home from evil spirits. Yet despite their sacred status, these domesticated dogs were eaten! Those that settled from Spain enjoyed eating the Xolo so much, it almost became extinct!

Many European explorers recorded the Xoloitzcuintli in their journals. Christopher Columbus was one of these explorers. They were also depicted in Ancient Mesoamerican art. Archaeologists have estimated 75% of burials during 300 B.C and A.D 300 contained a small ceramic statue of the Xolo.

Xolos were one of the first breeds to be recognised by the AKC in 1887. Yet by 1959 they’d been deregistered due to a significant drop in breed numbers. Breed enthusiasts have worked hard to re-establish the Xolo. The Xoloitzcuintli is the National Dog of Mexico.

The standard Xoloitzcuintli should receive one hour of exercise per day. However, they won’t refuse more! The miniature Xoloitzcuintli and toy variety can be exercised slightly less. Due to their strong prey drives, keep them on leash unless in an enclosed space.

Whilst they may not look like it, this breed is actually a great dog sports competitor! They do well in obedience and agility categories. Mental stimulation is also important for a Xoloitzcuintli. Keep their brains busy!

Don’t overwash the Xolo as this could damage their skin. Hairless varieties should be moisturised but not excessively. Their sensitive skin is prone to acne and sunburn. Clean the ears weekly and trim their nails fortnightly.

The Xolo is generally a healthy breed but there are some health issues you should be aware of. Check out the breed related health problems found in the Xoloitzcuintli dog below:

Hip Dysplasia: The hip joint develops abnormally causing the ball and socket to rub and grind against one another. This will cause pain, swelling, inflammation and eventually arthritis.
Patellar Luxation: The kneecap temporarily dislocates out of place before relocating back into position just as quick.
Skin Issues: Hairless Xolos are prone to skin issues. This can include blackheads, plugged hair follicles, chronic allergies, and bacterial infections.

The Xoloitzcuintli may also suffer from minor eye problems and dental issues.

Xolos take a little longer to mature so owners should keep this in mind during training. Sessions shouldn’t last longer than ten minutes as the Xolo will soon lose interest. Positive reinforcement is the only way forward as this sensitive breed won’t do well with harsh corrections.

Structure is important for the Xoloitzcuintli. A routine helps a dog establish what is expected of them. It’s also a great way to easily housebreak a dog. Return them to the same potty spot outdoors and eventually, the repetition will sink in.

To ensure a well-tempered dog early socialization is vital. Meeting new people and dogs will prevent fear-based reactions. Take the Xoloitzcuintli to different environments where they can experience new sights and sounds.

Barking can be a downside to this breed. To prevent this from becoming an excessive trait teach the Xolo the quiet command. As soon as the Xoloitzcuintli puppy enters its new home boundaries should be set. Be consistent with discipline.