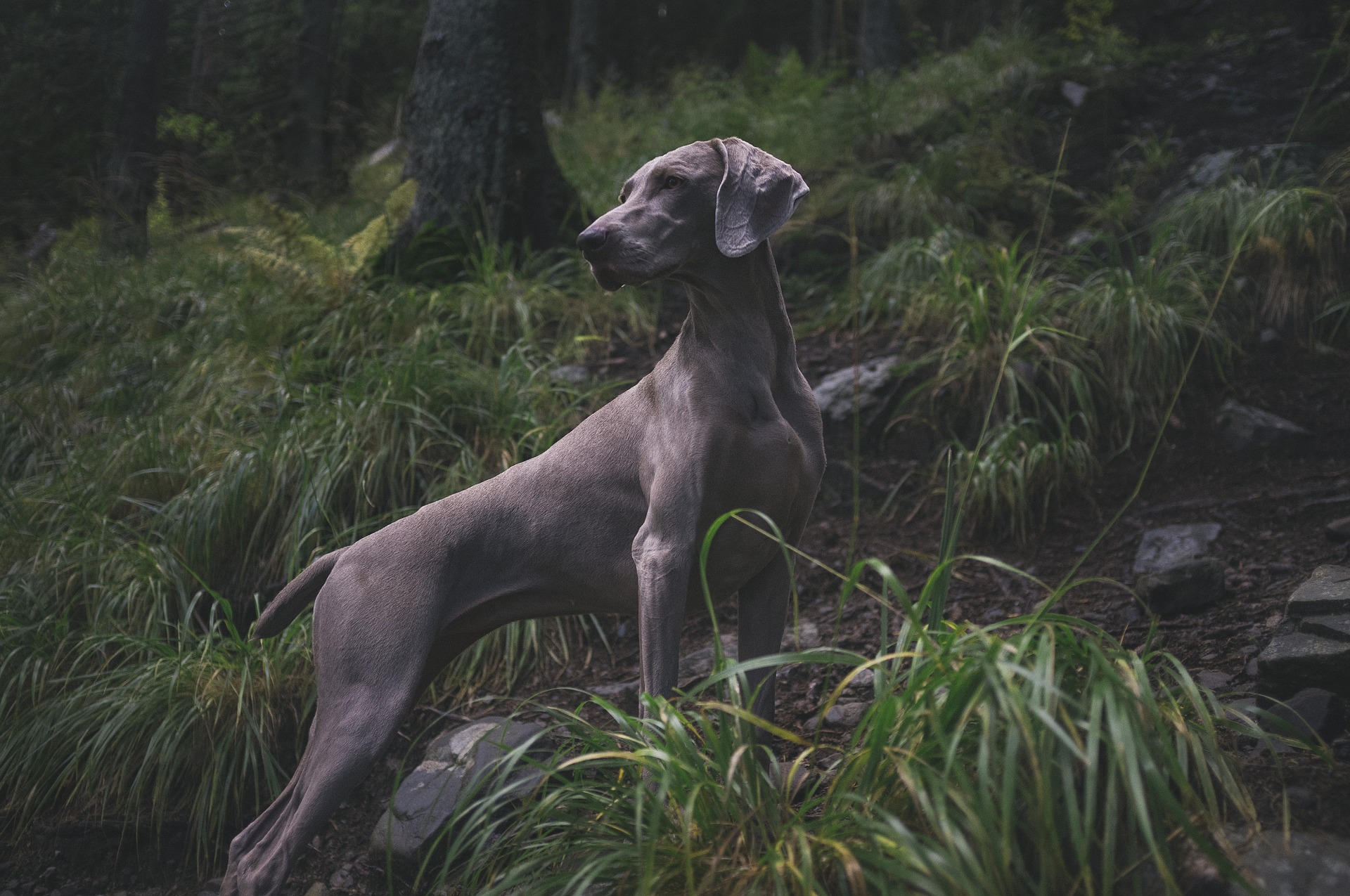 The Grey Ghost of Germany has a deep history stretching back centuries. Today we’re going to take a look at this mesmerizing hunting breed.

The Weimaraner is an elegant hunting breed that’s found a new role as a loveable companion. These gundogs are highly popular in the UK but are also one of the most expensive. Deeply intelligent, Weimaraners are also used as search and rescue dogs thanks to their impeccable sense of smell!

There are plenty of organisations looking to rehome blue Weimaraners. The Weimaraner Club of Great Britain also offers this service. It’s always best to rehome unwanted dogs. Some people are just unprepared for the amount of care a Weimaraner requires hence the increasing number of dogs looking to be rehomed.

Check out the pros and cons of the Weimaraner dog breed below:

The Weimaraner is a large dog breed that traditionally has its tail docked, something that’s part of the AKC breed standard. Their coat is short and sleek although long-haired Weimaraners aren’t unheard of. Their correct colour is grey but these are seen in different shades.

The Weimaraner temperament is intelligent, alert, energetic, steady and on occasion stubborn. This gundog has a strong prey drive and is highly strung. Owners will need to dedicate a lot of their time to raising their Weimaraner puppy. For these reasons, experienced owners are better especially those with gundog experience.

Affectionate, loving and sometimes possessive, the Weimaraner will form a deep connection with their owner. So they don’t like being left alone and could develop separation anxiety as a result. An active lifestyle is a must for this breed and the source of their happiness!

Weimaraners are aloof and suspicious of strangers. In some cases, they’ve even responded aggressively but this is mainly due to a lack of socialization. Always on the alert, the Weimaraner makes a great watchdog. They’re also territorial so may display guarding traits.

This breed is great for active families with older children! They make excellent companions but are a little too boisterous for smaller children. Exuberant and filled with energy, this breed can make a great playmate and forever companion, bonding deeply with the children in their family!

This breed is cautious of dogs they don’t know and might be dominant, even aggressive towards those of the same sex. Given the right socialization, they’ll be tolerant and even friendly! They can live with other dogs but owners should always be cautious around cats due to the breed’s high prey drive.

Native to Germany, the Weimaraner was developed in the 1800s as a hunting dog. Their typical prey consisted of large game such as bears, wolves, boars, deers, and even mountain lions! They were mostly used by Royalty but quickly established themselves as a popular gundog across the world!

The Weimaraner history begins with Grand Duke Karl August, a Noble from Weimar. His mission was to develop an avid hunting dog. He began crossing Bloodhounds with German and French hunting dogs thus creating the Weimaraner who was also known as the Weimar Pointer.

Over time large game hunting reduced and so did the need for the Weimaraner. As a result, the breed found a new line of work as an all-purpose hunter which points and retrieves gamebirds. The breed can hunt on both land and in water!

German aristocracy did their best to keep the Weimar Pointer a secret so there is still a shroud of mystery surrounding their history. Non-members who were lucky enough to obtain a Weimaraner would receive a sterilized one so it couldn’t be bred! Despite its development in the 1800s, many believe a dog similar to the Weimaraner is featured in Van Dyck’s portrait back in the 1600s!

In 1952, the breed finally made it to British shores thanks to Major R.H Petty. He managed to smuggle two Weimaraners out of Germany in exchange for goods. Their names were Cobra Von Boberstrand and Bando Von Fuhr. Weimaraners were exported to America a little while earlier in 1937.

Recommended: Enjoying this guide? Learn about the Australian Shepherd next!

Weimaraner dogs need more than two hours of daily exercise. Due to their strong prey drives, they should remain leashed in busy areas unless in an enclosed space. Ideally, these dogs should have access to large spaces and are better suited to the countryside.

The Weimaraners webbed feet make them excellent swimmers so they enjoy frolicking in the water! They benefit from long walks and hikes where they can explore the nature around them. Mental stimulation is so important in the breed as a lack of this will lead to destructive behaviours.

It’s no surprise that Weimaraners make excellent dog sports competitors. It’s a fantastic form of exercise and mental stimulation. They excel in tracking and agility. Puzzle games, hide and seek, and interactive play, are other great brain exercises!

Weimaraners have short, smooth coats which are low maintenance. A quick weekly brush to redistribute their natural oils and remove dead fur is all they need. Bristle brushes, slicker brushes, and grooming mitts are ideal tools to use on their fur.

Frequent bathing is damaging for the skin so baths should be given every 3 months unless they’re very dirty. Their long ears are susceptible to harbouring bacteria resulting in infections so clean these weekly. Nails need a trim fortnightly but regular walks can file these naturally. Don’t forget to brush their teeth daily!

Below are the breed-related Weimaraner Health conditions:

Training must start as early as possible whilst the Weimaraner puppy is at its most impressionable. They’re strong-willed so positive reinforcement works best. Never let a Weimaraner break the boundaries as these intelligent canines will pick up bad habits just as fast as good!

Some owners prefer the help of a professional trainer. It’s important to find someone with gundog experience. Group training classes are a great way to learn basic commands whilst socializing with other people and dogs.

Prone to separation anxiety, the Weimaraner requires at least one member of the household to be at home during the day. A lack of exercise will lead to boredom and destructive behaviours. No matter how much training is given without exercise, it’s meaningless.

This breed needs direction and guidance otherwise they’ll instinctively take the lead. Extensive socialization is needed throughout their lives to prevent behavioural issues. If they aren’t nurtured correctly Weimaraners can become aggressive and will bite.

Recommended: What is Hypoallergenic food? Learn all about it here!