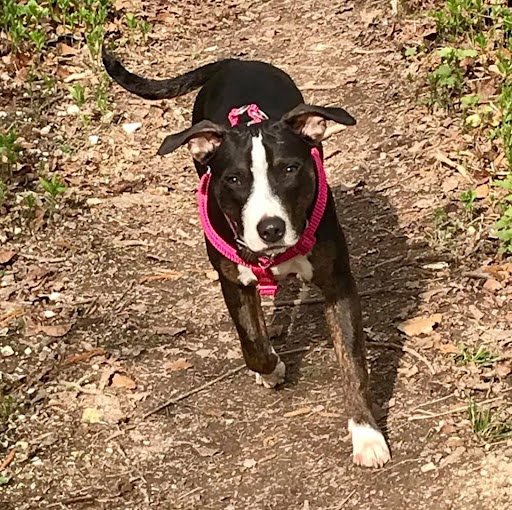 Staffie and Stray Rescue is a registered charity here in the UK. These special people help dogs who are harder to rehome and would likely be put down! Check out the fantastic work they do on their website. You can also keep up to date through their Facebook page.

Below are a couple of their most memorable stories!

On Valentine’s Day 2021, Staffie and Stray Rescue carried out their largest rescue mission to date, rescuing seven dogs all from the same property.

The majority of these dogs have never been outside, never been on a lead, never interacted with other dogs except the pack that they were in and haven’t known more than a few humans before the rescue jumped in to help on Valentine’s Day.

Taking in the dogs required two transport vehicles from a volunteer team, who gave their time in an incredible 6 hour round trip (+ additional hours to get themselves home!) to bring these dogs to safety.

This was a very traumatic day for all involved, but once the dogs arrived they were under the safe care of Staffie and Stray Rescue, who pride themselves on dedicating their lives to the health and wellbeing of their dogs, particularly specialising in dealing with more challenging and complex cases.

They were quite distressed at first but spent a lot of time socialising with people and learning that they are safe. The dogs resided in emergency boarding kennels and were given time to decompress and adjust to their new settings before assessments and rehabilitation begun prior to rehoming.

We are pleased to say that all seven dogs have found their forever homes and are living the happy lives they deserve!

Here is Winston’s story, who arrived at Staffie and Stray Rescue over Easter weekend in 2020.  Winston has quite clearly been through the wars. He was found as a stray and subsequently taken to the pound.

Upon arrival it was discovered that he was not microchipped (so he had no name), he was covered in sores, riddled with worms and terribly emaciated. One of the worst cases the team at Staffie and Stray had seen in their 7 years of rescuing dogs.

By law, dogs must be in the pound for 7 days in case anyone claims the dogs. If a dog is microchipped, attempts are made to reunite dogs with owners. In the case of Winston, he had clearly been abused and it is no surprise that there wasn’t anyone looking for him when he got to the pound.

This poor boy was terribly ill when he arrived, if he hadn’t got to the pound sooner, it is unlikely that he would have survived. It is so fortunate that whilst the majority of us are working from home or furloughed, it can be an opportunity for people to nurse dogs like Winston back to health.

The rescues gave Winston his name and are so grateful for financial aid from their supporters to enable Winston to be transported to Bournemouth. The moment he stepped out of the car was the beginning of his new life, where he can be loved, comfortable and protected by the wings of Staffie and Stray Rescue and his loving foster home.

The rescue would like the public to read Winston’s story as food for thought, as they are seeing increasing numbers of bulldog breeds into rescue. These dogs are often purchased for around £2000 for a puppy, it is believed that Winston had been used for breeding and then discarded.

Recently, the introduction of Lucy’s Law was enforced by the government (6th April) stating that anyone wishing to purchase a puppy or kitten must do so by going direct to a breeder or a rescue centre instead. Licensed dog breeders must show puppies interacting with their mothers.

If a business sells puppies or kittens without a licence, they can now face fines or be sent to prison for up to six months. The law is named after Lucy, a Cavalier King Charles Spaniel who was lucky enough to be rescued from a puppy farm where she was subjected to terrible conditions.

Puppy farms work with third-party sellers or ‘dealers’ to distribute often sick, traumatised, unsocialised puppies which have been taken away from their mother at just a few weeks old.

Whilst there is still a long way to go with the issue of over breeding, it’s a big step in the right direction. Staffie and Stray will only ever advocate adopting a rescue, it is such a rewarding experience. Particularly when we are reminded by poor Winston.

His plight is shared by an unimaginable number of dogs used and discarded by backyard breeders. Just a few months later, Winston’s foster home decided to adopt him, which is the best news ever!