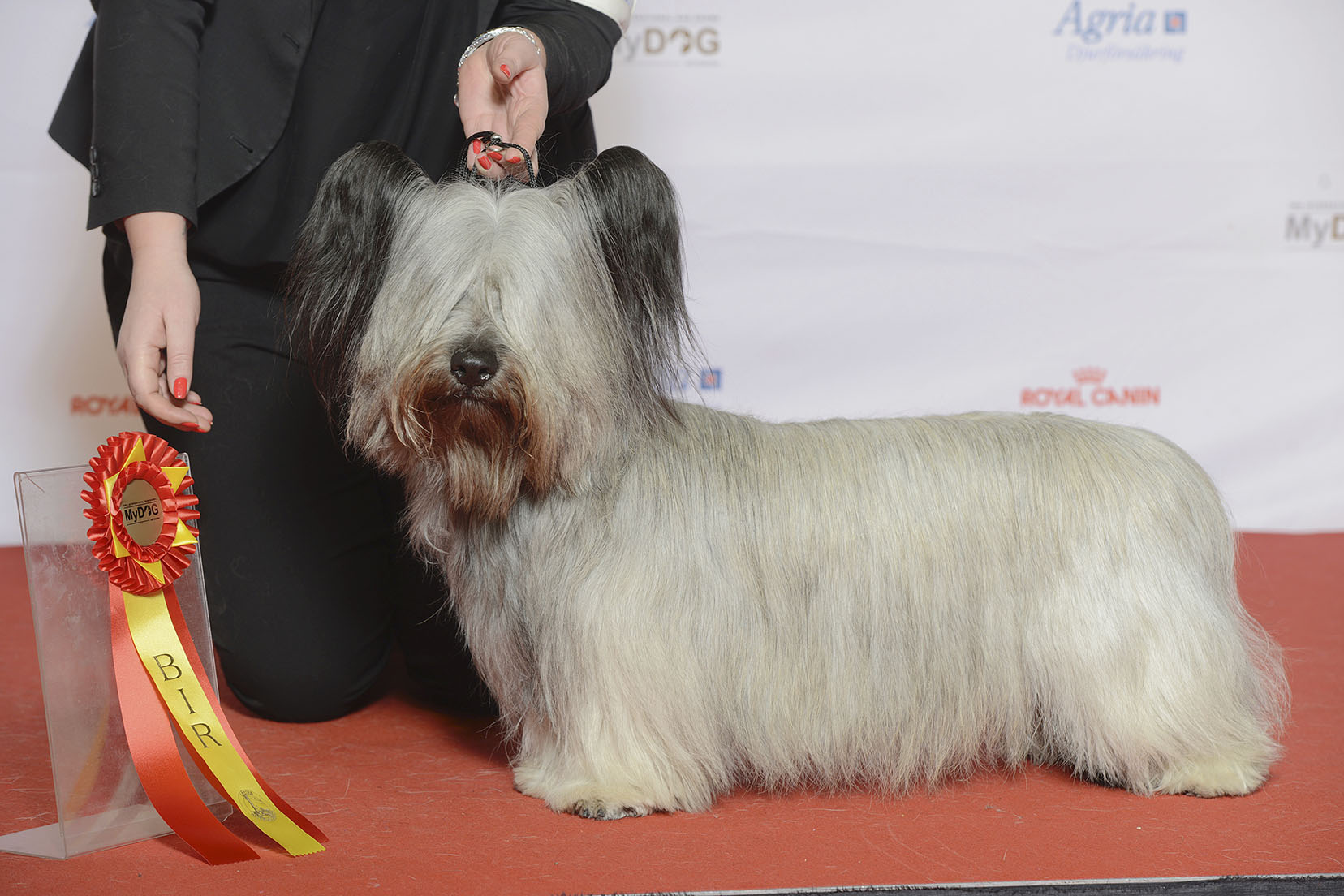 The Skye Terrier is a Vulnerable Native Breed with fewer than 100 KC registrations each year. Once owned by Queen Victoria herself, today, we’re going to take a look into this long, low, and hardy Terrier!

One of Britains native breeds, the Isle of Skye Terrier, partially helped in the development of all Terrier breeds from Scotland. Unfortunately, this dog has now found itself on the Kennel Club’s Vulnerable Native Breeds list as of 2004. In 2019, there were only 53 Skye Terrier puppies registered with the KC.

To combat its ever-declining numbers the Skye Terrier Club created a DNA bank in 2006. Skye Terrier enthusiasts are hopeful the more they expand the breed’s gene pool and DNA base, the less chance the breed will fall victim to extinction.

Find out the pros and cons of the Skye Terrier dog breed below:

The Skye Terrier is a medium-sized dog breed typically remembered by its long fringe of fur. The Kennel Club describes the breed as ‘elegant and defined’. Eyes are typically dark brown and coat colours are found in Black, Grey, Cream, and Fawn, with black noses and ears.

Skye Terriers are confident, feisty, active and robust dogs who are deeply loyal to their owners. So much so, if they’re left alone for long periods of time, they’ll develop separation anxiety. This breed has a stubborn streak and on occasion will have a mind of its own!

As a member of the Terrier family, courage and fearlessness are embedded into its personality. Skye Terriers are now used as companions but still share traits related to their working background. They can be a handful at times but are still suitable for determined first-time owners and seniors.

This breed is distrustful of strangers but shouldn’t react aggressively. He won’t like being touched by somebody he doesn’t know! The breed is an exceptional watchdog as they’re always on the alert. Socialize the Skye Terrier puppy with people to prevent its suspicious nature from resulting in aggression.

Family homes with children above the age of 6 are better suited for the Skye Terrier. This breed may feel overwhelmed by smaller children constantly invading their space. Skye Terriers are feisty and will snap if they’re being teased. As an active breed, they’ll be a great playmate and loveable companion for older children.

Skye Terriers aren’t super dog friendly. They’re not the sort to run into the dog park making friends here there and everywhere! This breed is a little dominant and won’t back down if challenged. They can live alongside other dogs but aren’t a cat-friendly breed.

Recommended: Interested in the Terrier family? Check out this guide on the Scottish Terrier.

The Skye Terrier dates back to the 14th century and originates from the Inner Hebrides of Scotland. Their name is derived from the Island of Skye but it isn’t possible to trace their exact roots.

Some believe the breed came to Scotland as survivors of a shipwreck with the Spanish Armada. These dogs were then bred with local canines thus producing the Skye Terrier although today’s modern breed is heavier coated. But many think the breed’s creation is attributed to the dogs brought over by Vikings.

Initially, this canine was bred to hunt vermin, patrolling the land of farmers. By the 1600s Skye Terriers. who were already working farm dogs, became popular with island farmers as fox and badger hunters. It’s also a popular sport amongst British aristocracy so it’s no wonder why they were greatly loved by the upper class.

In the 19th century, Queen Victoria took a fancy to the breed and became a proud owner to a Skye Terrier named Islay. This of course increased its popularity amongst the circles of the Victorian elite. A statue of the dog is found outside the Queen Victoria Building in Sydney, Australia.

Due to their Vulnerable Native breed status, potential owners interested in Skye Terrier puppies will have to join a waiting list. Despite once being popular in the UK and USA, even receiving their AKC recognition in 1887, their numbers just haven’t increased.

Skye Terriers require up to 1 hour of exercise each day. If their activity needs are met, this breed can live happily in an apartment. Due to its strong prey drive, Skye Terriers should only be allowed off-leash in enclosed spaces.

Owners must take great care when exercising their Skye Terrier puppy. As an achondroplastic breed, excessive exercise will damage their growing joints. This will affect their growth plates leading to further health issues.

Mental stimulation is important for the intelligent Skye Terrier. They love to explore so take them to new environments where they can discover new smells! Dog sports is also a form of mental stimulation and Skye Terriers excel in obedience, agility and earth dog events.

A brush twice a week with a pin or soft bristle brush is all this coat needs. It should be left in its natural state with no trimming or clipping of the fur. Skye Terriers should be hand-stripped several times a year to keep their coat healthy.

Baths will be needed twice a month as their coats quick up dirt and debris quickly. Don’t be rough when shampooing as this can cause the coat to mat. Their ears need a weekly clean and nails trimmed fortnightly. Brush teeth weekly to prevent dental disease.

Check out the breed-related health conditions of the Skye Terrier dog below:

Strong-willed and stubborn, yet sensitive, the Skye Terrier won’t take well to harsh correction. Positive training methods and rewards will quickly grab this eager to please Terriers attention! Thanks to its intelligence, they’ll quickly grasp commands.

For a Terrier, respect training is deeply important. They’re a dominant family and must understand whose boss, otherwise they’ll take that position themselves! Never let them break the boundaries without correction as these smart canines will quickly learn their bad behaviours are accepted.

Although this breed is more open to training than their other Terrier counterparts, they may need some extra help along the way. Group puppy classes are a great place for Skye Terrier puppies. Here they can learn new commands whilst learning to socialize with other people and dogs.

Unsocialized Skye Terriers can quickly develop Small Dog Syndrome. This behavioural condition is also caused by mollycoddling a small dog. It could land them in a lot of trouble with a dog much bigger in size. A Skye Terrier will need extensive socialization with people, dogs and sounds to grow into a well-rounded dog.

Recommended: All done reading? Then have a look at the Japanese Shiba Inu!