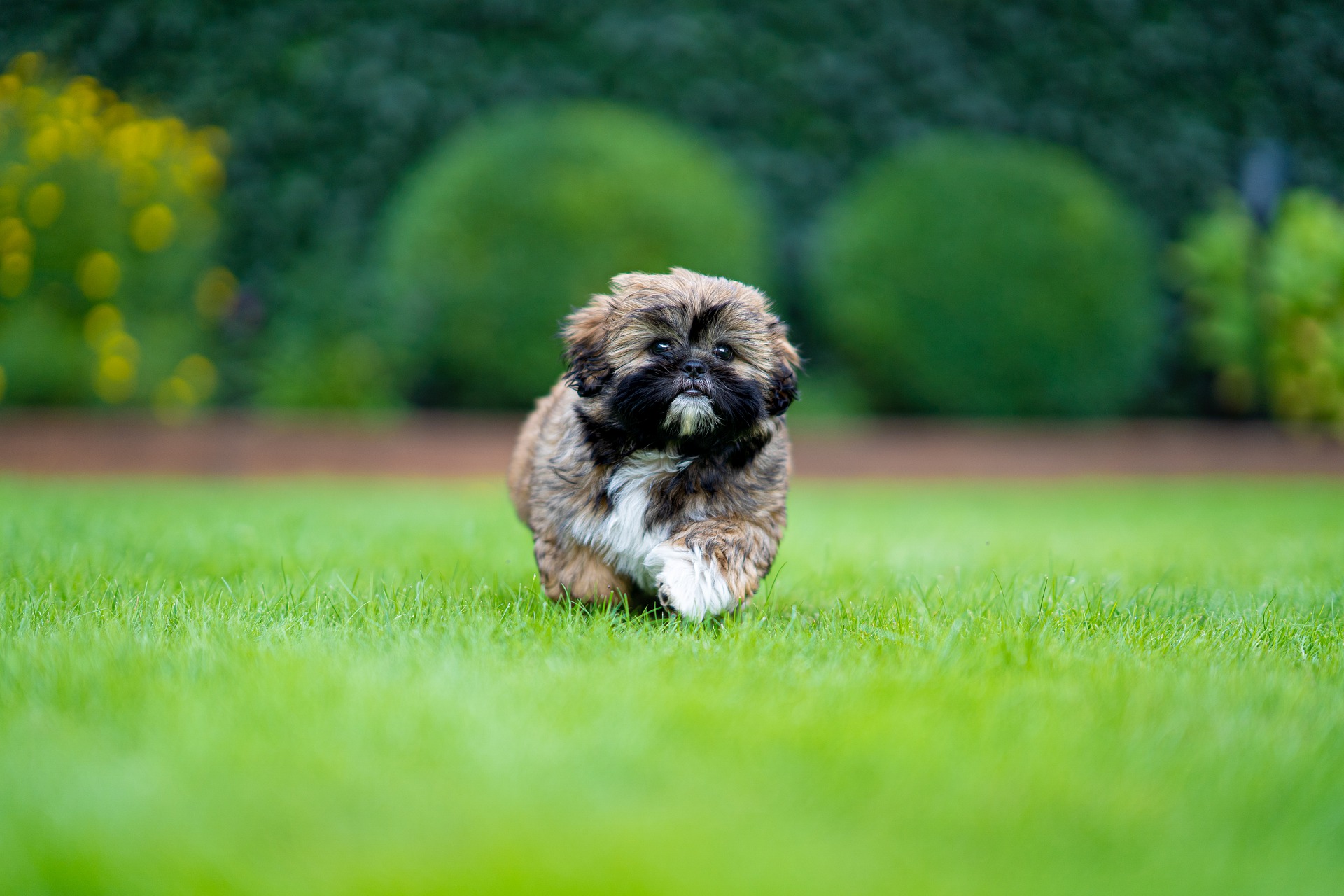 The Little Lion dog is Britain’s 17th most popular breed as of 2020! An Asian toy breed that’s prized for its lapdog status. Learn all about this vivacious breed in our guide below.

Shih Tzu dogs are lively little companions that have made it into Britains Top 20 Dog Breeds! These confident characters won’t be intimidated easily! They just love being involved in a busy household and can even be described as a clown!

As a lap dog, this breed doesn’t like being by itself. They could develop separation anxiety if alone for long periods. Despite their somewhat arrogant appearance Shih Tzus are incredibly sweet-tempered and are better suited to households where at least one person is home during the day.

Due to their small stature, these canines don’t make great guard dogs. However, they do make ideal watchdogs. They’ll bark at strangers knocking on the door but will typically be polite and even friendly. They’re a people-oriented breed that loves attention.

In a family environment, the Shih Tzu fits in well. They’ll bond with all members in their household although may follow one particular person around. Younger and older children are suitable for this breed but their small size could put them at risk of injury. Children must be taught how to handle small animals.

When it comes to other dogs, the Shih Tzu personality is welcoming and playful. They just love socializing with other canines and thrive in homes with other dogs. As one of the more cat-friendly breeds, Shih Tzu can get along well with a feline counterpart!

Have a look at the pros and cons of the Shih Tzu traits below:

The Shih Tzu is a toy breed recognised by its distinct eyes, short snout and long coat. Their coat colours can be found in black, brindle, white, liver, dark brown, blue, gold, black & white, liver & white, and light brown. Combinations of these colours may also be seen.

The ancient Shih Tzu breed originated from Tibet, China and has been documented in history over the last 1,000 years. It’s believed they’re a cross between the Lhasa Apso and Pekingese, two other Tibetan breeds.
Shih Tzu were developed in the palace of the Chinese Emperor and their name stands for ‘Lion Dog’.

Kept in monasteries, these little canines were prized by Tibetan monks for their loyalty and use as a watchdog. In 1928 the Shih Tzu arrived in England by Lady Brownrigg, wife of General Douglas Brownrigg. They brought over a black and white male named Hibou and a female named Shu-ssa.

Together they produced a litter. Hibou went on to have further litters. One of which with Lung-fu-ssa, a Shih Tzu brought back to Ireland in 1933 by Mrs Hutchins. Many small oriental breeds were classed together until receiving individual recognition in 1934.

The Brownriggs were responsible for creating the first breed standard and named the canines Tibetan Lion Dogs. In 1940, the breed received their Kennel Club recognition. Unfortunately, World War II hindered their popularity with Shih Tzu puppy registrations dropping to their lowest ever.

In 1951, to pressure the AKC into recognizing the Shih Tzu, breeders were told not to import to the USA! Today, however, they are one of the top dog breeds in both American and the United Kingdom. Not only are they great companions but are also popular as therapy dogs.

Small and petite this toy breed doesn’t need an excessive amount of exercise. An hour a day will do the trick! Sometimes a run around the garden is enough to satisfy them. Outgoing and lively, this breed loves walking through the park and meeting new friends.

Split their day into two brisk walks. Let them sniff around as this is a form of mental stimulation. Puzzles and toys are other ways to keep their minds ticking over. Without stimulation and exercise, destructive habits can quickly arise.

Their long, silky, double coat is hypoallergenic and low shedding. An ideal choice for any allergy sufferers. To prevent knots brush their coat daily, although most owners prefer their Shih Tzus to have short coats.
Trim the overgrown fur around their eyes, nose, and mouth.

Food and debris can easily build-up which could lead to infections. Aim to give them a bath every three weeks. Long fur should be blowdried whereas short coats can be patted down with a towel.
Due to their heavy coat and downward ears, the breed is prone to ear infections.

Clean debris from the ear canal weekly. Be sure to trim their nails every 10 days although these may file naturally themselves. Vets advise daily brushing for good dental hygiene which is important for a small Brachycephalic dog like the Shih Tzu.

Find out the breed-related health conditions of the Shih Tzu dog breed below:

Shih Tzu puppies are relatively easy to train and work best with positive reinforcement. For this reason, they’re an ideal choice for first-time owners. They can be a little stubborn but are generally eager to please. Intelligent and quick to learn, it won’t take long for the Shih Tzu to follow basic commands.

These canines need early socialization to develop them into the friendly, sociable breed we know and love. Dogs typically react aggressively out of fear and the Shih Tzu is too small to defend itself in a fight!
Although they have an independent streak, because of their lapdog status Shih Tzu don’t like being left alone.

They will need training and should never be left for longer than 4 hours. Crates can be used as a safe space and is a place the dog can retreat to for comfort. Crate training is also great for housetraining. The Shih Tzu can be a little difficult to housetrain, especially if they don’t have access to a garden.

By setting up a routine, the dog will know what to expect of their day and when to expect their potty breaks. It can take between 4-8 weeks to fully housetrain a Shih Tzu puppy. By providing some form of structure a dog can settle and adjust to its new life easier.

Training classes are a fantastic place to learn commands whilst socializing. Training requires patience and sometimes a busy life can hinder this. Dogs are highly impressionable during puppyhood so it’s important they receive all the necessary training during this period.