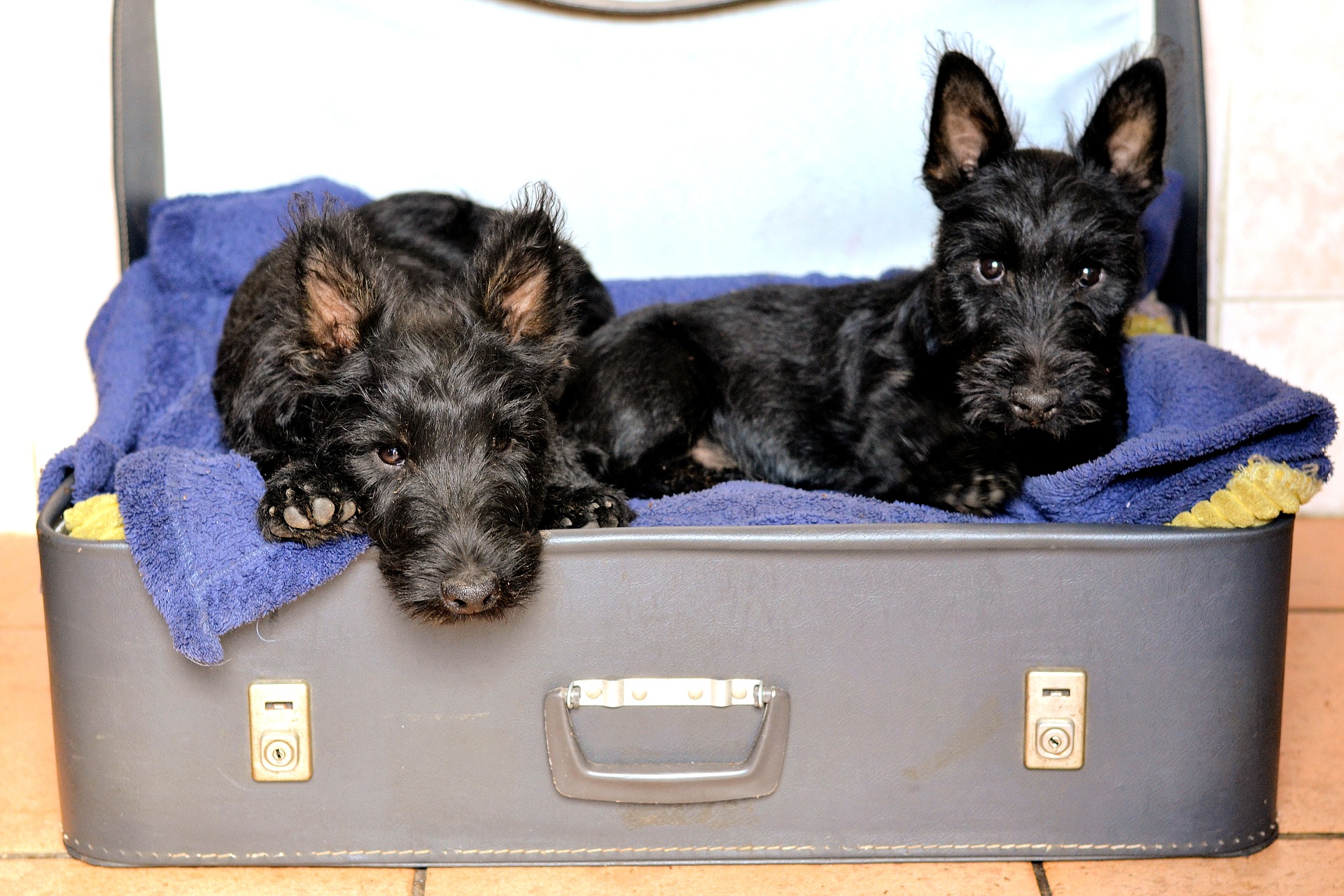 Once listed as a Vulnerable Native Breed, this sturdy pooch just wasn’t ready to become extinct! Recently, their popularity has increased and they’ve lived up to their nickname the Diehard Breed! Check out this guide to learn more!

Scottish Terrier dogs will display the typical Terrier temperament! They may be small but they are certainly mighty! A small dog with a big personality. Despite their size, Scottish Terriers are sturdy and more robust than other small breeds.

Independent, strong-willed, and stubborn, this canine needs a pack leader, not a pushover! They are alert and can be fiesty so it’s important they’ve been well-socialized. Scottish Terrier dogs are vocal and will make themselves known.

Part of the Scottish Terrier temperament is their wariness of strangers. It’s a trait that makes them excellent watchdogs. Scotties will immediately bark at the door to any unknown visitors. They won’t be the first to happily greet a newcomer. Scotties will be reserved.

Some Scotties are suited to one person as opposed to sharing the same bond with each family member. They are playful and energetic but have been known to snap at younger children. For this reason, only homes with older children should consider the Scottish Terrier breed.

Dominant by nature, the Scottie can easily cause a brawl in the park. They can be aggressive and won’t back down especially with those of the same sex. To them, the size of their opponent doesn’t matter! If raised together Scotties can live alongside another dog or cat.

What are the positives and negatives of owning a Scottish Terrier?

The Scottish Terrier coat colours are found in black, wheaten, and brindle. Grey and mixtures of black and brown have also been seen. They are short-legged and are classed as a small breed.

Scottish Terriers originate from the Scottish Highlands and were previously classed as Skye Terriers. The breed dates back to the 1700s although the development of the Scottie didn’t take place until the late 18th century.

Scotties were bred to hunt vermin on farms. These earth dogs would hunt rabbits, foxes, otters, rats and more! The dogs would ‘go to ground’ an expression that describes a dog who follows its prey into its den!

It was common practice for working Scottish Terriers to have their tails docked. It makes it easier for owners to drag their dogs from the dens of their prey. This prevents the Scottie from potential injury once in the burrow.

It is thought Scottish Terriers are one of the oldest native dog breeds in Britain. King James I was mesmerized by the breed and used to give Scotties as gifts. He helped boost their popularity.

In the early 1900s ‘Skye Terriers’ were separated into separate breeds. The Scottish Terrier, West Highland White Terrier, Skye Terrier, and Cairn Terrier were now independently recognised. Other names for the Scottie include the Cairn, the Highland, the Aberdeen Terrier, and Diehard.

Ideally, Scotties will need up to one hour of exercise each day. Scottish Terrier puppies will need more outdoors time split across the day. They love being off-leash provided they’re in an enclosed space. Remember, this breed still has a high prey drive and will chase smaller animals.

Scottish Terriers are highly intelligent and will need mental stimulation to prevent boredom. Hiding treats in the garden, playing interactive games, and puzzle toys are just some ways to do this.

The Scottish Terrier dog breed is low shedding and hypoallergenic. It’s a feature that makes them suitable for allergy sufferers. High grooming maintenance is required to remove dead fur. Brush through the coat once every couple of days.

The Scottish Terrier coat is hard and wiry. Baths should be given every 6-8 weeks. Part of their weekly grooming routine should include ear cleaning. Nails will need a trim fortnightly. Oh and don’t forget dental hygiene! Vets recommend this is done daily although three times a week should suffice!

Hand stripping is a grooming technique commonly seen in Terriers. Owners will remove the dead fur by hand using a stripping knife. This keeps the coat healthy and tidy. Show dogs must be hand stripped before entering the ring!

Some dogs are more predisposed to health issues than others. Below are the conditions that are seen in the Scottish Terrier.

Scottish Terriers are stubborn, a trait that can hinder training. Owners will need to be firm but patient. Keep training sessions short. These intelligent canines will pick up on commands quickly and will challenge your alpha position.

The tone of your voice matters! Your dog will pick up on whether you are happy or angry with them. Always use a softer more excited voice when rewarding your pet. A firm and deeper voice should be used for corrections.

It’s important your Scottie understands exactly whose boss! Respect training is highly important for this breed. Socialization is another aspect owners will need to focus heavily on.