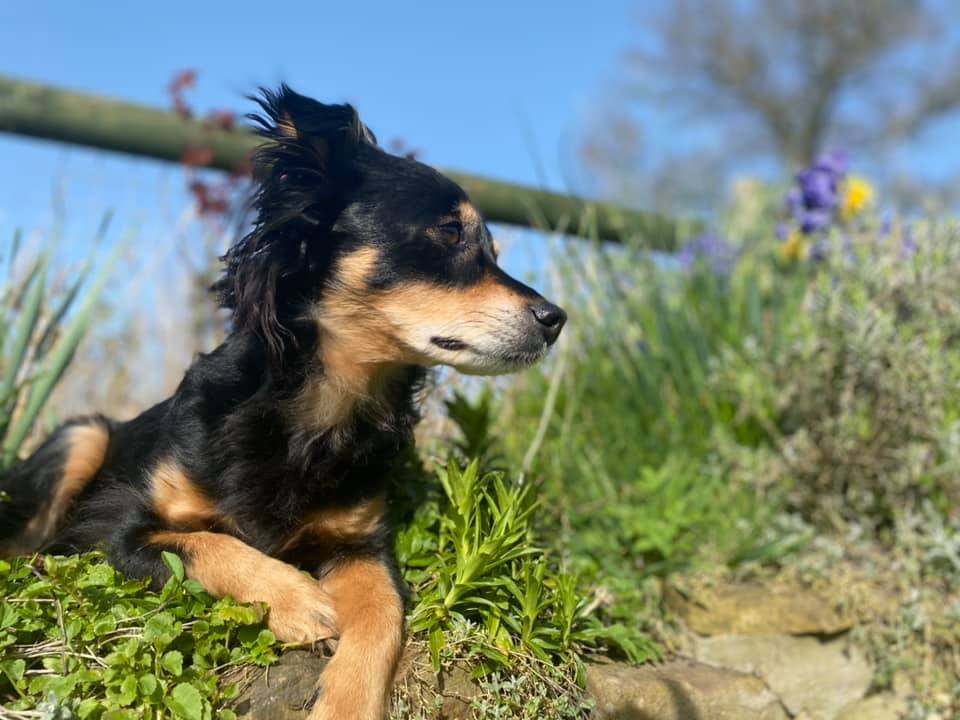 Rico is a remarkable dog up for an award for simply being a Superdog! Vote for Rico, the Kokoni at the Superdog Awards here! This good boy definitely deserves it!

The course was going well, then during one of Rico’s trials to find some missing
scent (truffle oil) all of the course attendees could hear the panicked cries of
“HENRY” “HENRY”.

Rushing out into the car park at the Felin Puleston Outdoor centre the course attendees found a local family, The Jones. Their recently rescued Tibetan Terrier, Henry, had run off on his walk around Erddig 3 hours earlier.

More family members had turned up to join the search, but poor, shy Henry was nowhere to be found. The family had already contacted Missing Dogs Team Wales (see poster above) and
Henry’s photo and information was all over social media and local networking groups.

Unfortunately, with Henry being rescued during lockdown the family hadn’t
managed to get his microchip details updated, which was adding to their distress. If
he was found, would anyone know he belonged to them?

Rachel who works as a professional dog trainer, and clinical animal behaviourist has
for the last 18 months been training her pet dog Rico in the fun dog activity of pet
trailing with Becky Smith, at Pet Trailer U.K.

This giant game of hide and seek teaches dogs to search for missing pets using their nose. However due to Covid-19 restrictions, the pair had not done any fun scent trails for months, and they have certainly never helped in the case of a genuinely missing dog before.

Rachel was watching the situation in front of her unfold, wondering if having never
done a search for a real missing dog before, and with 6-year-old Kokoni X, Rico
being tired from 2 days of training, could they help at all?! Was it worth trying?

Deciding that she couldn’t possibly just stay quiet and not help, the next hurdle to
overcome was finding a scent article of missing dog Henry. A scent article is what
the trailing dog, in this case, Rico, uses to establish who or what they are trying to
find.

With limited options available, Rachel picked Rico up and popped him in the
boot of the family’s car. The car doesn’t just smell of Henry though, it smells of the
whole family and their other dog, a beautiful Golden Retriever.

To try and reduce this problem, Rachel then let Rico sniff each of the 3 family members at the scene where Henry last was sighted, and their other dog so that Rico could eliminate them from his search.

Off the pair went – on the search for Henry, accompanied by one of his family
members to approach Henry if he was spotted, as he is nervous and would likely flee
if approached by a stranger.

Rachel tells us more:
“Pretty early on Rico indicated across a river twice but I couldn’t get across. It was
too deep and the other side of the riverbank was rocks enclosed in the metal mesh
which I could never scale.”

“So we had to go the long way round, we went back over a bridge and then Rico re-joined the trail at the point he had indicated to. He walked straight past a food bank where Rico literally ignored all the food, as he was focused on the task in hand.”

“He kept telling me to go through a broken-down, discarded lorry with the back down,
but I couldn’t get down there. Instead, I picked him up onto a 5ft wall. He walked
along the top to the end. Indicating again under a tunnel but there was no path, no
safe way for us to go.”

Rachel had to come up with another solution, so she took him off working and
walked round to the original search point. Again Rico had to rejoin the trail.

“This time he took us through some hellish undergrowth to the other side of where he
indicated before. Again, we couldn’t get through 6ft high green metal fencing. No
way under, over or round.”

Rico tried every route the group could find but sadly as the evening started to draw
in, Henry still wasn’t found. Rachel said “I was disappointed, but I also trust Rico implicitly and knew he was on to something. We just couldn’t find a point to re-join the trail.”

As there was nothing more the trailing duo could do, they headed home where
Rachel shared the story on her Instagram account (@NosetotrailUK) urging owners
to get a decent scent article for their pets by following @PettrailerUK’s step by step
guide.

You never know when your dog may go missing, and if Rico is going to help
your pet be found – he needs something to work from!

Hours later, the Jones family decided to go and have one more look for Henry.
Exactly where Rico had taken them, the family found their dog!

The owners contacted Rachel on her Facebook page @Nosetotrailpetservices
saying “Thank you so so so much for today!!! Please thank Rico for us!! We found
him exactly where Rico was taking us!!! He was spot on!!! xxxx”. Proud dog mum!

Quite right too don’t you think? Rico, originally a rescue dog himself who was due to be put to sleep in Portugal due to being without a home has saved the day. Getting shy Henry home and out of the horrible weather!

Since word of Rico’s amazing work finding Henry has spread, he has been
nominated for a Naturo Super Dog Award. The Awards highlight the incredible work done by dogs across the UK.

If you think Rico is a Super Dog then you can vote for him here;
Rico – Naturo SuperDog Awards
Don’t leave it too long to vote as this stage of the competition closes on the 30th of September 2021!