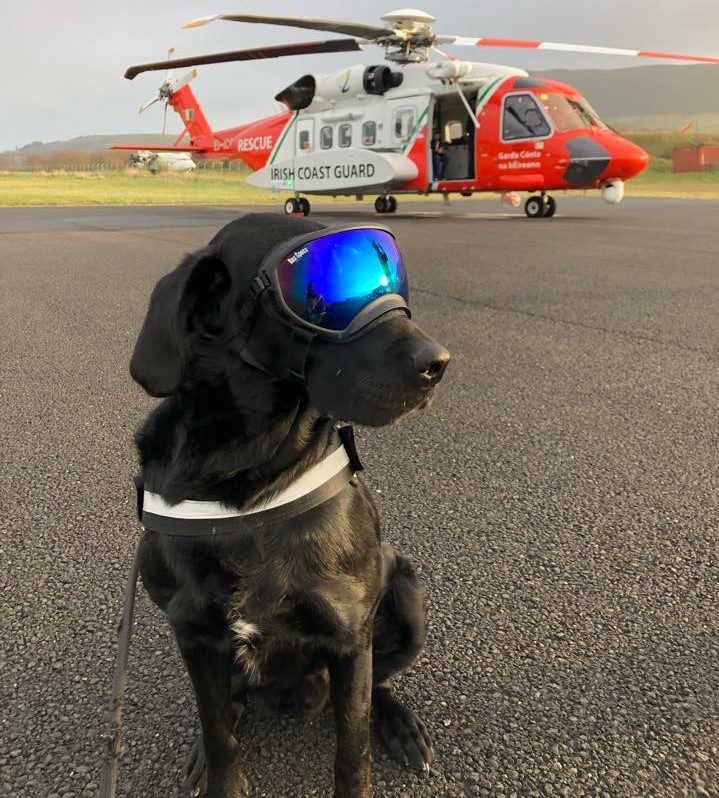 In December 2016, a beautiful young 3-year-old black Labrador was handed into the Sanctuary. His owner could no longer care for him due to significant health issues. After just a few weeks with us, Max found his new home and was adopted by Ryan.

Ryan, a full-time maritime officer with the Coastguard, had identified a real need for trained air scenting dogs to help coastguard teams on the ground.  Not long after adopting Max, Ryan saw real potential in Max and subsequently began to train him in live air scenting.

This training can take anything from a year to a year and a half but after a year Ryan felt Max was fully trained and qualified to start work searching for missing and vulnerable people with the Coastguard teams.

In October 2018, Ryan got a call in the middle of the night from a family whose fear and worry was growing as their loved one had been missing for over 40 hours. They had heard of Max and the work he had been trained to do and were desperate for help in trying to find their loved one.

Before Max had fully graduated to become an official search dog, Ryan took Max to search the area where the family had last seen their loved one. Max got to work sniffing and searching and doing what he had been trained to do.

After just 8 minutes into the search, Max bolted up a lane of an old house where there was an abandoned car sitting. He began scratching and pawing at the boot. Ryan investigated this further and managed to open the boot to find the missing woman inside and in need of immediate medical attention.

Following treatment from medical staff, Ryan was told that had the woman not been found and remained there any longer in the freezing temperatures, she would not have survived.

In 2019, Max and K9 Search and Rescue were tasked by the Coastguard in a search for a missing teenager alongside coastguard teams. Max got to work and very quickly picked up a scent in a specific area which led to the team along with some divers searching the area.

The team and divers subsequently recovered the body of the missing teenager. Although this is an incredibly tragic and sad outcome, it highlights the importance of the work that search dogs like Max do. In this case, search teams were able to focus their resources on the area Max had identified and in turn, were able to find and return the loved one back to the family as quickly as possible.

Now a fully qualified search dog, Max, has and continues to be involved in countless searches all over Northern Ireland and is responsible for finding and returning people back to their loved ones. Albeit, sadly, not every case has a happy ending.

He has gone from strength to strength, so much so that Max is now also trained to search coastal, urban and rural areas as well as collapsed buildings for disaster response throughout Northern Ireland. He also participates in multiple training exercises throughout the year, showing other teams what his capabilities are.

One example of this is Max being used in helicopter rescues and being able to be winched in and out of them to access difficult areas in certain rescue situations.

Ryan has now recruited an entire team bringing on 5 other dog handlers, our very own Dylan being one of them! As well as supporting search technicians also trained in water rescue. Included in the team are 4 other new search dogs, all in training, one of which was also a rescue dog, this time from Dogs Trust and learning from the best – Max!

Max is a fantastic example of what can become of a rescue dog and proof that not every dog is affected for life from their past experiences. With the right training, care, support and attention most rescue dogs can become and overcome anything!

Check out the Assisi Animal Sanctuary: