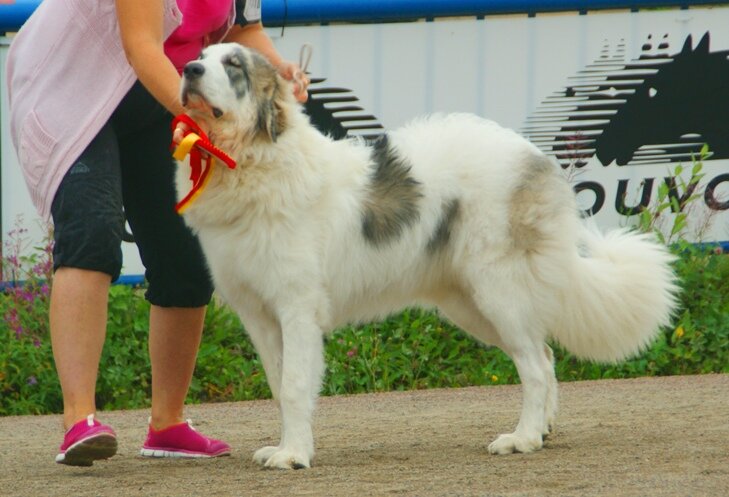 One of the world’s lesser-known Mastiff breeds is the Pyrenean Mastiff. It’s rare to see this dog in the UK but they are still popular working dogs on the Pyrenees Mountains. Today we’re going to take a look into this canine’s background.

Despite receiving this recognition, there is no official KC breed standard. This means the Pyrenean Mastiff is not allowed to be exhibited at KC licensed breed shows. They’re not to be confused with the Pyrenean Mountain dog or the Pyrenean Shepherd.

Check out the pros and cons of the Pyrenean Mastiff dog breed below:

The Pyrenean Mastiff is a giant, strong and muscular breed yet in spite of this, they’re not known to be sluggish. In fact quite the opposite! Their double-coat is thick with a basic colour of white. Patches of a darker colour such as Grey, Gold, Brown, Black and Beige is found across the body.

The best term to describe this breed is as a ‘Gentle Giant’. They really are kind and affectionate dogs that’ll form strong bonds with their family. Due to its independent nature, Pyrenean Mastiffs aren’t easily affected by separation anxiety.

Intelligent and easy to train, this dog will excel in the hands of an experienced owner, even if they’re a senior. As this Mastiff has a stubborn side, first-time owners should steer clear. This guardian was bred to protect both humans and animals, so it’s important they don’t develop any possessive habits over their family.

This guardian does exceptionally well in a family environment. Growing up, they’ll be a little boisterous and their size could accidentally injure smaller children but never intentionally. For this reason, homes with older children are better suited. They’ll protect every member of the family, young, old, human, or animal!

Sociable with other dogs and friendly towards all animals, this canine is great at making friends! They can live in households with other pets including felines. Despite their intimidating size Pyrenean Mastiffs are a placid and calm breed.

Recommended: Learn about the English Setter, a Vulnerable Native Breed.

The Pyrenean Mastiff dog dates right back to the Middle Ages and is a descendent of the Mollosser dogs. Mollosoid breeds were brought from Assyria and Sumeria to Spain over 3,000 years ago. They came with the Phoenicians, an ancient civilization, from what we now know as Lebanon.

During the Middle Ages, there were two Christian kingdoms Castille and Aragon, an area today known as Spain. The Pyrenean Mastiff was developed in the Aragon region in the rugged terrain of the Pyrenees Mountains. Here they would protect and guard livestock alongside shepherds.

As the herd would migrate through the mountains, the Pyrenean Mastiffs, who often worked in groups, would have to defend the livestock from bears and wolves! Spiked collars were worn to protect them from these predators.

Sheep were transported by rail and the Spanish Civil War and World War II was taking place. This almost wiped out the Pyrenean Mastiffs entire existence. By 1970 wolves had returned to Aragon which resulted in a breeding programme for the Pyrenean Mastiff. They increased their size and numbers, which allowed the breed to spread into different countries.

Pyrenean Mastiffs need up to one hour of exercise each day. Pyrenean Mastiff puppies are more boisterous but care must be taken to ensure they aren’t over-exercised. It’ll be damaging for their growing joints. Split their walks across the day as opposed to one long walk.

Mental stimulation is important for a smart canine like this one. This working breed is at its happiest when it has something to do! Teach him some advanced tricks and get his mind to work! A bored Mastiff can quickly destroy any home in seconds!

Take the Pyrenean Mastiff to a big open space where they can enjoy some off-leash time. They love exploring and it’s also a form of mental stimulation. Thanks to its relatively low prey drive, Pyrenean Mastiffs won’t dart off to chase a small animal.

Pyrenean Mastiffs shed copious amounts of fur throughout the year. Brush through their coat every three days to prevent matting and reduce shedding. A wide-toothed comb, grooming rake and slicker brush are all ideal to use on their fur type.

Baths should be given every 6-8 weeks but the longer the better. Trim the fur in between their toes as this can form into mats. Clip their nails every fortnight to prevent overgrowth. The long floppy ears of the Pyrenean Mastiff are prone to infection so ears must be cleaned weekly.

Below are the breed-related health issues of the Pyrenean Mastiff:

In the right hands, these intelligent canines are easy to train. However, they can be stubborn so an experienced owner is recommended. This breed will quickly pick up on commands but can also grasp bad habits just as fast.

Socialization is deeply important to raise the Pyrenean Mastiff into the even-tempered breed we know and love. These canines are renowned for being gentle and placid. They’ll only resort to aggression when pushed. But it’s still important to socialize the breed due to its natural suspicions of strangers.

Positive reinforcement works best for this canine. If the Pyrenean Mastiff doesn’t want to do something it won’t do it. Keep training sessions to around ten minutes long. If they begin to lose interest divert their attention to something new.

As this breed is prone to weight gain, avoid dishing out too many food treats. Toys are a good replacement. Training goes hand in hand with exercise. If their activity needs aren’t being met, they’ll resort to destructive behaviours.

Recommended: Enjoying this guide? Then check out the Caucasian Shepherd.