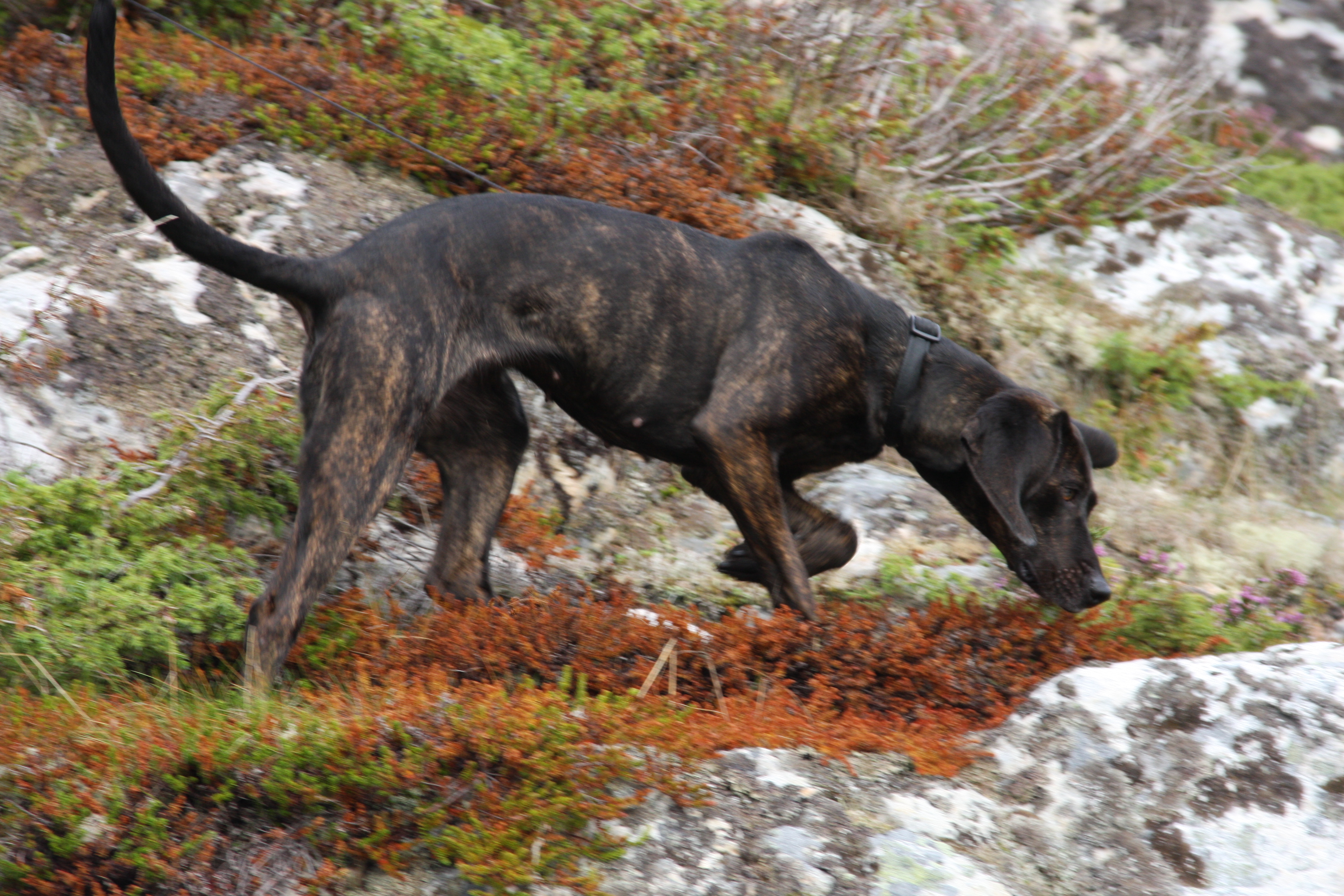 The Plott Hound is the official State Dog of North Carolina. This remarkable breed is prized for its hunting and tracking abilities. Today we’re going to look into the background of the Plott Hound.

The Plott Hound is not recognised by the Kennel Club here in the United Kingdom, however, they were first exhibited at the Westminster Kennel Club Dog Show in 2008. This scenthound was initially bred for bear hunting over 200 years ago. The North American breed is rare in the UK but still used for hunting, typically in North America.

This scenthound is one of the few that doesn’t trace its ancestry back to the English Foxhound. Plott Hounds are also the only non-British Coonhounds. Most Hounds were primarily imported into the United States via England, France and Ireland for fox hunting. Unlike the Plott Hound which was developed in North Carolina.

Below are the pros and cons of the Plott hound dog breed:

Plott Hounds have an athletic build and are both agile and muscular. They hunt well independently or in a pack. The breed is found in all shades of Brindle and features a long tail and glossy coat. Unlike other scenthounds, this breed doesn’t have baggy skin.

Plott Hounds are aggressive hunters and work in packs. So, it should be no surprise that this breed holds a strong prey drive. The Plott Hound is not recommended to first-time dog owners. They’re also unsuited to apartment living and do best when raised in the countryside as opposed to the city.

The Plott Hound has webbed feet making this breed an exceptional swimmer! They’re affectionate, loyal, and protective of their families. Like most members of the Hound family, the Plott Hound is independent and stubborn. They’re highly intelligent and won’t forget a dog or person that’s crossed them!

Plott Hounds are great guard dogs. They’re protective of their homes and territory and will bark at strangers approaching their domain. Plott Hounds won’t hesitate to protect their family if they sense danger. The breed is aloof towards strangers and will need early socialization to prevent fear-based reactions.

This breed is suited to families with older children. Plott Hound dogs will be affectionate and protective over the children in their household. This breed could become food aggressive so it’s important owners tackle this at the very beginning, especially when there are children in the home.

Plott Hounds that are bred to hunt large game are known to be more aggressive than those that hunt smaller game. As this breed hunts in packs, they do better in homes with other dogs. They are typically social with dogs outside their household but can be dominant towards those of the same sex.

The Plott Hound originates from Germany and is a descendant of the Hanover Hound. Their ancestors were initially bred for Boar hunting due to their stamina. Plott Hounds have the skills to hunt large game such as Boar, Mountain Lions and Bears. They’re also suited to hunting smaller game such as racoons.

In the late 18th century Georg (Johannes) Plott (1733-1815) migrated to North Carolina from Germany with his wife Margaret. He also brought with him five Hanoverian Hounds and although there are no official records stating where he lived, his son Henry settled in the mountains of western North Carolina.

Both the Plott Hound and the Plott Balsams (a mountain range in western North Carolina) were named after the Plott family. The breed was developed in North Carolina and trained to hunt bears by Johannes. The Hanoverian Schweisshund strain was kept pure until 1780.

It was in this year, that the pack of Hounds were passed down to Johannes’ son Henry Plott. He decided to breed the Hanover Hounds to local dogs, producing a large game hunter we now know today as the Plott Hound. Originally named ‘Plott’s Hound’.

There are six Coonhound members which include the Carolina Plott Hound. The only non-British member of the group and the last to be recognised in 1946. The breed is not registered with the Kennel Club but did receive its AKC recognition back in 2006.

The Plott Hound requires at least one hour of exercise each day, but they could definitely do with much longer! Thanks to their webbed feet this breed is a great swimmer. Swimming is a fantastic form of exercise! Plott Hounds also require lots of mental stimulation and this scenthound needs time to investigate the smells around them.

This breed requires a garden and is best suited to the countryside. Due to their strong prey drive, gardens must be securely fenced. Thanks to their intelligence and agility, this breed is an excellent escape artist. They’ll dig and even climb their way out of an enclosed space if they find a way!

Plott Hounds should also be kept on a leash unless in a remote area or enclosed dog pen. Despite their high energy levels, the Plott Hound won’t make a good jogging partner as their nose will easily divert them! A long walk twice a day will keep this breed satisfied. A lack of exercise will result in boredom leading to destructive behaviours.

A Plott Hound has a thick, yet smooth, fine coat. It’s low maintenance and requires a quick weekly brush once a week. The best tools to use are soft-bristle brushes or a Hound glove. To prevent doggy odour, the Plott Hound should receive a bath every 6+ weeks.

This breed has long ears that assist their tracking abilities. They’ll need frequent cleaning, especially after a wet and muddy walk. Debris should be removed from the ear canal weekly. Failure to do so could cause ear infections. Trim their nails fortnightly and brush their teeth at least three times a week.

Below are the breed-related health conditions of the Plott Hound:

Gastric Dilatation Volvulus (Bloat): A life-threatening condition typically caused by large meals that lead the stomach to dilate. The stomach twists trapping the contents and gases within.
Hip Dysplasia: One or both of the hip joints develop abnormally causing swelling, pain, lameness, and eventually arthritis. This condition is typically inherited.

Although independent the Plott Hound is eager to please which helps ease training. Experienced dog owners are recommended for this breed. Their leader must be firm yet patient, a timid dog owner will quickly be dominated by the Plott Hound.

Positive reinforcement works best with this breed and early socialization is a must. Harsh training techniques will enhance this breed’s stubborn side. Plott Hounds are known to be forgetful so repetition is key. If there’s an older dog in the household, the Plott Hound will typically follow their lead.

Group puppy classes are a great way to socialize a Plott Hound puppy whilst learning basic commands. This guard dog can be wary of strangers so it’s important they are socialized with humans to prevent fear-based reactions. A lack of proper training will lead to dominance and aggression issues.