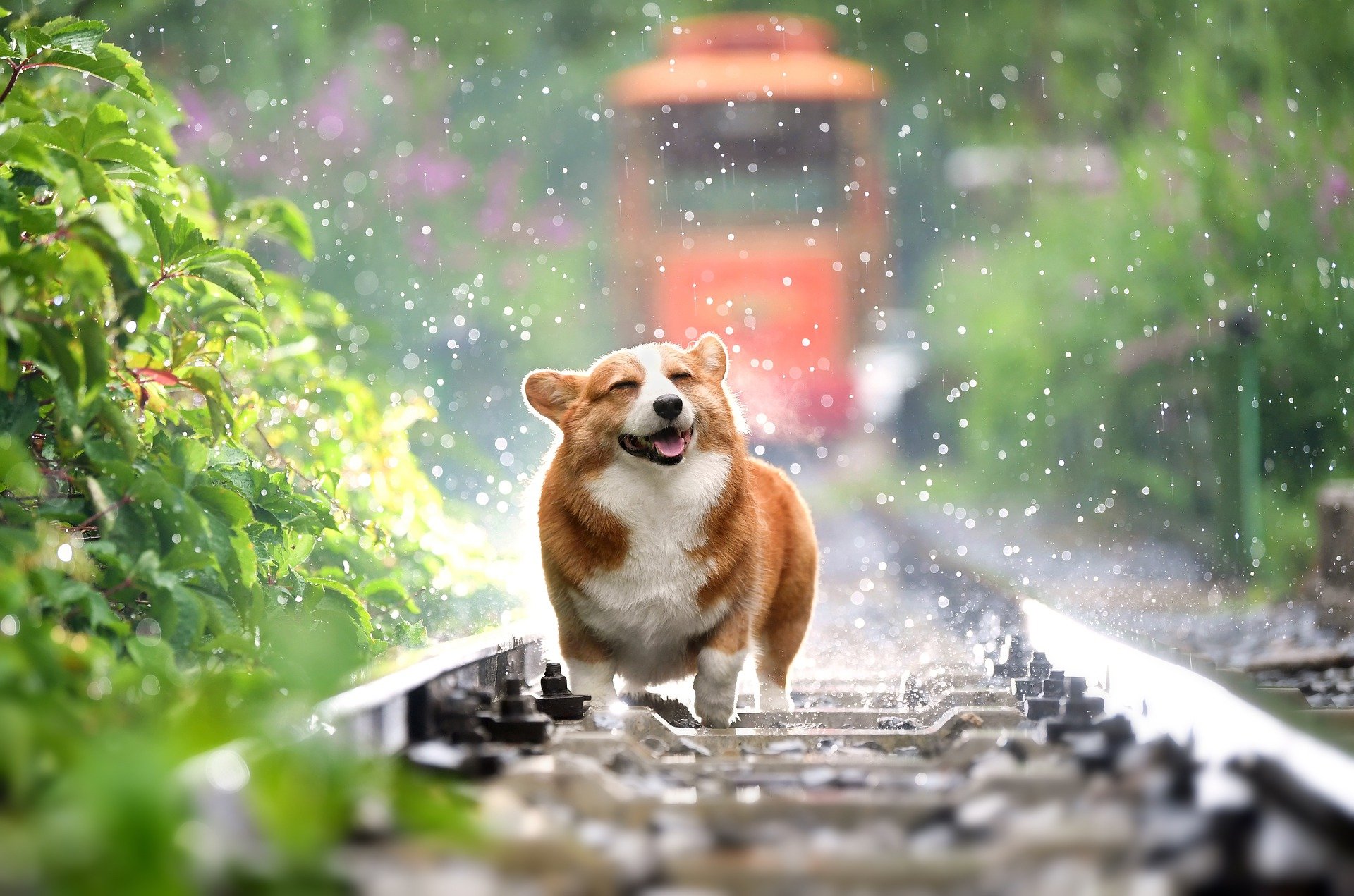 The Welsh Corgi is one of Britain’s most well-known dogs. They’re famously known as our Queen’s favourite breed, who is often surrounded by her faithful pack. Let’s take a look into Britain’s prized dog breed!

The Pembroke Welsh Corgi is mostly recognized due to Queen Elizabeth II’s adoration of the breed. Since her accession to the throne in 1952, the Queen has owned over thirty Corgis! They’re often referred to as the Royal Corgis! Her fondness began after her father King George VI brought home Dookie, the Corgi.

Below are the pros and cons of the Pembroke Welsh Corgi:

The Pembroke Welsh Corgi is a medium-sized breed with a fox-like head and pointy ears. Their fur is typically lighter on the sides as the withers reduce in thickness. Coat colours consist of Fawn & White, Sable & White, Red & White and Tricolour.

Now the Welsh Corgi may be a dwarf breed but their size shouldn’t underestimate their personality! This breed holds a unique personality and is also incredibly loyal. As the Pembroke Welsh Corgi is eager to please, they’re a good breed choice for first-time dog owners.

High in energy, the Welsh Corgi will need some form of vigorous exercise during the day. However, Corgis can live happily in an apartment provided their activity needs are being met. As this breed loves to be around their owner they have a low wanderlust potential.

The Welsh Corgi is often reserved with strangers but generally polite with household visitors. Alertness is a trait found in the Corgi so they make great watchdogs. Socializing a Corgi puppy is highly important as it’ll enable the dog to be more trusting of strangers in adulthood.

A Corgi is one of the more low-maintenance dog breeds and makes an excellent family dog. They’re great with children and are easy to train. Due to their herding background, they may display these types of behaviours towards children. Households with smaller children must be aware of this before bringing a Corgi puppy into the home.

Corgis do get along with other dogs but are a little warier than other breeds. They can happily live alongside other dogs in their household. The breed can be around cats but should be introduced during puppyhood. Regular socialization during their early years will prevent fear-based reactions.

Legend has it that two children were playing in a field and stumbled across a pair of puppies. At first, they thought they were foxes but after taking them home, their parents quickly realised they were dogs! The parents told their children the dogs were gifted to them by fairies that lived in the field. The marks on the Corgis back represented the fairies saddle!

The foundation dogs of the Welsh Corgi arrived in Southwestern Wales in 1107. They were brought by Flemish Weavers from Northern Belgium who were invited to live and work in Wales by King Henry I. The Cardigan Welsh Corgi is a cousin of the Pembroke Corgi but is slightly bigger and longer. They also have smaller ears and straighter legs.

Welsh Corgis are herding dogs and were used for cattle, sheep and horses. They’d often be found working on farms. Traditionally, the Welsh Corgi was docked, however, since the ban, this is no longer being practised in the UK. This led to a drop in breed numbers landing the Welsh Corgi on the Vulnerable Native Breed list.

Welsh Corgis need up to one hour of exercise each day. If their exercise needs are being met, they can happily live in an apartment. As the Welsh Corgi is an achondroplastic breed their legs are susceptible to injury. Pembroke Welsh Corgi puppies shouldn’t be overexercised. Owners should be cautious of their joints until their growth plates are fully formed. This takes place around the ages of 9-12 months.

Due to their herding background, Welsh Corgis require lots of mental stimulation. Hide and seek with food treats, puzzle games and dog sports are some ways to do this. Welsh Corgis compete well in agility, showmanship, tracking, obedience, flyball and herding events.

This breed is used to hard work so some Corgis may still be high in energy. Although a dwarf breed, the Welsh Corgi can reach up to speeds of 25mph! They enjoy long walks or even a slow jog but aren’t quick enough to be a cycling partner!

Brush the Pembroke Welsh Corgi with a slicker brush once a day to remove any dead fur. During shedding seasons a rake will help remove the undercoat. The fur won’t need trimming and can be left natural during the summer months, despite the heat.

Corgis should be bathed every 4-8 weeks. Brush through the coat prior to it getting wet to avoid tangles. Ensure all shampoo is washed out of the fur to prevent skin irritation. Use a blow dryer to dry the coat as wet fur will pick up debris. Clean the ears weekly and trim the nails fortnightly.

Below are the breed-related health conditions of the Pembroke Welsh Corgi:

Bladder Stones: A collection of minerals form in a dog’s bladder resulting in crystallised formations that could lodge in the urethra, preventing urination.
Hip Dysplasia: The hip joint develops poorly which will cause the ball and socket of the hip to rub and grind against each other. This will cause pain, lameness, inflammation and eventually arthritis.
Epilepsy: A common neurological condition causing unprovoked seizures in dogs.
Von Willebrand’s Disease: A blood platelet deficiency prevents the blood from clotting thus causing excessive bleeding.
Intervertebral Disc Disease: Discs separate the bones of the spine. IVDD is the degeneration of one or more of these discs. It’s an age-related condition that typically affects achondroplastic breeds such as the Pembroke Welsh Corgi.
Lens Luxation: An inherited condition mostly seen in Terrier breeds. The zonular fibres holding the lens in place are weakened causing the lens to wobble or fall out of place. It’s painful and could cause permanent blindness.
Cataracts: An opacity (cloudiness) in the lens of the eye. If large enough, it will block light from reaching the retina, leading to blindness.

Welsh Corgis are eager to please, an excellent trait that helps ease training. First-time owners are suitable for this breed. At 8 weeks a Welsh Corgi puppy can begin learning basic commands. Socialisation is another important part of training that should start at this age. Introduce Welsh Corgi puppies frequently to new people, places, and dogs.

Harsh training techniques won’t work on this canine! Patience, consistency and positive reinforcement methods are better suited to this breed. Pembroke Welsh Corgis are highly independent so it’s easy for them to break away from their training and display bad behaviours. Ensure they are never allowed to break the rules!

Corgis are relatively easy to housebreak. Dogs, in general, don’t like to potty in their sleeping areas. This natural instinct eases housebreaking although some breeds are more difficult than others. It’s best to set up a routine across the day with regular toilet intervals so a Corgi learns to follow this.

This breed is listed by the Kennel Club under the pastoral group. Their herding background can cause Welsh Corgi puppies to become excessively mouthy. Stop a Corgi from nipping at the heels, chewing and herding by disciplining and redirecting these behaviours.

Its important Corgis are taught respect training first. This should then be followed up with obedience training. Corgis must acknowledge their owner’s leadership position. If this breed is allowed to run rings around its owner, its behaviour will quickly spiral out of control.