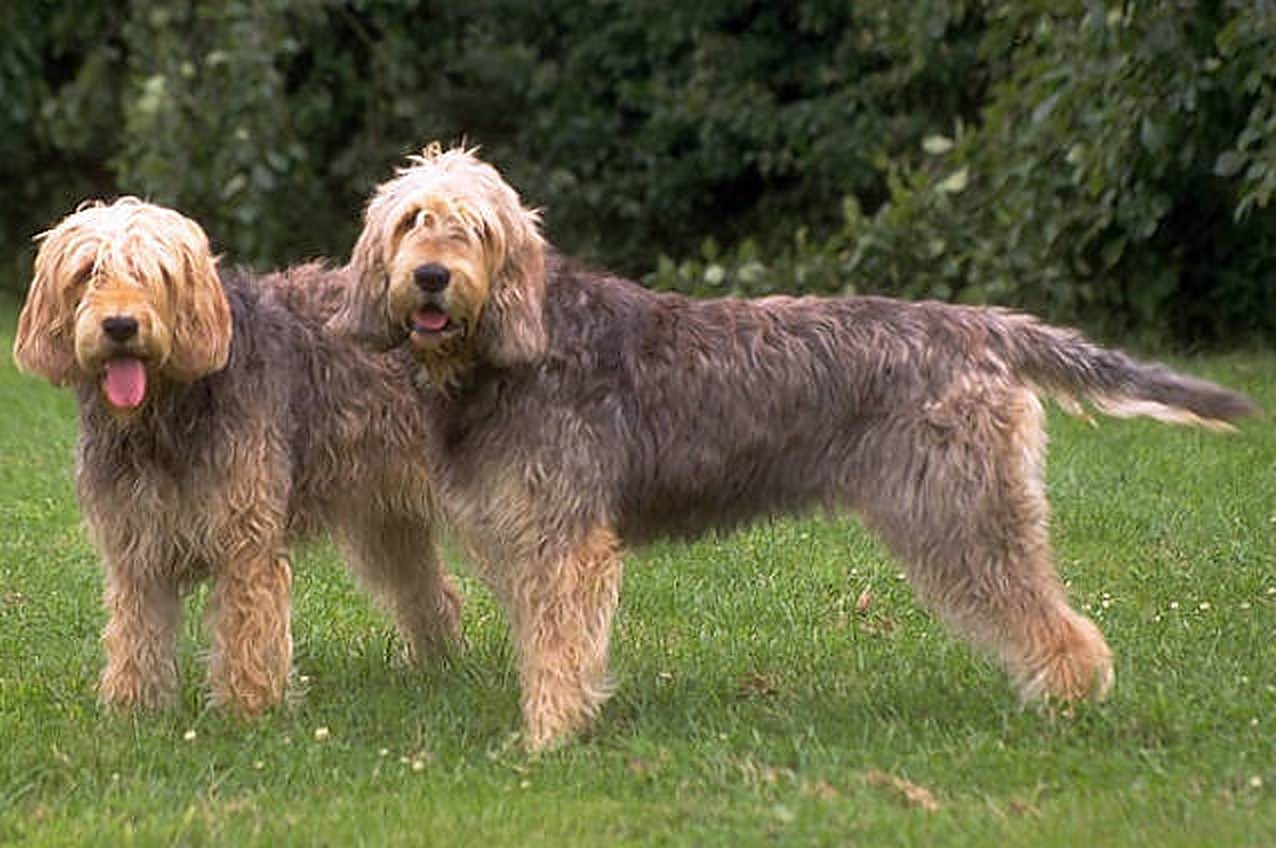 The Otterhound is a scenthound dating back to medieval Britain. They’re currently classed as a Vulnerable Native Breed. Let’s take a look into this rare and special canine.

In 2020, only 7 Otterhound puppies were registered with the Kennel Club. Now it’s estimated there are under 2000 Otterhounds left in the world! Today, this breed is seriously at risk of extinction.

As of January 2021, all imported Otterhounds must be DNA tested for Glanzmann Thrombasthenia, a blood-clotting disorder. Due to the small number of Otterhounds left, it’s important this genetic disorder isn’t passed through the remaining few bloodlines.

Check out the pros and cons of the Otterhound dog breed below:

The Otterhound is a large dog breed with a rough coat and long floppy ears. Their double coat is waterproof and their feet are webbed, excellent for swimming. Coat colours are found in Liver & Tan, Black & Tan, Blue & Tan, Red, Wheaten, Blue, Black & Cream, Tan & Liver, and Tan & White.

The even-tempered Otterhound is an endangered hunting breed so naturally, it has a strong prey drive. This dog can be suitable for a determined first-time owner. Otterhounds are affectionate, loving but a little boisterous during their puppy years.

Independent by nature, this canine isn’t prone to separation anxiety. But this trait does require a patient owner. Playful and amiable, the Otterhound is a pleasure to have in the home, provided their exercise needs are met!

Otterhounds aren’t watchdogs or guard dogs. They’ll probably bark at the knock of the door but that’s about it. Aggression and nervousness aren’t found in the Otterhound personality. Some will be friendly and welcoming to visitors whilst others are a little more reserved.

Children will find a forever friend in the Otterhound! An excitable playmate with buckets full of energy! This large breed dog could accidentally knock over smaller children but won’t harm them intentionally.

When it comes to other dogs, the Otterhound is friendly. However, they’ll probably view small dogs as prey so keep them leashed. They can live in a home with other canines. An Otterhound puppy should be reared with a cat for the best possible outcomes.

Recommended: Which human foods are toxic for dogs?

The Otterhound is native to Britain and dates right back to the medieval era. The earliest mention of a similar dog to the Otterhound is in 1360! Otters would eat lots of fish, a source of food for humans too. So, a dog was needed to reduce the number of otters.

Over time, the Otterhound was developed. The breed was first officially noticed in the 1800s. Many believe the Otterhound’s ancestry is linked to French and English Hounds. It’s confirmed the Grand Griffon Vendéen, Bloodhound and Griffon Nivernais was bred into some Otterhound lines.

Otterhounds are excellent hunters both on land and in the water. These scenthounds have a remarkable tracking ability and can follow scents for hours. Their stamina is something the breed has retained to this day.

In 1978, Otter hunting stopped. Whilst it hasn’t been banned, the drastic drop in otter numbers meant the animal was now listed as protected species. As a result, this meant the need for Otterhounds lessened and breed numbers took a hit.

Today there are only two pure Otterhound packs left. They’re known as the Carmarthenshire and Pembrokeshire Minkhounds. However, their hunting bloodlines aren’t ideal for those looking solely for a companionship dog.

Otterhounds require an incredible amount of daily exercise. They’ll need over two hours each day some of which needs to include vigorous play. A run around the garden isn’t enough for this dog!

Unless in an enclosed space the Otterhound shouldn’t be allowed off-leash. Their strong prey drive isn’t worth the risk. This dog loves the water and their webbed feet and oily coat makes them great swimmers. Aim to take them swimming every now and again.

Mental stimulation is hugely important for this intelligent dog. Puzzle games, exploring, and interactive play are some forms of mental stimulation. Dog sports such as obedience, agility, and tracking are also good for the Otterhound.

Brush through their coats twice a week to remove dead fur. Use a slicker brush or comb. Their fur won’t require trimming and should be left as natural as possible. Keep their beards clean by wiping their mouths after eating.

Baths them every 1-3 months depending on how dirty the Otterhound gets! Their long, floppy ears will be prone to infection so clean them weekly. Be sure to trim their nails every ten days and don’t forget to brush their teeth!

Recommended: What are the signs of dental disease?

Find out the breed-related health issues of the Otterhound dog below:

Hip Dysplasia: Hip joint laxity is caused by the abnormal growth of the hip joint. Lameness and pain will be experienced which will eventually lead to arthritis.
Epilepsy: A common neurological condition in dogs that causes uncontrollable seizures.
Bloat: Typically seen in large, deep-chested breeds, this condition causes the stomach to enlarge and twist. It’s a life-threatening condition.
Glanzmann Thrombasthenia: A bleeding disorder caused by the abnormality of specialized cells use for blood clotting. It’s a genetic disorder.
Panosteitis: Also known as growing pains, Panosteitis is commonly seen in dogs from 5 months to 12 months. Dogs will outgrow this condition but shouldn’t be exercised until symptoms are gone.

Otterhounds have an independent side that can put a strain on training. However, they’re also highly intelligent and will quickly pick up on commands. They can be a little sensitive so use positive training techniques.

Recalling this dog is one of the harder commands to practice. If this dog gets a whiff of something, they’ll be off! It’s important to begin training the second the Otterhound puppy enters its new home.

Routine is great for both humans and dogs. Set a daily schedule so the dog can learn to follow it. It’s also an ideal way to housebreak the Otterhound. Exercise goes hand in hand with training. A dog pent up with energy is easily distracted.

Clicker training is a good method for Otterhounds. Use the click at the exact moment the dog perfects the command. Offer a reward at the same time as the click. Repeat this and over time the click will eventually become the reward.