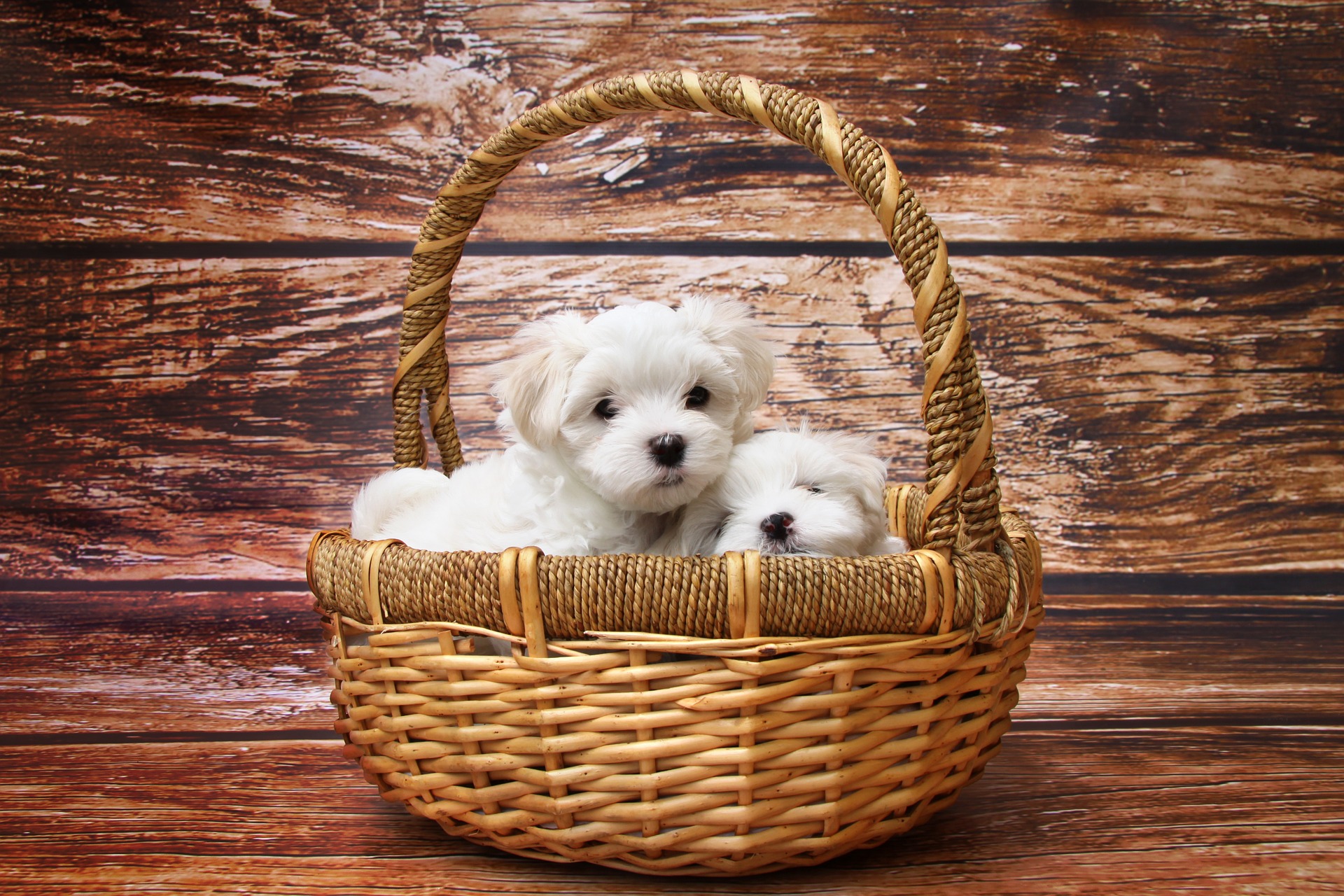 The Maltese dog is noticed by its strikingly white coat! A member of the toy group, these little canines are packed with personality. Today we’re going to take a look at the Maltese Lion Dog! Learn about their temperament, history, training, health, and more!

Maltese Dog Exercise: Up to 30 minutes per day

Small but lively, these little dogs will quickly become the centre of attention! They’re intelligent, gentle, playful, fearless, and easygoing. The Maltese dog breed is charming and has grabbed the hearts of dog enthusiasts worldwide!

A Maltese will be friendly and accepting towards strangers. They shouldn’t bark or be fearful unless they lack socialization. They’re typically brave and fearless so with the right socialization, size won’t intimidate them.

Owning a Maltese puppy can be a risk in a family household. Maltese puppies are incredibly fragile and can become injured if they’re mishandled by a child. Some breeders won’t even release puppies to families with young children!

Growing up they can be a little snappy but do settle well into family environments. They love to play and adore the attention of children. Toy breeds can become yappy when coming across other dogs.

So it’s important they receive the right socialization to prevent this behaviour. Maltese dogs can get along well with other canines but could be injured during rough play. They can live with cats but should be introduced during their early years.

Check out the positives and negatives of the Maltese Dog breed below.

The Maltese is part of the toy group and a member of the Spitz family. They have a curly tail with dropped ears that sometimes features long flowing fur. Their silky white fur is single-coated but sometimes pale ivory is seen. They have a small black nose with brown eyes.

The Maltese dog is one of the most ancient toy breeds and is believed to be from South-central Europe. Their exact origin remains unknown. One of the earliest recordings of the breed is written by Publius, a Roman Governor from 1st century Malta.

At one point in time, the Maltese are thought to have been owned by the Egyptians. Even Greek tombs dating back to the 5th century features art strongly resembling the Maltese. Some believed these tiny canines could cure diseases so they’d be placed on pillows of the ill. This earned them the nickname ‘The Comforter’.

Over the centuries Maltese dogs were prized by aristocracy and nobility. The arrival of the 15th century saw the popularity of the Maltese increase amongst French aristocrats. Soon after England took a fancy and Queen Elizabeth I, Mary Queen of Scots, and Queen Victoria were all mesmerized!

Unfortunately, in the 17th and 18th-century breeders tried to make the Maltese even smaller. This almost ruined their existence! Poodles, Spaniels, and other miniature breeds were bred back into the Maltese to save them. This lead to the creation of a variety of new breeds.

Throughout time the Maltese have had a hefty price tag. In the 1500s the Maltese price was around £1500 in today’s currency! Nowadays the Maltese dog breed is one of the most popular in the world!

A Maltese only needs up to 30 minutes of exercise each day. They’re perfectly suitable for apartments, but can be difficult to housetrain so of course, a garden would be a bonus. Maltese dogs are active and enjoy vigorous play but can become injured so keep an eye out.

Sometimes a play around the garden is enough to satisfy their exercise needs. The Maltese intelligence levels aren’t very high but they will still need some mental stimulation. These canines are very attached to their owners and are prone to separation anxiety.

Due to their silky white, non-shedding coat, the Maltese dog has high grooming needs. Daily brushing is needed to prevent and remove any knots and tangles. A comb and pin brush is the best tools to use on their coat.

Ideally, a bath should be given every 1-2 weeks. Always brush through their coat before wetting the fur as tangles are much harder to remove when wet. Blowdry their fur to prevent debris from sticking when drying.

Maltese dogs are prone to dental disease and will need their teeth brushing daily. Stains around the eyes and mouth may appear so it’s important to give these areas regular wipe downs. Their nails grow fast so give these a trim every ten days. Clean their ears weekly.

Check out the health conditions linked to the Maltese dog breed below:

Portosystemic Shunt: Blood bypasses the gastrointestinal tract going straight to the systemic circulation. This stops the blood from being detoxified. It’s typically caused by a birth defect and is also referred to as a Liver Shunt.

Luxating Patellas: The kneecap dislocates out of position temporarily before returning to normal. Affected dogs won’t be able to fully extend their knee.

Chiari Malformation Syringomyelia: This neurological condition is painful. It’ll fill the cavities of the spinal cord next to the brain with fluid. It may damage the nerves transferring messages to the brain.

Entropion: As the eyelids start to roll inwards the lashes will scratch the eye. This will cause pain, ulcers, and possible pigmentation development which could affect vision.

Cataracts: A cloudiness will appear in the eye after a change in lens. The abnormality if large enough could prevent light from reaching the retina, leading to blindness.

Microvascular Dysplasia: This inherited condition affects the liver. An abnormality of the liver’s microscopic blood vessels will decrease blood flow to the liver causing atrophy.

First and foremost, potential owners must understand the Maltese dog is not a teddy. By coddling this canine you risk causing behavioural issues. Whilst owners do fear their Maltese puppy becoming injured, they still need intense socialization to prevent anxiety.

Housebreaking a Maltese isn’t the easiest of tasks. It’s estimated to take around 1-4 months so persistence is key! Due to their small bladders, they’ll need to go outdoors more often than other breeds.

These canines are sensitive and won’t deal with harsh training techniques. Be firm but calm and use a variety of tones so they can differentiate between good and bad behaviour. Make sure they’ve had a run around before training so they aren’t easily distracted.

A Maltese puppy will test the boundaries and behaviour can quickly become unruly. Training should start the second they walk into their new home. Sessions should be kept to around ten minutes, split across the day.

Treats and toys work well as rewards. Out of the toy breed group the Maltese dog is the easier member to train, but it won’t be a breeze! The more relaxed an owner is the more stubborn a Maltese will be!