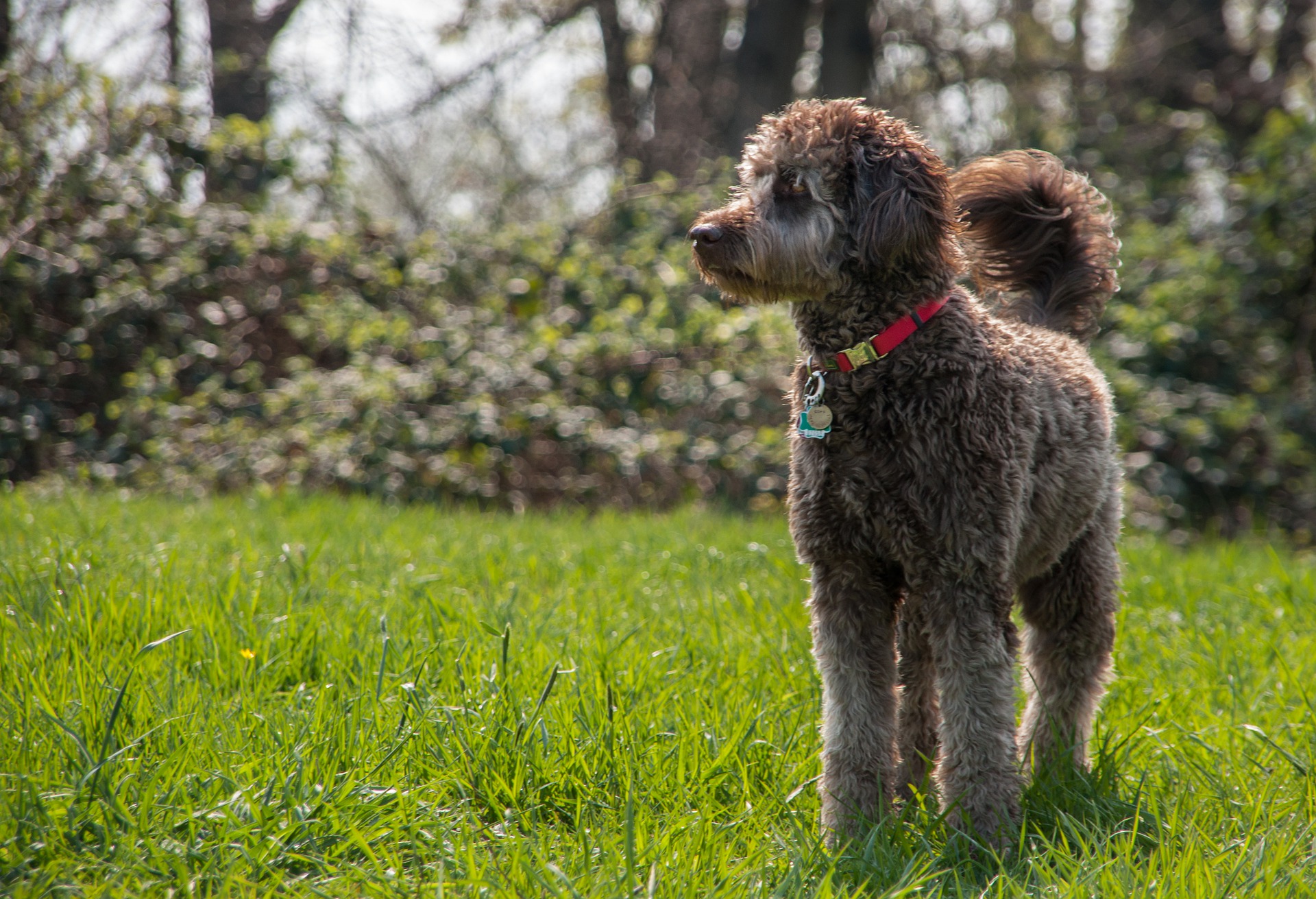 A popular designer dog created by the Poodle and Labrador. Fast-growing in popularity across the UK the Labradoodle has become one of Britain’s favourite hybrids along with the Cockapoo. In today’s guide, we’re going to learn all about this pooch!

Labradoodle dogs were first introduced by the Royal Guide Dogs Association of Australia. Since then, they’ve taken the UK by storm quickly becoming one of Britain’s favourite designer dog breeds. Although they didn’t quite match the standard for a working guide dog they’re adored as companions!

As a hybrid, these dogs aren’t recognized by any Kennel Club. Whilst many Doodles are hypoallergenic, some take more of their Labrador side which won’t be ideal for allergy sufferers. Their coat is, however, suitable for both hot and cold climates. The Labradoodle size is found in miniature, medium, and standard.

Check out the pros and cons of the Labradoodle dog breed below:

The Labradoodle is a cross between a Poodle and a Labrador. Their coat colours can be found in Caramel, Cream, Chocolate, Parchment, Apricot, Red, Black, Blue, Silver, Chalk, Cafe, Lavender, phantom, and Parti. Their coats are typically curly although some may feature more of a wave.

The Labradoodle temperament is highly sociable, intelligent, alert, affectionate, and comical. They’re easy to train and will become deeply attached to their owners. As a sensitive breed, the Doodle will quickly pick up on emotions, a trait that makes them excellent therapy dogs.

Gentle and happy, these canines are a pleasure to be around. Labradoodle puppies can be a little boisterous but are typically eager to please. Given the right socialization and training, they’ll grow to be fantastic well-rounded dogs.

Whilst Labradoodles are alert and make good watchdogs they are terrible at guarding! They’ll bark at the knock of a door but will greet strangers politely. Labradoodles will soon request cuddles and enjoy human contact.

The medium, standard, and miniature labradoodle are excellent family pets. They get on well with children of all ages but a standard Labradoodle could pose more of a risk due to their size. Labradoodles aren’t aggressive and make playful, loving companions for any child!

Sociable and friendly, Labradoodles love making new friends at the dog park. They’ll initiate play with anybody and can happily live alongside other dogs. Cats are fine but should be introduced during puppyhood.

Recommended: Have a look at Britain’s other favourite hybrid, the Cockapoo!

The Labradoodle history starts in Australia during the 1980s. Wally Conron, an employee at the Royal Guide Dogs Association Australia, received a letter from a blind woman in Hawaii. She needed a guide dog but her husband was allergic to dogs! Wally quickly got to work.

Mr Conron decided the Poodle would be great especially for their hypoallergenic purposes. A trial commenced but after testing 33 standard Poodles they just didn’t have what it takes to assist the blind. He spent a period of three years trying to figure out a solution until it dawned on him to crossbreed!

Wally had a male Poodle named Harley which he bred with a female Labrador named Brandy. Together, they produced a Labradoodle puppy litter! Of course, the breed has been crossed previously but not in an official aspect. After testing the saliva and fur of the dogs only one came back suitable for the Hawaiian couple.

The dog named Sultan undertook guide dog training before being shipped to his forever home. Unfortunately, other families didn’t want to use the remaining Labradoodles as service dogs. Instead, the Association was swamped with queries about the breed for companionship reasons.

This of course attracted unethical breeders. Some Australian Labradoodle breeding lines have included the Spaniel into the mixture. In the UK, Labradoodles quickly became one of the most popular hybrids alongside Cockapoos.

Standard Labradoodles should receive 90 minutes of exercise each day. Medium and miniature Labradoodles can settle for an hour per day. As a hybrid, these dogs are unable to compete in official dog sports.

The bigger the Doodle the more exercise they require! However, mental stimulation is just as important for all three varieties. Both Labradors and Poodles are incredibly intelligent so it’s no surprise the Labradoodle has picked up this trait.

Labradoodles are low shedders and need a brush every couple of days to keep them tangle-free. Of course, this is dependent on the texture of the dog’s coat. Every few months overgrown fur will need a trim but should never be shaven.

The Labradoodle’s coat is designed to repel dirt, so frequent baths aren’t necessary. They should be given baths every 4-6 weeks or whenever they smell! Introduce grooming techniques during puppyhood to prevent anxiety.

Long furry ears are prone to bacteria and debris build-up. This in turn will lead to recurring ear infections. Weekly cleaning is essential. Trim the nails every fortnight. Vets recommend teeth are brushed daily to promote dental hygiene.

Below are the health issues that may be seen in the Labradoodle dog breed:

Labradoodles are intelligent and easy to train which makes them suitable for first-time owners. Training should start as soon as a Labradoodle puppy arrives at its new home. Form a bond first as these dogs are sensitive and won’t take well to harsh corrections!

Positive reinforcement is the best way forward. Avoid too many food treats as Labradoodles are prone to weight gain. Toys are ideal replacements. Use a variety of tones that a dog will be able to differentiate between.

This breed is vocal and will bark a lot so it’s worth teaching them the Quiet command! Keep sessions around ten minutes long and make them fun! Start them indoors before venturing outside once they begin listening more. A Labradoodle puppy is eager to please, a trait that’s excellent for training.

Timeouts are one way to discipline a dog. By refusing them attention they’ll learn what they did was wrong. Redirecting bad behaviours is a good way to get a dog to refocus its attention. A lack of consistency is confusing so it’s important they’re told everytime they’re misbehaving.

Recommended: Finished reading? Then check out our guide on the Chinese Crested dog!