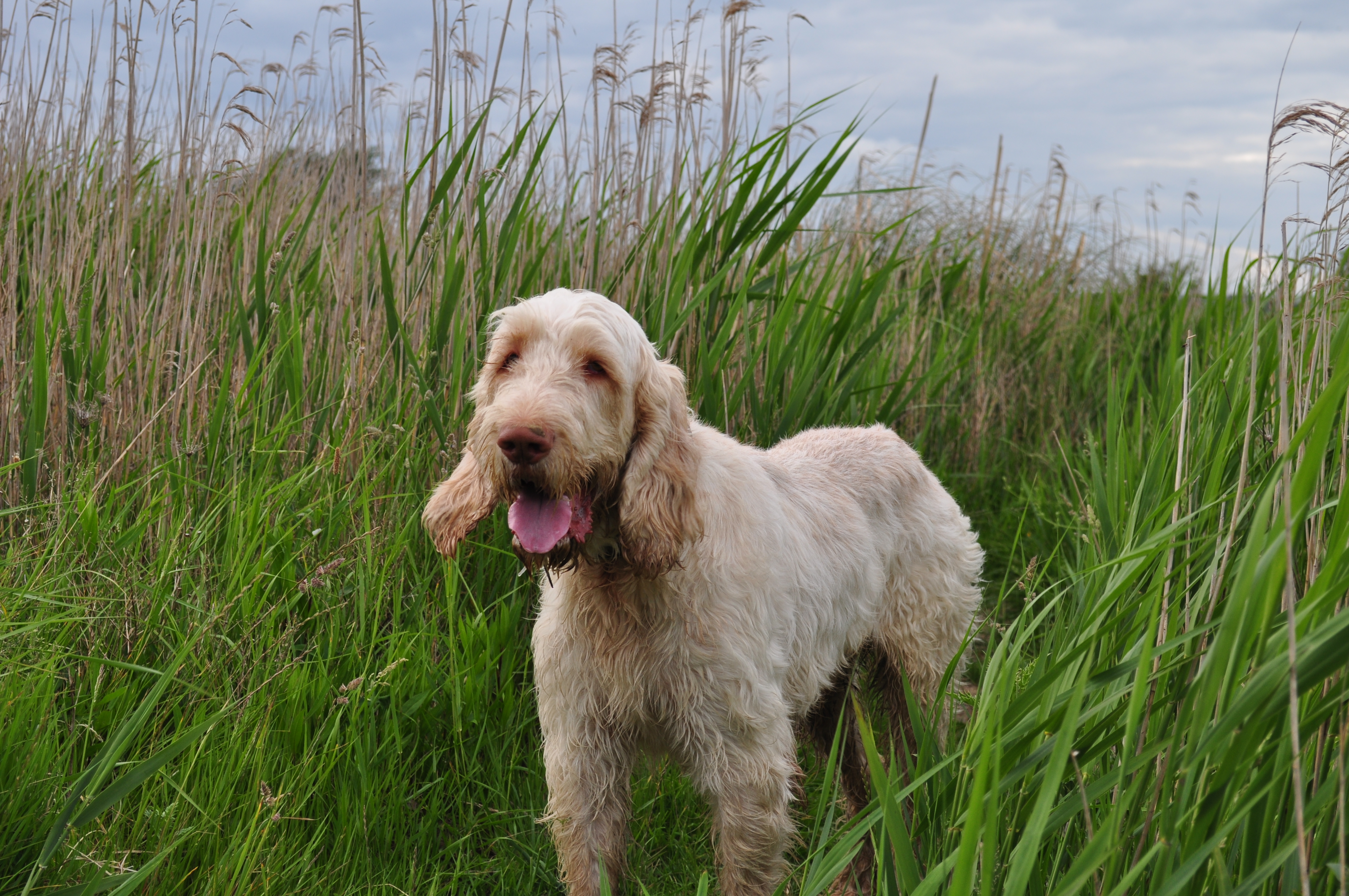 The Spinone Italiano is a robust gundog used to track, hunt and point game. The breed will work in both land and water. Let’s take a look at this versatile and hard-working canine!

The Italian Spinone is one of the world’s oldest hunting breeds. They’re prized in Italy for their versatility and are still popular gundogs today. The breed goes by several names including the Spinone Italiano, the Italian Griffon, the Italian Wire-Haired pointer, and the Italian Coarsehaired pointer. They were bred to hunt in thicker, bushier areas of the Italian countryside.

Spinoni are vocal and will let their owners know what they’re thinking! This dog has a lot of personality and expects regular cuddles! Their excellent sense of smell is a downfall in the kitchen as they’ll find just about anything! An intelligent, loving, active companion that has a growing community here in the UK.

Check out the pros and cons of the Italian Spinone dog breed below:

The Spinone Italiano is a medium-sized breed with a solid, muscular build. This single-coated dog has thick, rough fur. It’s designed to protect them from the thorny undergrowth in their native land. Their coat colours are found in Brown road, Orange Roan, White, and Orange & White.

Italian Spinoni are affectionate, loyal, patient, docile, and friendly dogs. This easygoing canine is easy to train in the right hands and can be a good choice for first-time owners. Spinoni do take longer to mature than other breeds so owners will require patience.

At times they can be stubborn but overall are pretty laidback individuals. This gundog is easily satisfied and mostly well-behaved although they do have a cheeky side! The Spinone Italiano makes a devoted companion and forever friend.

Spinoni are people-orientated and don’t make good watchdogs or guard dogs. They might be a little cautious at first but most are typically friendly towards strangers. Polite and sweet-natured the Italian Spinone is not an aggressive breed.

Family-friendly, this dog gets along well with children. Spinoni enjoy the extra love and attention received from kids! Some dogs can be boisterous in their puppy years so keep watch when around a young child. Energetic and robust, Spinoni are great playmates!

Sociable and kind, Italian Spinoni enjoy making lots of doggy friends! They can live with other dogs but should be raised with cats from puppyhood. Due to their strong prey drive, they could view small dogs as prey.

The specific origins of the Spinone Italiano are unknown. However, they’ve been a part of Italian history since their appearance during the Renaissance era. A mural painting by Andrea Mantegna of the Ducal Palace’s Camera Degli Sposi depicts the Spinone as early as 1470.

Traditionally used for hunting, tracking, pointing and retrieving, this multi-purpose gundog works on both land and in water. The modern Spinone we know today was developed in Italy’s north-western region, Piedmont.

The area of Piedmont contains an overgrowth of thorny bushes. Its referred to as Pino hence the name ‘Spinone’. The Spinone was developed to work in these difficult terrains including the hills of the Alps in Italy. They’re one of the most versatile gundogs in the world!

In World War II the Spinone Italiano was used for tracking enemies and carrying supplies. Of course, like most breeds, numbers dropped after the war. So, in 1949 the Famiglia dello Spinone was formed.

The breed first arrived in the UK in 1981 by Mrs Mary Moore. In 1994 the UK Kennel Club officially recognized the Italian Spinone. They’re most popular in Italy. In the UK 389 Italian Spinone puppies were registered in 2020.

Ideally, the Spinone Italiano should receive more than two hours of exercise per day. Some Spinoni aren’t as active and could do with 90 minutes instead. If they live in built-up areas, these gundogs should be kept on a leash unless in an enclosed space due to their strong prey drive.

Gundogs thrive off long explorations in the countryside! Allow plenty of sniffing time as this contributes to mental stimulation. The Italian Griffon is prone to weight gain so it’s important they’re kept active throughout their lives. Dog sports are a great way to keep them busy and fit!

The Italian Coarsehaired Pointer will need brushing twice a week. The fur between their legs and under their tail is prone to tangles. A pin brush, comb, and slicker brush are ideal tools to use. Long fur around the face should be trimmed.

The medium-length coat requires hand stripping to allow new fur to grow through the follicle. It’s a frequent grooming method for show dogs. Companion dogs are hand stripped around twice a year. Usually during the spring and autumn. Owners can hand strip their dogs themselves whilst others visit professional groomers.

As this breed is single-coated they won’t shed heavily. They’ll need their lip folds and beards cleaned regularly to prevent odour. Bath the Spinone leaving two-month intervals at a minimum. Their ears must be cleaned weekly to avoid infections. Don’t forget to trim nails fortnightly to prevent overgrowth.

Check out the breed-related health conditions of the Italian Spinone below:

Hip Dysplasia: The ball and socket of the hip joint develop abnormally. This causes them to rub and grind against one another. Pain and lameness are experienced which will eventually lead to arthritis.
Entropion: The eyelid turns inwards causing the eyelashes to scratch the surface of the eye. Symptoms include tearing eyes, squinting, red eyes, rubbing, conjunctivitis, infections and eye ulcers.
Atopy: A lifelong skin condition owners will have to manage as there is no cure. Frequent exposure to an allergen increases the dog’s allergic response resulting in itchy, inflamed skin.
Gastric Dilatation Volvulus: The stomach will twist filling with gasses and trapping the food inside. It’s a life-threatening condition commonly caused by fast-eating.
Panosteitis: This condition is also referred to as growing pains. It typically occurs between the ages of 5-18 months and puppies will grow out of it.
Hypothyroidism: An underactive thyroid causes a reduction in the dog’s metabolic state. Lethargy, dull skin and fur, weight gain, and fur loss are some common symptoms.
Epilepsy: A common neurological condition in dogs causing unprovoked seizures.

As a sensitive breed, this dog will withdraw from harsh training methods. Use positive reinforcement and always praise good behaviour with a reward such as a food treat or toy. A happy calm tone will attract the eager to please Spinone.

When it comes to hunting, Spinoni are pretty independent in the field. They aren’t favoured for their obedience skills! Sometimes their stubborn side shines through and can hinder training. If they become bored or simply don’t want to participate in training then try something new.

Be gentle and calm with his breed. Set a routine they will quickly learn to follow. Structure is one of the best ways to housebreak a dog. Keep training sessions to a minimum of ten minutes as Spinoni are easily distracted. Always exercise a dog so they aren’t built up with energy.

Socialization is vital to ensuring the Italian Spinone is confident in adulthood. It’s crucial to social and mental development. To prevent fearful behaviour and anxiety, introduce them to new sights, sounds, people, dogs, and places.

An Italian Spinone puppy is easy to train in the right hands. Gundogs have natural instincts out in the field. The owner will need to work on their commands and recall. Confident Italian Spinone puppies should begin gundog training at around 7-8 months.