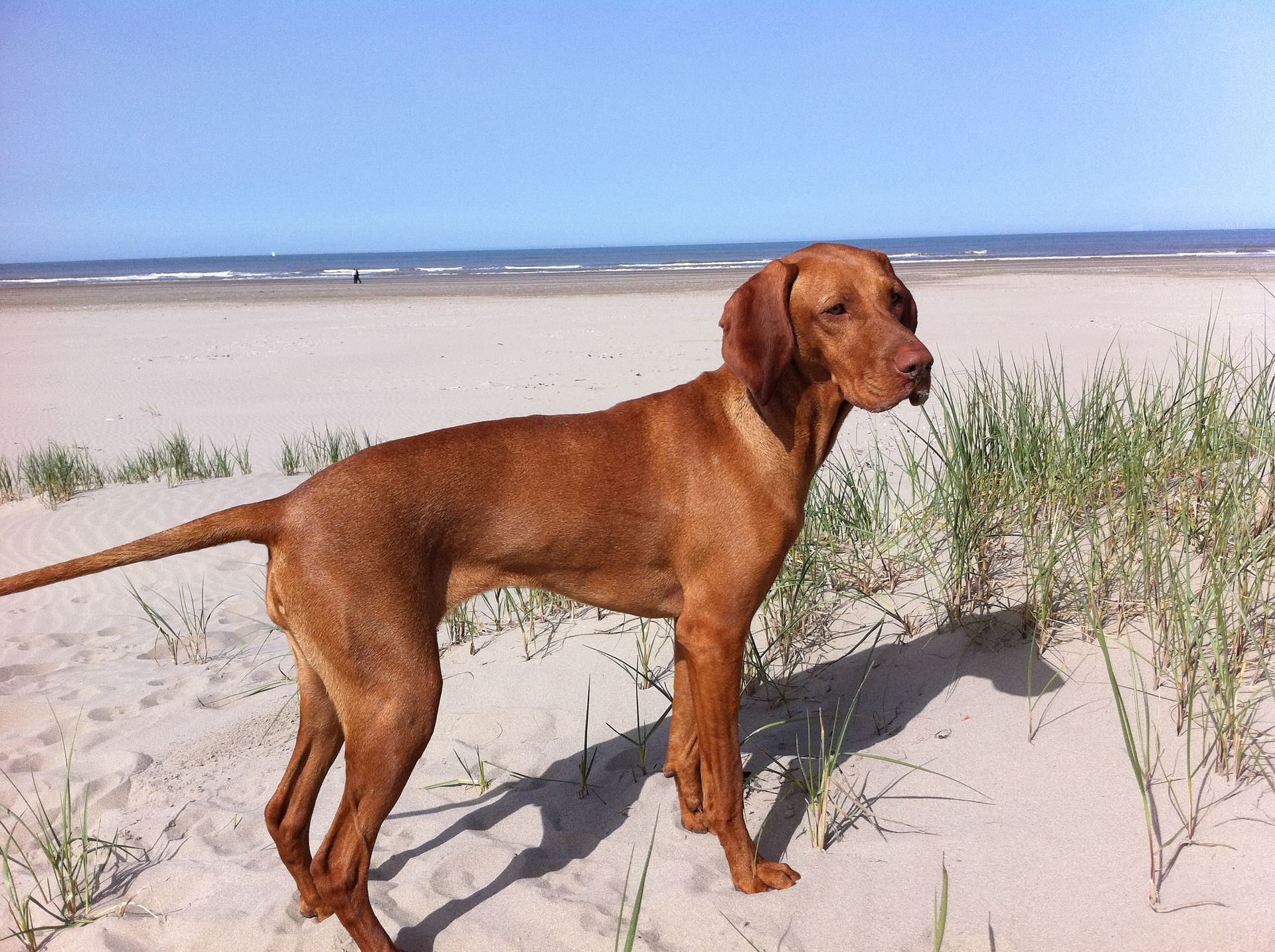 The Vizsla aka the Hungarian Pointer is a prominent sporting dog used to hunt fowl and upland game. In the UK they’re one of the top 50 dog breeds! Check out this guide to learn all about the National Dog of Hungary!

Vizsla Exercise: Over 2 hours per day

The Vizsla temperament is loyal, energetic, affectionate, gentle and lively. The breed is very intelligent and makes a fantastic family pet. Known as the ‘velcro dog’, the Vizsla is famous for prying attention from its owners! But this can make them prone to separation anxiety.

These hunting dogs are eager to please and easy to train in the right hands. They are at their happiest when working, so companion dogs will need lots of mental stimulation to prevent boredom.

Hungarian Vizslas are typically friendly towards strangers but may bark if they feel their space is being invaded. This makes them a great watchdog. Focus on socialization during the Vizslas early years to build on their confidence.

High in energy, the Vizsla makes an excellent playmate for older children. They’re a little too boisterous for smaller children and could accidentally knock them over. Vizslas form a deep bond with each member of their household, including the little ones!

Social and friendly, the Vizsla loves playing around with other canines at the dog park. Socialization is needed to prevent fear or timidness. A Vizsla puppy can be raised alongside cats but other smaller animals will be viewed as prey.

Check out the pros and cons of the Hungarian Vizsla dog below.

The Hungarian Vizsla is a medium-sized breed reaching its full size at around 6-8 months. They only have one coat colour but it comes in a few different shades. These are Golden, Red, Golden, and Golden Rust. They have a short single coat and a robust, athletic build.

The Hungarian Vizsla dog is estimated to date back to the 9th century. The first written recording of the breed was written by the Carmelite Friars in 1357 by order of King Louis I of Hungary. Their ancestors are thought to be the Transylvanian Hound and the extinct Turkish Yellow dog.

Over a thousand years ago similar-looking canines were featured in prints produced by the Magyar tribes. The Magyars left the Russian Steppes to travel Europe crossing their dogs with local canines. Their goal was to produce an effective skilled hunting dog.

The Finno-Ugric tribe eventually settled in Hungary. They often travelled on horseback and would attack other tribes, destroying villages and killing those in their way. The Magyar tribe needed a tough dog that could keep up with their horses, marking the beginning of the Vizsla’s creation.

Over time, the Vizsla grew in popularity. Warlords and Hungarian nobles took interest in the breed. They were responsible for the Vizsla’s development creating the modern breed we know today. The Hungarian name Vizsla translates to ‘pointer’.

In 1950 the first Vizsla arrived in America through a rather unconventional method. The dog, Sari and her two Vizsla puppies were smuggled from Communist Hungary with the assistance of a US State employee!

During the 20th century, thousands of people across Hungary owned a Vizsla. They continued to grow in popularity and were eventually made the National Dog of Hungary. In the UK alone there are over 4,000 Vizsla puppy registrations each year!

It’s common practice to dock the tail of a Vizsla. Whilst this practice is banned in the UK, there are some exceptions in England and Wales. Some hunting, retriever, and pointer dogs may be eligible for tail docking including the Vizsla.

A Hungarian Pointer is high in energy and will need more than two hours of daily exercise. An hour of this should be vigorous. They make great running partners and are perfect companions for out-going and active owners.

The breed has a great sense of smell but they may wander off! Keep them leashed or exercise the Vizsla in an enclosed space. It’s no surprise that these versatile sporting dogs are great dog sports competitors. They excel in agility, rally, obedience, lure coursing, and tracking.

Mental stimulation is essential for a Vizsla. This intelligent breed is destructive when bored so they need to keep their minds ticking over. Swimming, interactive games, sports, puzzles, and even just a sniff around can mentally stimulate a Vizsla.

On the grooming side, Vizlas are pretty low maintenance. A brush once a week to remove dead fur is all they need. Their short coat is protected by their natural oils so they stay rather clean. Baths should only be given when the dirt is visible.

The Vizsla’s long ears prevent air from reaching the canal. This makes them prone to ear infections, so they’ll need a weekly clean. Nails should be trimmed fortnightly, although these may file naturally when out and about. Vets recommend teeth are brushed daily.

Below are the breed-related health conditions of the Hungarian Vizsla dog breed.

Entropion: When the eyelid rolls inwards the lashes scratch the eyeball. This may cause pain, perforations, or ulcers. Sometimes pigmentation develops which could interfere with vision.

Hip Dysplasia: The socket and ball of the hip joint don’t fit together properly so they rub and grind against each other. It will cause lameness, inflammation, pain, and arthritis.

Epilepsy: This common neurological condition causes uncontrolled seizures in dogs. Fits are sudden and will stop on their own.

Hyperuricosuria: This health issue causes high levels of uric acid in a dogs urine thus developing stones in their bladder or kidney.

Cancers: Some cancers have been seen in the Vizsla. These are Mast Cell Tumors, Lymphoma, and Hemangiosarcoma.

Hungarian Vizslas are eager to please their owners thus making them somewhat easy to train. They’re intelligent and will pick up on commands quickly. Untrained Vizslas are incredibly difficult to handle and some owners have simply given up on the dog altogether.

Throughout life, socialization is key to preventing fear, timidness, and anxious behaviour. These canines are sensitive and won’t respond well to harsh tones or training methods. Positive reinforcement is the best way to get a Vizsla to listen.

Physical exercise and training go hand in hand. Trying to get a Vizsla to concentrate with pent up energy is near enough impossible! A lack of activity will lead to destructive behaviours. They’re prone to separation anxiety so training is needed before they can be left alone.

Vizslas are also retrievers so they nip and chew more than other breeds. Always have some toys to hand so they won’t chew the furniture or any prized possessions! Owners will need to dedicate a significant amount of time to create the gentle-mannered Vizla!

It’s important to channel this dogs energy! Vizslas love working so give them some tasks! These dogs aren’t called Velcro Vizslas for no reason! Set a daily routine so the Vizsla knows what to expect with their day.

To train a Vizsla to hunt they’ll need to get used to the sounds of gunshots. Allow them to play with prey, dragging it along the floor so they follow the scent. Now progress onto playing hide and seek with the game. Continue practising this and increase the difficulty.

Recommended: Do you know the Pyrenean Mastiff? Learn about him here!