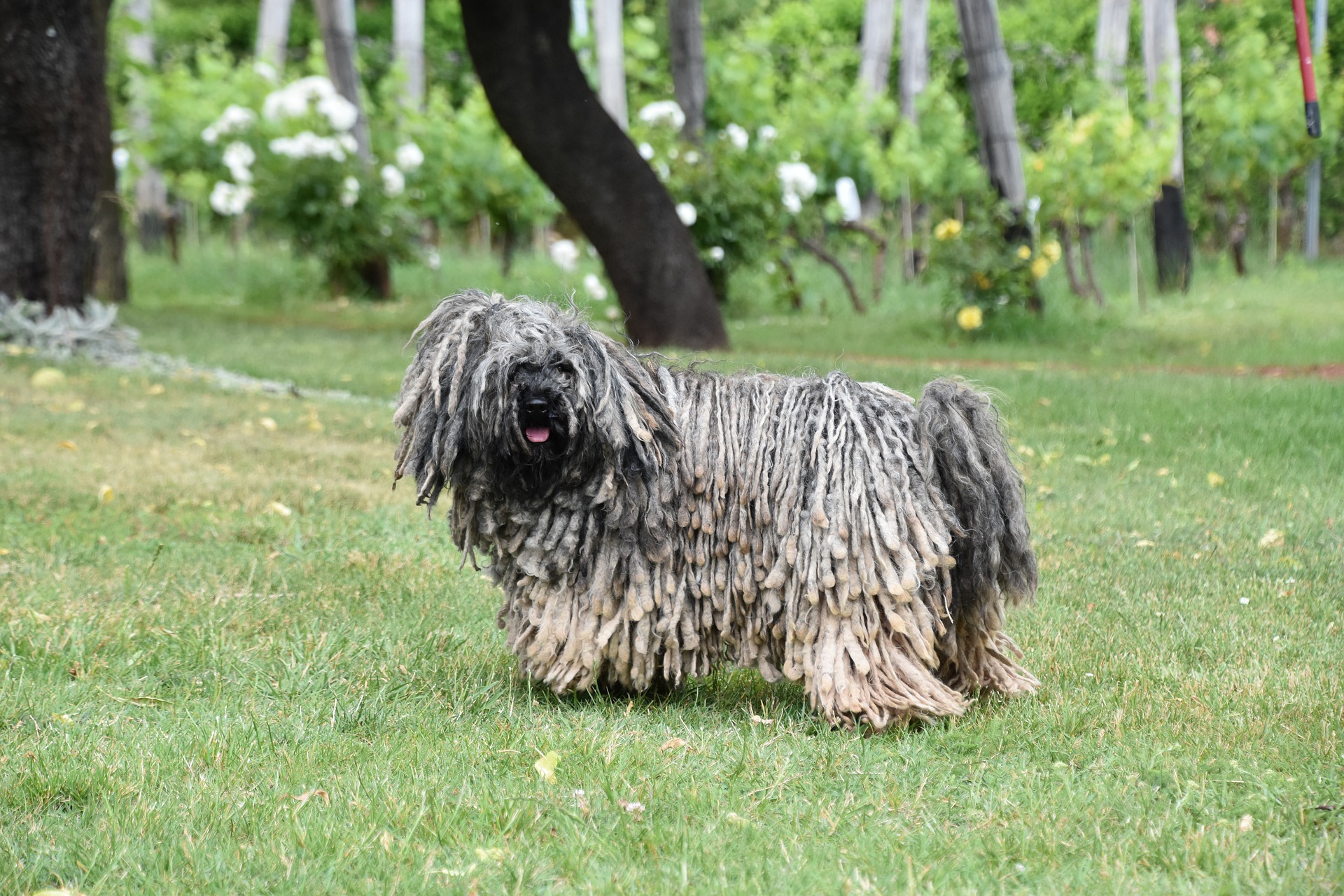 The Hungarian Puli is distinguished by its unique mop-like coat. This ancient breed has been herding for centuries. Today we’re going to take a look into this peculiar canine!

Hungarian Puli Exercise: Up to 1 hour per day

The Hungarian Puli are loyal, obedient, agile, and intelligent dogs. For centuries they’ve herded livestock and were prized sheepdogs across Hungary. He can be a little mischievous and stubborn so firm leadership is required.

Puppy like behaviour should be expected for the first two to three years of a Puli’s life. These herding dogs like to bark and need lots of socialization. At times this loving breed can be a little sensitive. But they’re independent so can be left alone on occasion.

Wary of strangers but never shy, the Hungarian Puli is protective of their family and territory. These tough dogs are excellent guard and watchdogs. They aren’t usually aggressive but will growl as a warning if they sense a threat.

If raised together, Pulik can be great playmates for children. As a herding breed, they may display these behaviours towards younger children. For instance a gentle pull by the nappy. They’re lively and energetic so may unintentionally knock over a small child.

Find out the positives and negatives of the Hungarian Puli below.

The Hungarian Puli is a small to medium-sized breed. Their coat colours can be found in Cream, Black, White, Silver, Brindle, and Brown. It features tight curls that sometimes resemble dreadlocks or even a mop! The Puli’s appearance is similar to the larger Komondor.

Recommended: Take a look at one of Britain’s Vulnerable Native Breeds today!

Hungarian Puli dogs originated during the 9th century. They were brought over by the Magyars during their westward invasions. The same nomads who brought the Vizsla to Europe. Although some believe the breed dates as far back as 4500 B.C.

Pulik are sheepdogs and have been herding across the plains of Hungary ever since their arrival. They would often work alongside the Komondor, a slightly larger Hungarian breed. The Pulik would herd and guard the livestock during the day while the Komondor would take over at night.

The breed is a descendent of the Poodle and potentially ancient Hungarian Sheepdogs. The Puli has a long corded coat designed to protect them from attacks and the harsh Hungarian winters. Shepherds were willing to pay an entire years salary for a Puli!

During World War II the Hungarian Puli saw its breed numbers diminish. Nazi soldiers were slaughtering the farm dogs. Breeders had to work hard to try and restore their numbers. The first Pulik came to the United States during the 1930s.

Today the breed is still used as an active working dog although this is rare. In the UK Pulik are fairly rare, so potential owners will need to join a waiting list for a Hungarian Puli puppy. But they are still seen participating in dog events across the country.

Pulik need up to one hour of exercise each day at a minimum. Many Pulik can happily spend much longer frolicking outdoors! These canines have a high drive and need some form of vigorous activity each day. Avoid overexercising Hungarian Puli puppies.

Some Pulik enjoy swimming. If he does enter the water, the dog should not be left unsupervised. The boisterous Hungarian Puli also requires mental stimulation. They love participating in dog sports and perform well in rally, herding, obedience and agility. A lack of activity and stimulation will cause the Puli to display destructive behaviours.

It’s no surprise that this breed requires lots of grooming maintenance, but it’s not as bad as it may seem. Between 8-10 months of age, owners won’t need to do much to the coat. Once the undercoat begins to form, tease the soft fur from the skin, pulling it apart with your fingers.

These are the beginning of the cords. Repeat the process over a period of 9 months until the Puli develops its cords. Look through and separate them each day to remove dirt and tangles. It’ll help keep the coat in better shape. Baths should be given every 6-8 weeks.

A Puli puppy won’t need as frequent bathing. Once the cords become overgrown they can be trimmed by around 4-6 inches. Clean the ears on a weekly basis and teeth brushed daily. Nails will need a fortnightly trim.

Below are the breed-related health conditions seen in the Hungarian Puli.

Degenerative Myelopathy: A progressive disease affecting the spinal cord typically affecting dogs above the age of 8 years old. It isn’t painful but will eventually lead to paralysis.

Bardet Biedl Syndrome: This inherited recessive condition has been found in the Puli. Over time vision loss will occur due to the deterioration of the photoreceptor cells within the retina.

Multifocal Retinal Dysplasia: An inherited condition causing the tissue of the retina to form clumps and folds. The dog’s vision can be seriously affected.

Cataracts: An abnormal cloudiness appears when the dog’s eye changes its lens. It’s called cataracts. If the opacity is large, it can cause vision loss.

The Hungarian Puli is intelligent which makes training that little bit easier. But they can be dominant and sensitive. Owners will need to learn how to balance firm leadership without issuing harsh corrections.

These headstrong dogs won’t hesitate to push the boundaries. Training should start as early as possible. An adult Puli is incredibly difficult to train. Because of their herding history, Pulik are independent and like to do things their own way!

Socialization should be regular throughout a Puli’s life. This breed does not like repetition and training sessions should last around 15 minutes maximum. The Puli enjoys obedience training, pleasing their owner by showing off their intelligence. Don’t forget to praise and reward all their good behaviours!

This active breed is easily distractable if they have pent up energy. Always walk the dog before getting them to focus. Owners are encouraged to enter their dogs into performance events. Pulik still have the desire to work and will greatly benefit from dog sports.

Some Hungarian Puli owners have sourced help from dog trainers. It’s important to source a professional that is experienced with herding breeds. Puppy classes are a great way to socialize a Puli whilst learning new commands.