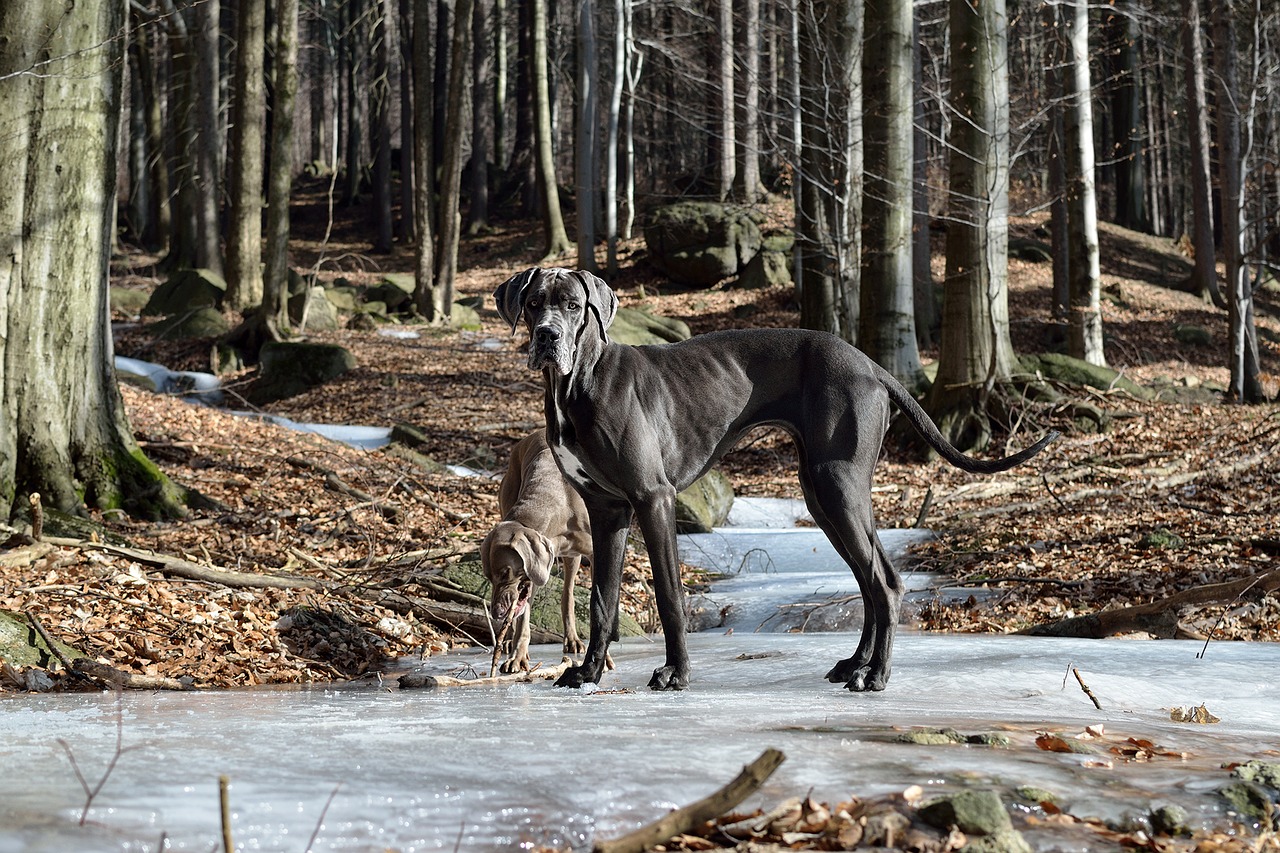 Great Danes are widely regarded as the largest dog breed in the world. They’re quite literally the size of a small horse! But don’t let their size put you off this remarkable breed. Great Danes are friendly giants!

Great Danes are bubbly characters and make affectionate companions. Despite their huge size, Great Dane dogs are gentle and will play nicely with both adults and children. But they will protect their family if they feel it’s necessary.

As a natural watchdog, the Great Dane won’t hesitate to bark at an intruder. At first, they will be aloof, possibly standoffish with strangers. Their intimidating size and bark are normally enough to ward off unwanted visitors. Great Danes aren’t typically guard dogs but can undergo protection training.

A Great Dane puppy should grow up with children in the home. Whilst they are relatively gentle, their big size could accidentally knock over smaller children. They are well-natured, gentle and sweet. Provided they have the space they need, this breed can fit happily into family life.

It’s best for Great Dane puppies to be raised in households with other dogs and cats from an early age. Some Great Danes may show aggression and dominance, especially to dogs of the same sex. They need lots of socialization to prevent an out of control dog!

Check out the positive and negative characteristics of the Great Dane below.

This giant breed has a single coat that’s short and smooth. They’re relatively easy to groom but will shed moderately. Their coat colours can be found in brindle, black, fawn, mantle, blue, and harlequin.

The Great Dane dog originates from Germany and dates back to over 400 years ago. They were typically owned by German nobility and would protect their country estates. Great Danes were originally bred for hunting wild boar

Hybrids of Irish Wolfhounds and English Mastiffs were exported from England to Europe around the 16th century. They were called the ‘Englische Dogge’. In 1878 the name of these hybrids was changed and replaced with ‘Deutsche Dogge’. It stands for German mastiff.

Many countries, however, have not adopted the new name. The name Great Dane came about after French Naturalist Georges-Louis Leclerc, Comte de Buffon saw the breed and named them ‘Grand Danois’. Despite the name Dane, this breed is not from Denmark. In Italy Great Danes are called Alano.

Great Danes are renowned for their cropped ears. In the past, they’d hunt Wild Boar. To prevent their ears from being mutilated, owners would crop them. Great Dane puppies would have their ears cropped between 7-10 weeks of age. Under Section 5 of the Animal Welfare Act 2006, ear cropping is listed as illegal in England and Wales.

This breed is described as the ‘Apollo of dogs’. The Great Dane temperament is much calmer than their ancestors. During their development, breeders set out to create a calmer version of the canine for family and home environments. In 1883 the first Great Dane breed club was established in the UK.

Great Dane exercise needs are high. Owners will need to dedicate more than two hours a day to outdoors time. A lack of activity will lead to destructive behaviour and those large jaws will quickly destroy any home!

Don’t overexercise Great Dane puppies as it could damage their fast-growing joints. Ideally, this breed should have access to a large home and garden. Make sure the fencing is secure so they can’t escape! Great Danes need to let off steam every once in a while.

An adult Great Dane could do less exercise but will still need more than one hour a day. These intelligent canines also require mental stimulation to prevent boredom. Even a game of hide and seek with food can be a great way to get their minds ticking over!

Great Danes are moderate shedders but this will increase during the spring and autumn months. Brush through their fur with a rubber brush weekly to keep their coat and skin healthy.

Baths should be given every 6-8 weeks. Whilst a Great Dane has low grooming needs, baths can be a challenge due to their size. It may be easier to wash them outdoors but only if the weather permits! Air drying is fine but a blow dryer will speed up the process.

There are a variety of Great Dane health issues that potential owners should be aware of. Below are the health conditions that have been noticed more frequently in the breed.

Gastric Dilatation Volvulus: The AKC reports GDV to be the number one killer in Great Danes. These large, deep-chested breeds are perfect targets for GDV and Bloat. The stomach twists trapping gasses and food inside which often leads to death. Emergency veterinary attention is required.

Dilated Cardiomyopathy: This disease affects the cardiac muscle thus reducing a dogs ability to create enough pressure to pump blood around the body. The condition is typically fatal and may progress quicker in some breeds more than others.

Hip Dysplasia: The hip joint develops poorly causing the ball and socket to rub against one another. It will lead to pain, inflammation, lameness, and eventually arthritis.

Hypothyroidism: An abnormal thyroid gland will affect a dog’s metabolic state. Symptoms include hair loss, thin and dull coat, weight gain, low energy and a lack of tolerance to the cold.

Wobbler Syndrome: Dogs with Wobbler Syndrome will take shorter steps and have a wobbly gait. It affects the spinal cord in the neck which is under some form of compression.

Entropion/Ectropion: The eyelid turns inwards causing the lashes to rub against the cornea. This will cause pain, ulcers and possible cornea pigmentation which could affect the dog’s sight. Ectropion is when the eyelid turns outwards exposing the inner tissues resulting in dryness.

Cherry Eye: This condition is common in Great Danes, Pugs, Beagles and French Bulldogs. The tear gland becomes inflamed resulting in a red mass popping out. It isn’t painful but will be uncomfortable.

Glaucoma: A build-up of fluid will cause an increase of pressure in the eye. It will lead to severe pain and eventual loss of vision.

It’s especially important Great Danes are adequately socialized. A dog this size can be a total menace if they lack socialization. Training should start as soon as you bring your Great Dane puppy through the door.

The Great Dane intelligence level is average. So housebreaking should take around two weeks to perfect if this is done correctly. Great Danes can be crate trained provided the crate is big enough to accommodate them.

This breed is relatively easy to train if they’re in the right hands. Respect training is most important. Great Danes will push the boundaries so a strong leader is required. They may be a little destructive in their younger years so it’s important to be firm but not harsh.

Great Danes are known to chew, nip, and herd a little more than other breeds. This can quickly spiral out of hand if these behaviours aren’t corrected. Time outs, removing toys, and ignoring them are some ways to discipline your Great Dane.

A lack of exercise can hinder training and will leave a Great Dane with pent up energy. They will find other mischievous ways to tackle their boredom. Great Danes require a great deal of care and attention to raise them into the well-natured Gentle Giants we know and love.