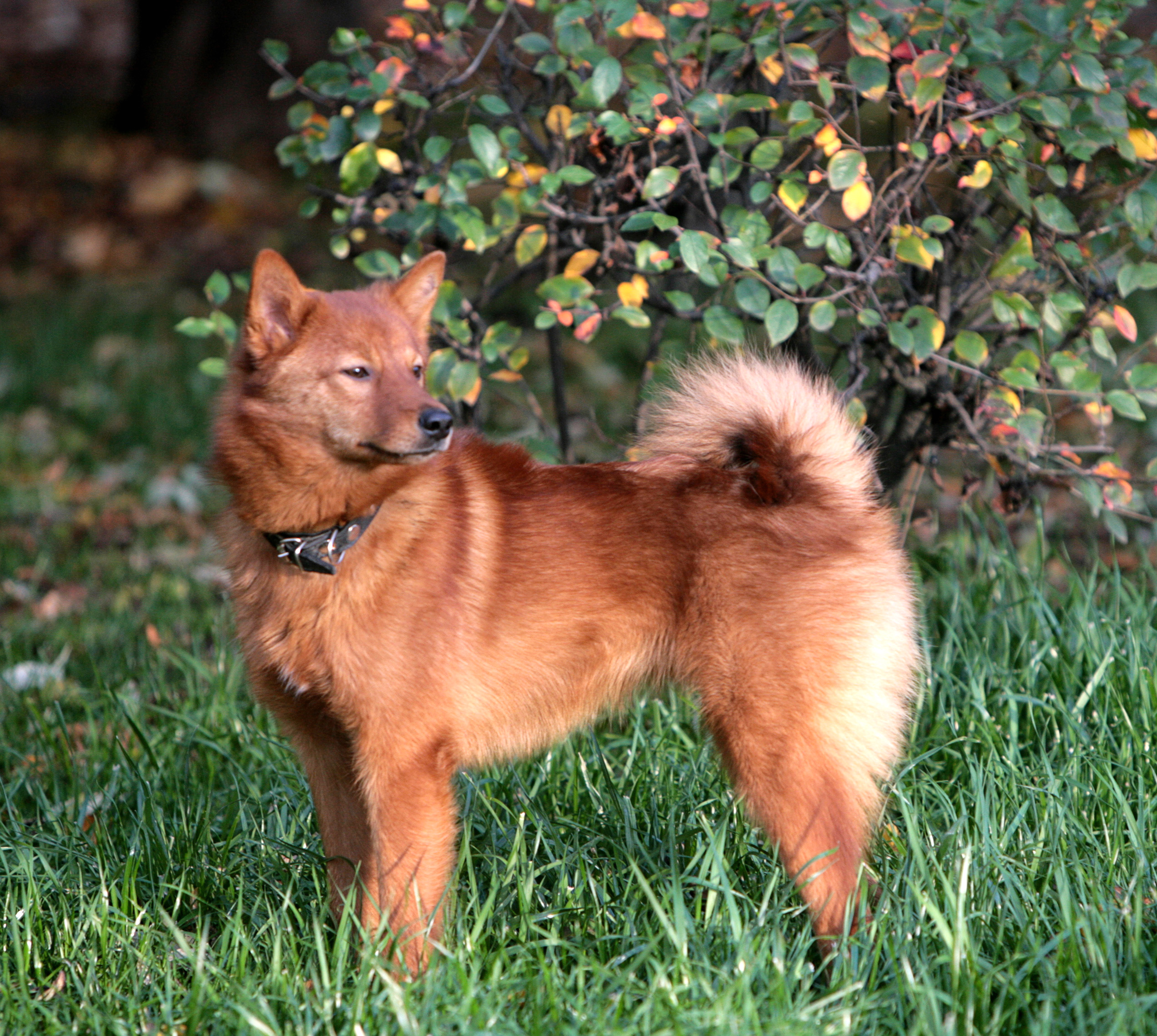 The National Dog of Finland is a prized hunting dog with a fox-like appearance! Let’s take a look into this breed’s health, personality, history, health needs and more!

A Nordic breed hailing from the Land of the Thousand Lakes, the Finnish Spitz is prized for its hunting abilities. Popular in its native land this canine is well suited to family life although their barking is a little bit of a downfall! The Finnish Spitz somewhat resembles a fox with its golden red coats and pointy ears.

Check out the pros and cons of the Finnish Spitz below:

The Finnish Hunting dog is a Spitz breed featuring pointy ears, a thick double coat, and a curly tail. Its breed standard has been revised 6 times! Finnish Spitz can grow dewclaws on their back paws so it’s recommended these are removed. Their coat colours are found in Gold, Red, and Golden Red.

Recommended: What is the history of the Glen of Imaal Terrier?

The Finnish Spitz is a happy, intelligent, vocal, playful and independent canine. The breed is highly affectionate and deeply loyal, building strong bonds with its owner/s. A Finnish Spitz is vocal and will bark when they deem necessary. It should come as no surprise as in Finland this dog is heavily praised for its barking..

Determined first-time owners are suitable for this breed. On occasion, they can be strong-willed yet despite this the Finnish Spitz is a sensitive dog and will develop separation anxiety if left alone regularly. The Nordic breed is spirited, friendly and a great companion.

Alert and a natural watchdog, the Finnish Spitz will immediately inform their owners of trespassers. At first, they’ll react cautiously to strangers. This should never result in aggression unless a dog is unsocialized. After holding themselves back so they can assess the situation, they should settle down around visitors and may even show their friendly side.

Finnish Spitz are excellent with children and make great playmates. They’re lively and active which is a great combination for children. Their size is also ideal and less likely to cause accidental injuries. Loving and loyal this canine will be a child’s forever friend.

In the past, the Finnish Spitz would work in packs. So they’re sociable and friendly with other dogs and can live happily alongside them. Due to their strong prey drive, they may view smaller household pets as prey. Felines should be raised with this breed from puppyhood.

The Finnish Spitz originates from Finland where it’s known in its native land as Suomenpystykorva. It’s believed the breed came to Finland after migrating from central Russia over 3000 years ago. They were vital to their human companions sourcing food with their excellent hunting abilities.

Their typical prey included small game squirrels and grouse although they were known to assist in hunting and tracking Elk, Moose and Bear. Over time, this breed adapted to hunting birds. Once they’ve spotted their prey, the Finnish Spitz will slowly wag their tails whilst simultaneously barking.

By moving their tails, hunters are able to find their dogs in the thick forest. Finnish Spitz also adapted to flushing and trailing gamebirds. During the late 1800s transportation improved across the world. This led to an influx of cross-breeding amongst the Finnish Spitz which almost led to its extinction.

Thankfully, two men from Helsinki, Hugo Sanderburg and Hugo Roos helped revive the breed from its near demise. By the beginning of the 1900s, the Finnish Kennel Club officially recognized the Finnish Spitz. They’ve been known as the National Dog of Finland since 1979.

In the 1920s the first Finnish Spitz arrived in England imported by Lady Kitty Ritson. She nicknamed the breed Finkie a term still used today. It wasn’t until 1959 when the first of the breed arrived in America from England. The breed is still relatively rare in the UK with only 5 Finnish Spitz puppies being registered with the Kennel Club in 2020.

A Finnish Spitz should receive up to one hour of exercise per day. Some of this must include vigorous play once they reach 3 years old. They enjoy interactive games with their families such as fetch and frisbee. It’s important not to over-exercise a Finnish Spitz puppy. Well-socialized dogs will enjoy playing with other canines at the park.

This breed is a great competitor in dog sports and does well in agility, lure coursing, and obedience. It’s also a good form of mental stimulation for this highly intelligent dog. Finnish Spitz have low boredom thresholds and will resort to destructive behaviour if their needs aren’t being met.

As hunting dogs, these canines will chase after prey. They also have a high wanderlust potential so may walk off on an exploration. Always keep them leashed unless in an enclosed space. Garden fences should also be secure. The Finnish Spitz isn’t suited to apartments.

To keep the coat in good condition brush it through weekly. It should never be trimmed. As a double-coated breed, the Finnish Spitz dog will shed moderately throughout the year. Shedding will increase in the autumn and spring. A pin brush, slicker brush and comb are ideal tools to use on their coat. Lightly spray the coat with water before brushing.

The Finnish Spitz is typically a clean dog and won’t require frequent bathing. Pop them in the bath once they begin to get dirty or smell. Brush through the coat before getting it wet. Give the nails a trim every fortnight. Clean the ears weekly to remove any debris. For good dental hygiene brush the teeth daily.

The Finnish Spitz is generally a healthy dog but there are a few breed-related health conditions to be aware of:

Luxating Patellas: The kneecap moves out of position temporarily before moving back into place just as quick. Affected canines will run on three legs before returning to four.
Hip Dysplasia: Due to the abnormal growth of the hip joint, the ball and socket of the hip won’t fit together correctly. This will cause symptoms of lameness, pain, inflammation and eventually arthritis.
Elbow Dysplasia: The elbow joint grows abnormally resulting in pain, inflammation, swelling and eventual arthritis.
Epilepsy: A common neurological condition causing unprovoked seizures in affected dogs.

The Finnish Spitz can be a handful to train but determined first-time owners will prevail! This breed is sensitive and will withdraw from harsh training techniques. Use positive methods, rewarding every good behaviour. Whilst the Finnish Spitz is strong-willed they’re also intelligent and will pick up on commands quickly.

Finnish Spitz puppies have low boredom thresholds so make training fun! Keep the sessions short to around ten minutes and if they begin to show disinterest, divert their attention to something new. Remember, these dogs will pick up good commands just as quickly as bad habits!

Respect training is most important. Once authority has been established obedience will begin to follow. Training must begin as soon as the Finnish Spitz puppy arrives in its new home. They must be taught boundaries they aren’t allowed to break. Get them into a routine that includes regular toilet breaks.

Socialization is important to grow the Finnish Spitz into a well-rounded dog. Group puppy classes are a good way to meet new people and dogs whilst learning new commands. It’s important to introduce a puppy to a variety of sights, sounds, and places to prevent fear or anxiety.

Recommended: Check out the story of Staffy & Stray Rescue here!