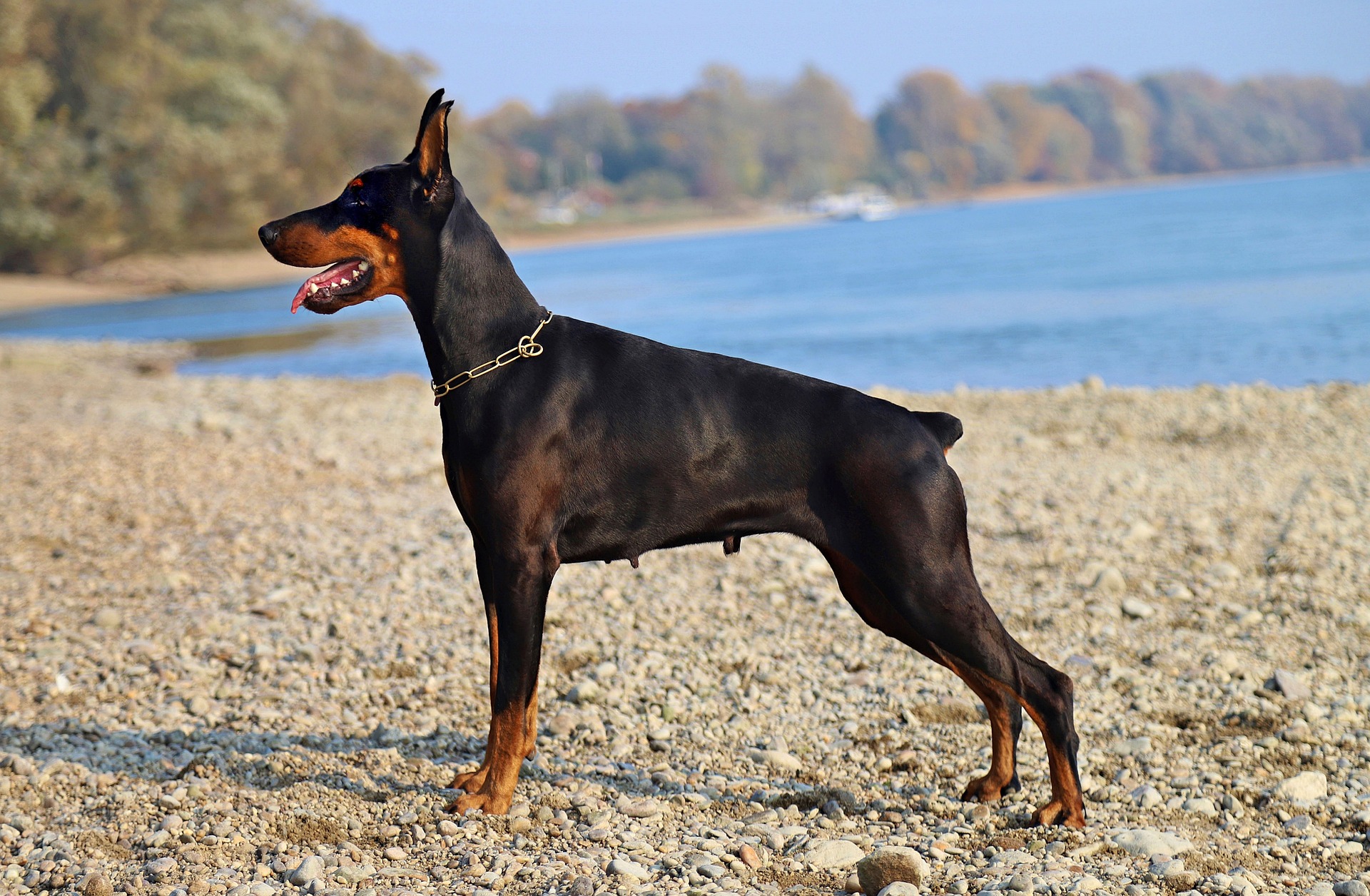 The Tax Collector’s Dog has a very interesting history. Despite being a relatively new breed, Dobermanns have quickly become a firm favourite in the dog world. Check out our guide below for an in-depth analysis of this breed.

The Doberman Pinscher is a demanding breed that requires a great deal of care. But the results are rewarding for those that give this dog the time, training and love they need. This breed is highly intelligent and is well-known for its work with security, military, and police.

Over the years, Dobermanns have built up a fearsome reputation, but that hasn’t stopped them from taking 18th place on the AKC breed rankings as of 2020. Their elegant appearance attracted many, with author Marguerite Henry describing the Dobermann as ‘the true aristocrat of dogdom.’

The Dobermann temperament is deeply loyal, protective, alert, fearless, and obedient. Although the breed is regularly stereotyped as aggressive, they actually have a gentle and loving personality. Compared to other breeds, Dobermanns will tolerate being left alone.

Given the right training, socialization, and exercise this breed will be even-tempered. Studies have shown the Dobermann is one of the most intelligent dog breeds. Experienced owners are recommended for this canine.

This watchdog is reserved with strangers and used to have their ears cropped to enhance their hearing ability! Dobermanns are great guard dogs and will protect their family against any threat. It’s important they’ve been well-socialized with strangers as they may become overly protective.

For this breed, older children are better suited. Doberman puppies are boisterous and could accidentally injure smaller children. Devoted to their family, this breed is affectionate, sweet and protective of the kids in their household. The energetic side of the Doberman personality makes them great playmates for kids.

Dobermanns are wary of other dogs and may interpret them as a threat. Early socialization is the key to developing healthy friendships with other canines. Well trained Dobermans will get along well with other dogs. Male Dobermanns have a natural instinct to assert their dominance over other males. This could spark a fight.

Take a look at the positive and negative Dobermann traits below:

The Doberman is a medium-large breed featuring a muscular, athletic build and a long, narrow head. Their coat colours as listed by the Kennel Club Breed Standards are found in Black & Rust, Blue & Rust, Brown & Rust, and Fawn & Rust. Colour Dilution Alopecia is commonly seen in blue and fawn coats. This can cause bald spots and a dull and thin coat.

The Doberman Pinscher originated from Germany in the 19th century. They were created by Karl Friederich Louis Dobermann, a dog breeder and tax collector from Apolda. His goal was to produce an intimidating protection dog that would assist him in his jobs.

It’s no surprise that tax collectors faced a large amount of hostility when on their rounds. During their initial creation, the Dobermann dog was prized for its ferociousness and aggression. But it’s also poised and trained to react upon command, a priceless trait.

After Karl Dobermann’s death, Otto Goeller created the National Dobermann Pinscher Club. He refined and perfected the breed during the 1890s. Soon after, their status as a working dog propelled and it didn’t take long for the police and military to notice the breed.

A number of breeds are thought to have contributed to the Dobermann’s creation. These include the Rottweiler, German Pinscher, Weimaraner, Greyhound, and the Manchester Terrier. The AKC also list the Black and Tan Terrier and the Old Shorthaired Shepherd as contributors.

By World War II the United States Marine Corps began using the Dobermann as their official war dog. They were used as sentries, messengers, search and rescue dogs and guard dogs. Their excellent sense of smell could also detect mines and enemy locations.

Nowadays modern breeders have reduced the heightened aggression that was once seen in the Doberman. Despite being under 150 years old, the breed has already won four Best in Show titles at the Westminster Kennel Club Dog Show in 1939, 1952, 1953, and 1989.

Dobermann dogs need an incredible amount of daily exercise. Owners will need to dedicate over two hours per day to their activity needs. They’ll resort to destructive behaviours if their exercise requirements aren’t being met.

Many owners don’t realize that mental stimulation is just as vital as exercise. Dog sports are one way of getting a dog’s mind ticking over. Interactive games, puzzles, hide and seek, toys, and even a sniff around the park are some ways to mentally stimulate a dog.

Doberman Pinschers are fairly low maintenance on the grooming scale. Their short coat sheds moderately and only needs a quick brush once a week. A rubber grooming glove will remove the dead fur whilst redistributing their natural oils.

Baths should be given every 6-8 weeks. Their short fur can air dry naturally. Due to their long floppy ears, bacteria and debris build up quicker. Clean the ears weekly to prevent infection. Nails need a trim fortnightly and vets request teeth are brushed daily.

Find out the breed-related health issues of the Dobermann Pinscher below:

Dobermanns require a firm owner that won’t let this dog push them around! In a family setting, this breed will be inclined to listen to the person that gives them the most attention. As an intelligent breed, training is relatively easy for those with experience.

Protective by instinct, Dobermanns will always be on the lookout for a threat. Owners will need to reassure their dog that not every person knocking on the door is trouble! A Dobermann can quickly spiral into overreactive behaviour due to a lack of socialization.

Dobermann puppies can be highly destructive in their early years. Owners will need to manage this behaviour by giving their dog enough toys and exercise to unleash their energy. A lack of exercise will lead to destructive behaviours.

Crate training is an effective method for a Dobermann puppy. It’s a separate space that feels both safe and comforting. It should be big enough to hold their bed and toys. This breed takes well to crates as they enjoy having a space of their own. To speed up housebreaking, crates may also be used!

Dobermans are impeccable guard dogs and should begin obedience training at 8 weeks old. These fiery canines aren’t for the faint-hearted and have even intimidated unprepared owners. Reward-based training works well with this breed and consistent owners will quickly earn their respect.