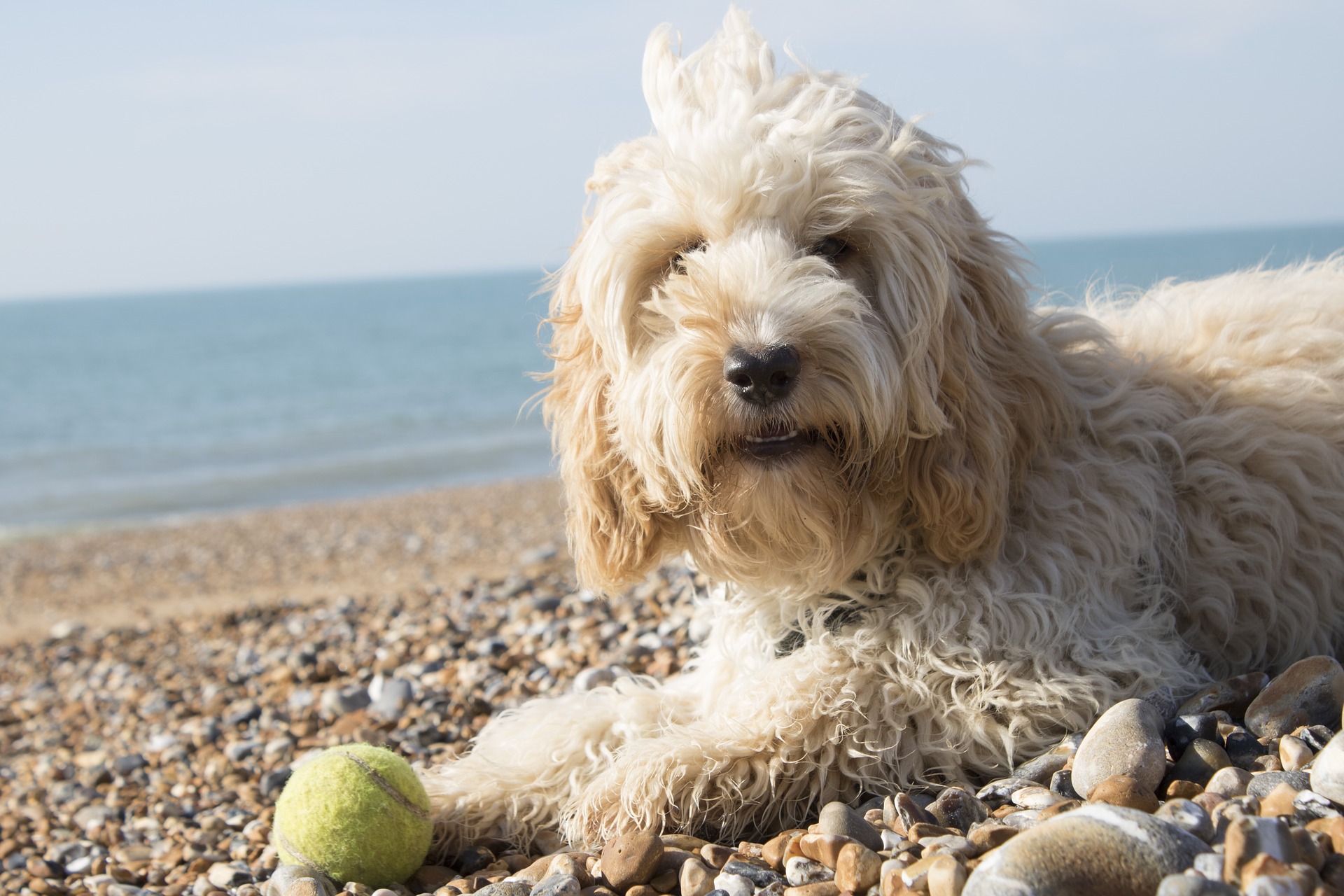 Britain’s most popular designer dog is the Cockapoo. Crossed between a Poodle and Cocker Spaniel, these dogs really are the best of both worlds! Take a look at our Cockapoo breed guide to learn all about the oldest hybrid!

Cockapoo Exercise: Up to 1 hour per day

Cockapoodle dogs are known to be even-tempered, sociable, affectionate, funny and just sweet all around! These outgoing, happy go lucky dogs will bring a smile to any face when they walk into the room.

Bred as a companion dog, the Cockapoo temperament is prone to separation anxiety. The breed thrives off attention from their owners and can’t bear to be left alone for long periods. Active and super cuddly, British dog owners have been purchasing Cockapoo puppies in their thousands each year!

As a vocal breed, Cockapoos can make good watchdogs but are hopeless at guarding. They’ll happily greet strangers showing their friendly side. Of course, this is all dependent on early socialization.

Cockapoos make excellent family dogs and get along great with children! The breed is suitable for homes with both younger and older . These dogs fit well into active families but can be a little boisterous. Keep an eye on young children during playtime.

Social and super friendly, the Cockerpoo is quick to befriend other dogs in the park. They just love clowning around with their doggy friends! Cockapoodles can live with other dogs and also cats but should be introduced during their puppyhood.

Take a look at the positives and negatives of the Cockapoo traits below.

The Cockapoo size can be found in Teacup, Toy, Miniature, and Standard varieties. Coat colours can be found in red, white, silver, merle, cream, brindle, chocolate, apricot, black, beige, sable, and blonde. Mixtures of two or three of these colours may also be seen. A Cockapoo full grown will reach a maximum height of 18 inches and weight of 11 kilos.

The Cockapoo originates from the United States and is the oldest of the hybrid types. They’ve been popular since their creation in the 1950s and have quickly won the hearts of dog enthusiasts worldwide.

This hybrid is a cross between an American Cocker Spaniel and Poodle. The miniature Cockapoo and toy Cockapoo is created by breeding the smaller Poodle varieties. English Cocker Spaniels may also be used as both are closely related.

Poodles are an ancient breed that was used to hunt waterfowl. They originate from Germany but were developed in France. The breed is available in four sizes, standard, medium, miniature, and toy. Poodles are the National Dog of France.

As a hybrid, the Cockapoo hasn’t been recognized by the AKC or KC, therefore is unable to compete in their competitions. Today UK Cockapoo breed enthusiasts have shown this canine isn’t just a cuddly companion. They make fantastic service dogs but are particularly popular as hearing dogs.

Cockapoo puppies are super energetic and love being outdoors, so should receive at least an hour and a half of exercise each day. As an intelligent breed, Cockapoodles will greatly benefit from mental stimulation.

The Cockapoo adult weight should be no higher than 11 kilograms. This breed is prone to weight gain so owners must keep up with their activity needs. Cockapoos love a good swim so take them to the water every once in a while.

As a hybrid, these dogs are unable to compete in official dog sports as they aren’t recognised by any Kennel Club. But there are special events created by Cockapoo clubs to encourage owners into dog sports. Agility, flyball, and obedience are categories the breed excels in.

Cockapoos have curly, low-shedding coats although some may take after their Spaniel side a little more. Brush them every 1-2 days to remove dead fur and prevent any knots and tangles. Combs, slicker brushes, and pin brushes will all work on their fur.

Regular baths can be damaging to the skin, so give the Cockapoo a wash every two months. Don’t brush fur when wet as this could cause tangles. To prevent matting, blowdry their coat.

The Cockapoos fluffy ears can be prone to ear infections due to a lack of airflow. Clean them weekly to remove any dirt and bacteria. Nails will need a trim every fortnight and teeth should be brushed at least 4 times a week.

As a cross-breed, Cockapoos are relatively healthy but they can still suffer from health issues. Check out some of the health conditions that could be seen in the Cockapoo dog breed below:

Luxating Patella: The kneecap will dislocate out of position temporarily before relocating back into place. Affected dogs may run on three legs before quickly returning back to four.

Progressive Retinal Atrophy: This degenerative disease targets the photoreceptor cells within the eye. The inherited disorder will lead to blindness.

Hip Dysplasia: Abnormal growth of the hip joint will cause dogs pain, swelling, inflammation, and lameness. Over time arthritis will eventually occur.

Glaucoma: Seen in their parent breed the Cocker Spaniel, this health issue is caused by a sudden increase of pressure in the eye. Redness and severe pain will be experienced followed by a loss of vision.

Cataracts: An abnormal opacity appears in the eye via a change of lens. This may interfere with vision if it’s big enough, which could lead to blindness.

Phosphofructokinase Deficiency: A metabolic disorder causing a deficiency in red blood cells and glucose which may result in anaemia.

As an intelligent breed, a Cockapoo puppy will pick up on commands quickly. They’re fairly easy to train and can be a good choice for first-time owners. Cockapoos are eager to please but won’t take harsh corrections well. Positive reinforcement is the best training method for the Spoodle!

Housebreaking can be a bit of a challenge for the Spoodle, especially when living in a flat. Owners must be consistent with their boundaries and teaching if they want their puppy to listen.

Crate training is a great way to prevent any accidents in the home. It’ll take time but the results are rewarding. Crates can also be used as a way to practice leaving the Cockapoo home alone. It’s a safe space, so the dog should feel comfortable and relaxed when on their own.

Cockerpoos are high in energy. Obedience training can be a massive help in getting these dogs to listen when all they want to do is play! Cockerpoodles are powered by motivation so include their favourite toy or food treat as a reward.

During puppyhood, this breed may be a little nippy. Immediately correct this behaviour when it happens. Show the dog it hurts by letting out a high pitched noise. Don’t move your hand as they may interpret this as a game. Now their attention should be diverted onto something else.