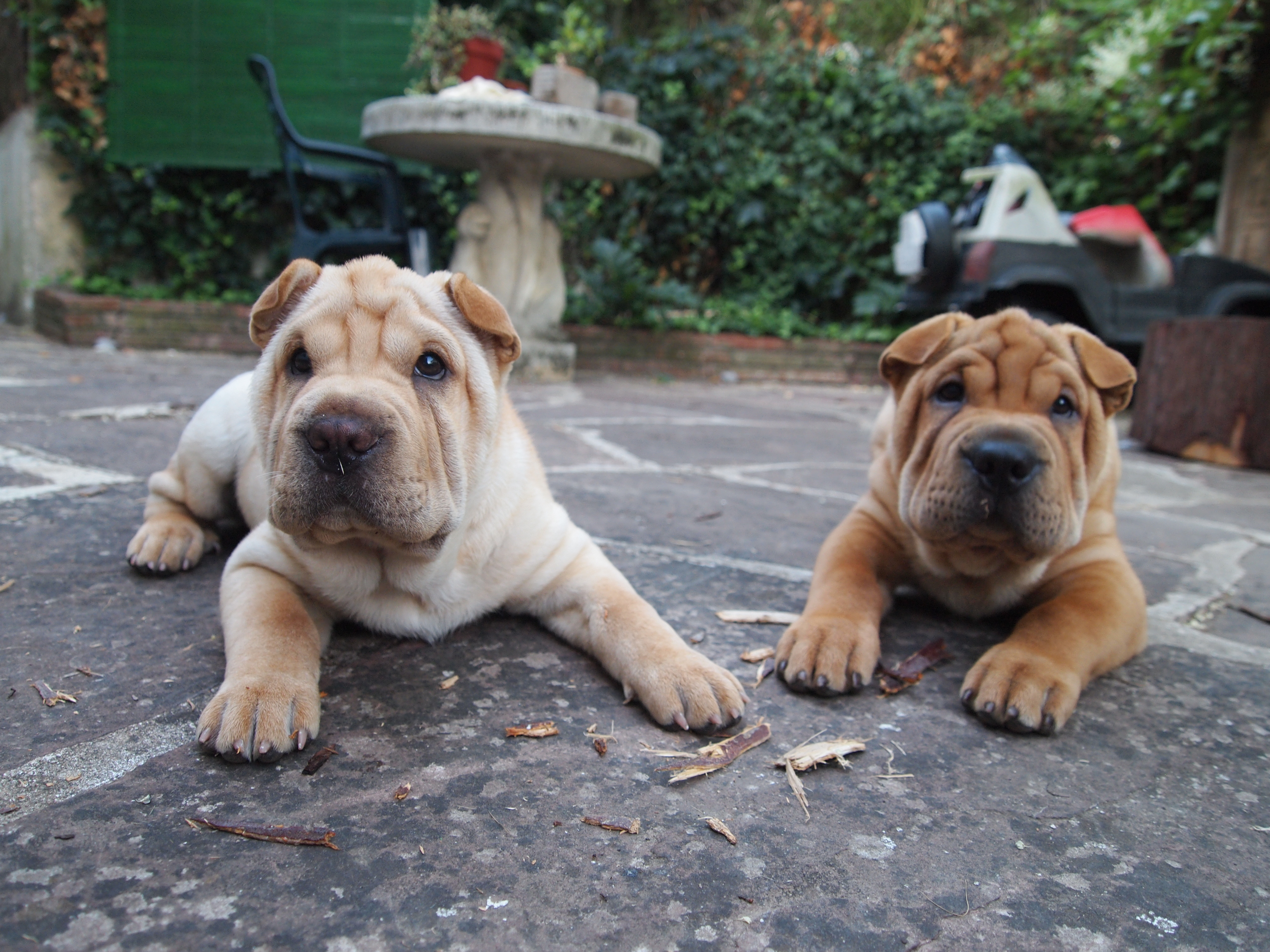 The Chinese Shar Pei dog is one of the worlds most renowned dog breeds. Check out the guide below as we delve into the background of this unique and interesting canine.

The Shar Pei is a Chinese dog breed widely recognised for its wrinkles. However, despite their looks, many are surprised to know the Shar Pei is closely related to the Spitz family. They share the same genetic group as the Chow Chow, Shiba Inu, and the Akita.

In Hong Kong the traditional, less wrinkly Shar Peis more common than the wrinkly version seen in the West. This breed is highly popular in the Western world although breed numbers have decreased in the UK over the last 10 years. In 2011 2,061 Shar Pei puppies were registered with the KC compared to 2020 at 714.

Check out the pros and cons of the Shar-Pei below:

The Chinese Shar-Pei is a medium-sized dog that’s renowned for its wrinkly skin. Shar Pei also have blueish black tongues a unique characteristic also seen in the Chow Chow. Folded ears and a dark muzzle are also unique features of the Shar-Pei. Their double-coat is found in all solid colours with the exception of White.

Recommended: Check out these on the go dog water bottles!

A Chinese Shar-Pei is protective and devoted to its family members. They’re calm, independent and affectionate dogs but on occasion can be stubborn. This breed isn’t the best choice for first-time owners as a lack of training and socialization will lead to aggressive behaviour.

Shar Pei have a strong prey drive so may chase smaller dogs and animals. As an independent breed, the Shar Pei can tolerate being left alone and isn’t prone to separation anxiety. That being said, no dog can be left alone continuously as this is likely to lead to destructive behaviour.

Shar-Pei are aloof and reserved around strangers. They prefer to keep their distance but Shar-Pei puppies must be thoroughly socialized with people to prevent territorial behaviour. The breed’s history plays a huge role in their natural suspicions of strangers and dogs today.

Introduce a Shar Pei to a family environment as a puppy. This breed is better suited to older children as they may nip and herd smaller children. It’s ill-advised to rehome an adult Shar Pei with children. This breed can tolerate kids and make loyal family pets.

A Shar Pei isn’t prized for being sociable! Due to its fighting background, unless well-socialized, the Shar Pei isn’t too dog friendly. They’re not the sort to walk into the dog park on the lookout for playmates! Cats and dogs living in the same home as a Shar Pei should be raised together from puppyhood.

The Shar-Pei originates from China with a history spanning over 2,000 years during the reign of the Han Dynasty. The breed was commonly owned by the working class as opposed to nobility. They’re versatile and were used for a range of jobs including hunting, herding, and guarding livestock.

At one time in the Shar Pei history, they were used as fighting dogs. The English even referred to them as the Chinese Fighting Dog. Their loose skin offered a form of protection against bites but the introduction of larger breeds saw them fall out of popularity in the fighting ring.

In 1949 the People’s Republic of China was formed and the Communist regime began slaughtering most of their purebred dog population. Back then and even today dog meat is still being consumed! This almost led to the extinction of the Shar-Pei. Thankfully a few specimens of the breed were saved in Taiwan and Hong Kong.

The Guinness Book of World Records listed the Chinese Shar-Pei as the world’s rarest breed in 1978. At that time there were approximately 60 Shar Peis left in the world! After a magazine feature, interest in the Shar-Pei skyrocketed across America.

This led to cross-breeding with the Bulldog, Bull Terrier and Pug being introduced into the bloodlines. Thus establishing the creation of the Meat-Mouth Shar-Pei. The traditional breed before crossing is referred to as the Bone-Mouth Shar-pei but less than 100 of this variety remain today.

Much to the dismay of breeders, some Shar-Pei enthusiasts have set out to create the Miniature Shar-Pei. Their small size is caused by a recessive gene however this variety is uncommon to come across. Blue Shar Pei or Grey Shar Pei have become one of the more popular coat colours for this breed.

A Shar Pei should receive up to one hour of exercise per day. These intelligent canines need lots of mental stimulation to prevent boredom! Whilst this breed does have a low wanderlust potential they should still be kept on leads due to their temperamental nature with other dogs.

This breed can live in an apartment provided their activity needs are being met. They’re adaptable dogs but enjoy active lifestyles. Dog sports are a good way to keep this breed physically and mentally fit. The Shar Pei excels in categories such as rally, obedience, agility and tracking.

Use a rubber or bristle brush to groom through the fur two to three times a week. The Shar-Pei is low shedding but will blow their coat during the spring and autumn season. It’s typically easy to maintain. To prevent overgrown nails trim them fortnightly.

The Shar Pei bear coat acts as a natural barrier, repelling dirt from its body. However, this breed should still receive a bath every 4 weeks. Ensure the shampoo is thoroughly washed off from under the wrinkles. Prevent dental disease by cleaning the teeth daily.

Recommended: What is a Labradoodle?

Find out the breed-related health conditions of the Shar Pei dog below:

Familial Shar Pei Fever: A hereditary condition causing fever, pain and swelling of the tibiotarsal (hock) joints. This auto-inflammatory disease only occurs in Shar-Pei and is estimated to affect 23% of the breed’s population.
Brachycephalic Obstructive Airway Syndrome: As a Brachycephalic breed the Shar Pei dog may suffer from breathing issues.
Skin Problems: The wrinkles of the Shar-Pei are prone to inflammation and infection. Atopy, an itchy skin condition caused by allergies is also seen in this breed.
Entropion: The eyelid rolls inwards resulting in the lashes scratching the surface of the eye. This will cause ulcers, irritation, possible pigmentation development, and excessive tearing.
Glaucoma: An abnormal cloudiness appears in the eye after a change of lens. If the opacity is big enough to affect vision it will stop light from reaching the retina, eventually causing blindness.
Amyloidosis: A condition causing the dog to abnormally deposit protein in the body, typically the liver or kidneys which could result in kidney failure.
Vitamin B12 Deficiency: Cobalamin Deficiency is seen more often in the Shar Pei than other breeds and it’s suspected to be hereditary.

Aggression isn’t uncommon amongst the Shar-Pei breed. It’s typically down to a lack of socialization and training. As an ex hunting and fighting breed, the Shar-Pei is naturally ready to defend its family. It’s important a Shar Pei puppy experiences a variety of new places, sounds, sights, people, and dogs.

Never let the Shar-Pei break the household boundaries. This alpha dog will quickly try to take the top spot. First and foremost, it’s important to build a bond with a Shar-Pei puppy. Once this is established obedience training should begin right away. Within the first week of their arrival.

Owners must be consistent and patient if they want to get anywhere with training. Positive reinforcement is always best. Use food rewards and toys as a form of praise. Instantly reward good behaviour just as quick as correcting bad. Keep training sessions to a maximum of 10 minutes and avoid repetition as this will bore the Shar Pei!

Group puppy classes are a fantastic way to socialize a dog whilst learning new commands. These dogs are smart so once they’ve grasped the basics, move on to some advanced training. Teach them new tricks even if it’s just for fun. It’s a good way to keep the Shar Pei occupied.