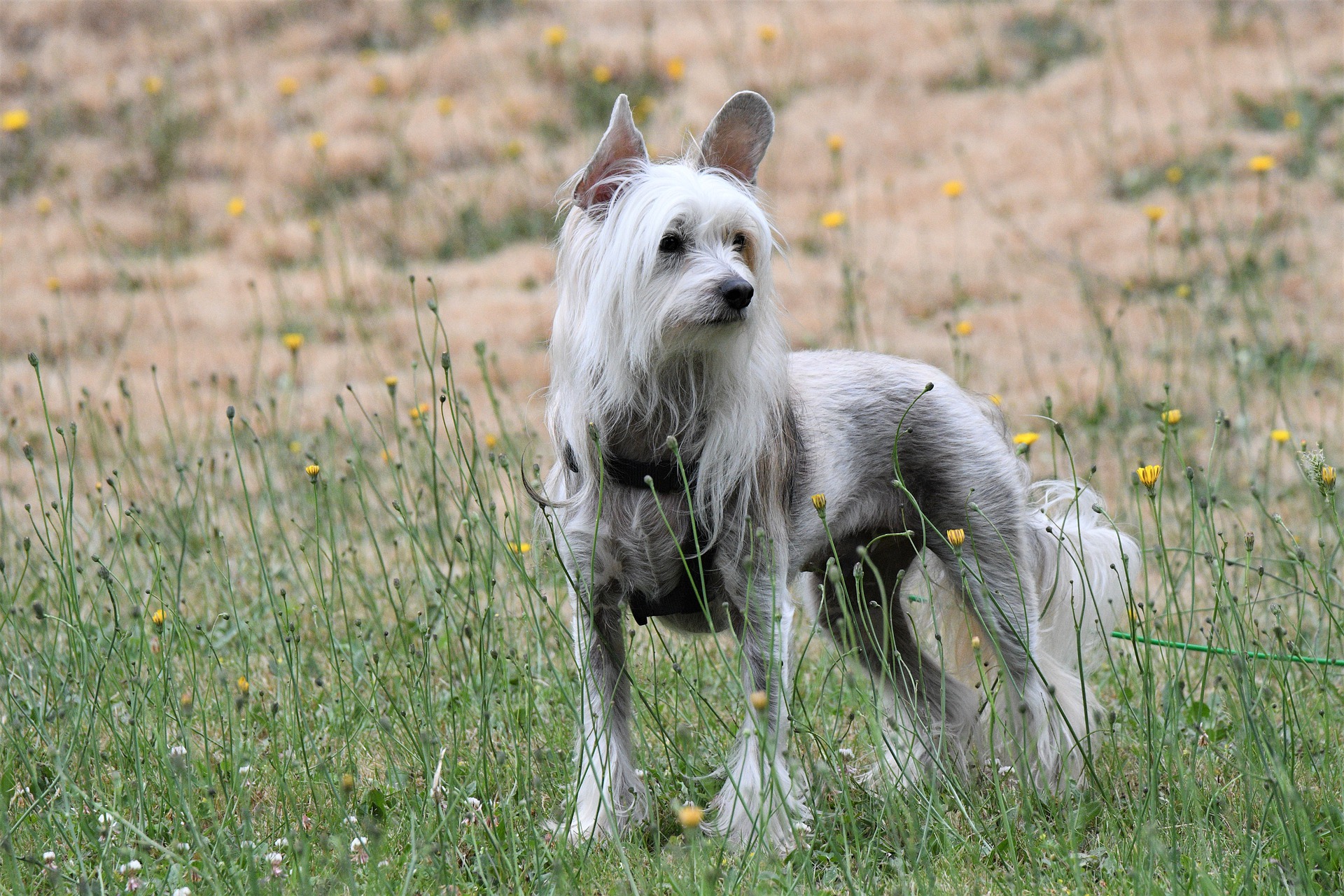 Chinese Crested Dog Exercise: Up to 30 minutes per day

Chinese Cresteds are sweet-tempered, happy, alert, affectionate, and playful. They bond strongly with their owners and are prone to separation anxiety. The breed is better suited to homes where at least one person of the household stays indoors.

Rarely aggressive, but on occasion stubborn, Chinese Cresteds are ok for first-time owners that have time for them. They may look sweet and delicate on the outside, but this canine can easily become the centre of attention in a busy room!

As a natural watchdog, Chinese Cresteds won’t be so trusting of strangers. Especially during a first meet. They’ll bark at a knock on the door and will need some time to get used to any unknown company. This toy breed will need lots of socialization to prevent fear.

When playing with other dogs, Cresteds can injure easily. Owners will need to keep a close eye on play. The breed gets along well with other dogs and can also live alongside cats. Socialization is key to preventing fear-based reactions.

Find out the positives and negatives of the Chinese Crested dog breed below.

The Chinese Crested dog is a toy-sized breed that comes in two varieties, the Powderpuff and the Hairless. They can be found in colours Black, Apricot, Tri-colour, Chocolate, Blue and Cream. Unlike the Powderpuff, hairless varieties have crooked, even missing teeth.

The Chinese Crested dog is an ancient breed so not much is known about the beginning of their existence. What we do know, is the modern dog we know today, originated from China. Here they were developed and reduced in size.

The breed shares the same genetic mutation as the Xoloitzcuintli so they could possibly share similar roots. Chinese Crested dogs sailed the high seas with their owners as early as 1530! Onboard they’d exterminate rats and became known as Chinese Ship Dogs.

They were sold at ports across the world in places such as South Africa, Turkey, and Egypt. European explorers have documented a similar looking breed when visiting port towns in Asia, Africa, and South America.

Debra Woods established Crest Haven Kennels in the 1950s where she bred and recorded her dog’s bloodlines. Gypsy Rose Lee a burlesque dancer also bred Chinese Crested dogs which were incorporated into the kennels upon her death.

Both women created the very foundation of every single Chinese Crested dog alive today! The Toy breed arrived in the UK during the early 1800s. They were eventually recognised by the Kennel Club in 1981, with the AKC following suit ten years later in 1991.

These petite canines can live happily in an apartment and only need 30 minutes of exercise each day. Although Chinese Crested puppies will need extra outdoors time for potty training. A run around the garden can be enough activity for this toy breed.

During the winter months, Cresteds are very susceptible to the cold, particularly the hairless variety. So they’ll need a coat when going outdoors! Apply sunscreen to hairless Cresteds during hot weather to prevent sunburn.

Hairless Chinese Cresteds will need extra care for their skin. Apply lotions to prevent dryness. Hairless varieties can be washed every 1-2 weeks. This breed is prone to blackheads and acne if their skin is dirty.

The Powderpuff should be brushed twice a week to prevent tangles. Never brush when dry, instead use a bottle to spray some water on their soft, straight coat. Fur should be left full length but can be trimmed, especially around the face.

Use cotton wool to clean debris from the ear weekly. Nails will need to be filed every ten days. Overgrown nails will cause incredible discomfort. Vets recommend teeth are brushed daily.

Find out the breed-related health conditions of the Chinese Crested dog below:

Glaucoma: A sudden increase of intraocular pressure in the eye will cause severe pain, redness and blindness.

Progressive Retinal Atrophy: This inherited degenerative condition affects the photoreceptor cells within the eye. It progressively leads to blindness.

Lens Luxation: An inherited condition that weakens the threads holding the lens. This will cause the lens to shift out of position. It may be painful and can cause permanent blindness.

Legg-Perthes Disease: The diseased hip joint will crumble and collapse but an operation by removing the hip joint can prevent this.

Luxating Patellas: The kneecap shifts out of position temporarily before quickly relocating back into place. Affected dogs are unable to extend their leg properly.

Atopy: A common itchy skin condition that is incurable. Owners will have to learn to manage the symptoms.

A Chinese Crested puppy is eager to please so begin training as soon as possible. It can be difficult to house train Chinese Crested puppies. Crate training is recommended, especially for those living in flats. Consistency and routine is key to housebreaking this canine.

Chinese Crested Powderpuff dogs are just like the hairless varieties. The only difference is their fur. Positive reinforcement is the best training method for these canines. Harsh corrections can upset this sensitive pooch!

Early socialization is key to having a well-rounded dog. As a toy breed, unsocialized Chinese Cresteds can feel intimidated by unusual sounds and sights. It may result in fear-based aggression. Socialization with other dogs, humans, and places will be important throughout their lives.

Don’t baby the Chinese Crested. They can quickly develop ‘Small Dog Syndrome’ which could land them in trouble when out and about. Growling, guarding items, snapping and even biting are all signs an owner is losing their pack leadership position.

Both Powderpuff and Hairless Chinese Crested dogs are highly intelligent. They can be taught unique tricks such as standing on their hind legs whilst balancing a treat on their nose! All thanks to their elongated feet!  Agility and obedience are excellent categories for Chinese Cresteds although their stubbornness can hold them back.