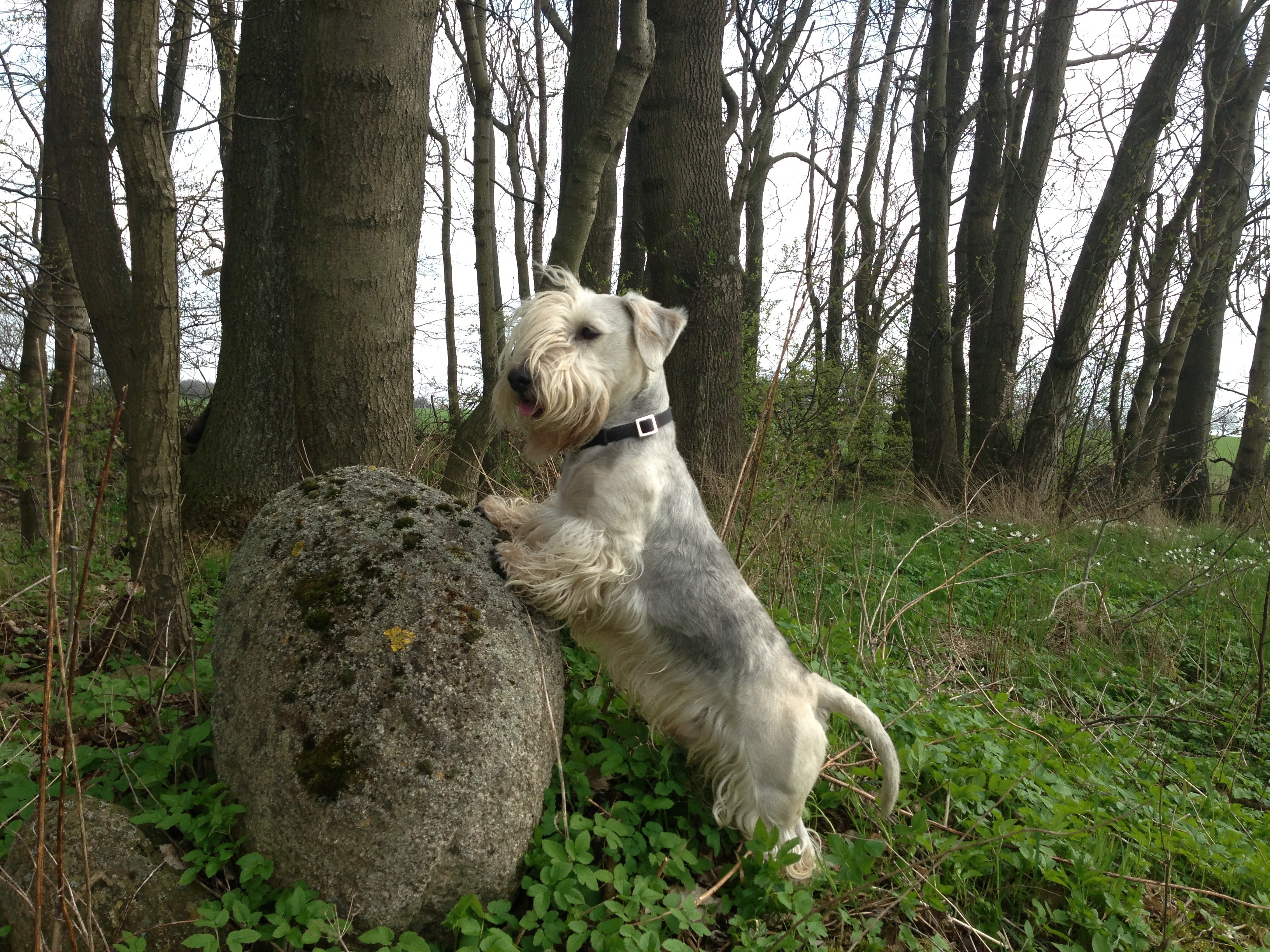 The Cesky Terrier is the National Dog of the Czech Republic. They’re a cross between the Scottish and Sealyham Terrier. Today the Ceskie is one of the world’s rarest breeds!

The Cesky Terrier is an achondroplastic breed as he is longer than he is tall. Dog breeds that have dwarfism must wait until their growth plates are fully formed before jumping or climbing stairs. Over exercise is incredibly damaging to their joints. Other achondroplastic breeds include the Skye Terrier, the Swedish Vallhund, and the Glen of Imaal Terrier.

This breed is rare so potential owners will need to join a waiting list to register their interests in a puppy. It’ll be very hard to find a Cesky Terrier rescue centre in the UK. In 2020 there were 38 Cesky Terrier puppies registered with the Kennel Club. The second-highest total in a decade behind 2019 at 43.

Below are the pros and cons of the Cesky Terrier dog breed below:

The Cesky Terrier is a small-medium dog breed with a robust and muscular body. It’s short-legged with drop ears and a long soft coat. Hand stripping isn’t required for this coat, unlike other Terrier breeds. Their coat colours are found in Grey Blue, and Light Coffee Brown.

The Cesky Terrier is a friendly canine that’s calmer than its other Terrier cousins. This breed isn’t known to show aggressive or nervous behaviour unless unsocialized. Quiet in the home and cheerful around the family, this dog makes a great companion!

Loving and deeply loyal, Cesky Terriers can’t be left alone regularly as they’re prone to separation anxiety. This breed is better suited to homes where at least one person is in during the day. Although lively, Cesky Terriers don’t require heavy amounts of exercise.

Contained within this small dog is a loud and powerful bark. As a natural watchdog, this breed will immediately alert its owner to a knock on the door or a trespasser. Cesky Terriers are typically reserved with strangers but never aggressive.

Ceskies are more fragile than other breeds as they’re achondroplastic. Homes with older children are better suited for a Ceskie. They’re lively characters and enjoy playing interactive games. The Cesky Terrier will be a great playmate and affectionate companion.

Well-socialized Cesky Terriers will get along well with other dogs. They aren’t known to court fights quite as much as others in the Terrier family! This breed can live happily in a home with other canines and even cats! Smaller household pets like rodents will be chased!

Horak started a breeding programme to produce a Terrier that could go to ground but could also work in packs. A dog with a temperament more obedient and gentle than other Terriers. He set up hunting kennels and had some of the best Scottie and Sealy Terriers in the country.

His kennel Lovu Zdar means Successful Hunter. Horak documented all of his dog’s bloodlines making the Cesky Terrier one of the most documented dog breeds alive. He developed the coat to be silky so it’s easier to look after and managed to reduce the aggression seen in Scottie and Sealy Terriers.

In 1949 Horak produced the first Cesky litter but only one puppy survived into adulthood. Unfortunately, this dog was accidentally shot by a hunter which caused a setback to the breeding programme. Nevertheless, Horak was still determined to progress the Cesky Terrier, the first National Czech breed. In 1963 the Ceskie received FCI recognition.

Ceskies will feel bored due to a lack of mental stimulation. Dog sports are a good way to keep them stimulated and exercised. This breed is a great competitor in agility, obedience, and earthdog trials. As this breed is prone to weight gain it’s important to keep them fit and healthy.

A Cesky Terrier should be brushed a couple of times a week to keep its coat tangle-free. Their coat texture is soft and silky. The leg and facial hair need daily brushing. Keep an eye on the underarms as this area is prone to matting. The coat will require occasional trimming as opposed to hand-stripping. Use a soft bristle brush, pin brush, and comb for their fur type.

Clean the ears weekly to remove dirt and debris from the ear canal. Introduce grooming techniques such as nail trimming during puppyhood. Nails should be clipped at least once each month. Vets recommend brushing a dog’s teeth daily to prevent dental disease.

Before putting the Cesky Terrier in the bath give the coat a thorough brush. This will prevent the fur from matting when wet. These canines don’t shed their fur naturally so debris often stays in the coat. Baths should be given around every 8 weeks or sooner if they’re very dirty.

Recommended: What exactly is a Xoloitzcuintli?

Below are the breed-related health conditions of the Cesky Terrier:

Patella Luxation: The term luxating means out of place and the patella is a dog’s kneecap. Dogs can lead normal lives with this condition as the kneecap will go back into position as quickly as it fell out.
Scottie Cramp: A neurological condition that typically occurs after exercise or stress. Affected dogs will lose control over their limbs for approximately 10 minutes.
Primary Lens Luxation: (Hasn’t been detected in Cesky Terriers in the UK) The zonular fibres holding the eye in place disintegrate resulting in the eye falling out of position.
Cancer: Cesky Terriers can suffer from cancers such as lymphosarcoma.

Respect training comes first for any Terrier! They must acknowledge the pack pecking order in their household. Cesky Terriers are calmer and less aggressive than other Terrier breeds, which makes them easier to train. First-time owners can be good for this dog.

Positive training methods work best for the Ceskie. Reward every good behaviour and reinforce household boundaries if they are broken. Avoid dishing out too many food treats as Cesky Terriers are prone to weight gain. Use toys, affection and praise.

A well-socialized Cesky Terrier will get along well with other dogs so they must be socialized during puppyhood! Join a group puppy class where the Ceskie can meet new canines and people all while learning new commands! Take them to new places where they can experience different sights and sounds.

Small Dog Syndrome is a behavioural condition primarily caused by fear. Dogs may lunge at other larger dogs, bark, and display dominant behaviour to humans. A lack of socialization and training will cause a small breed to develop this syndrome. Due to their size, this could land them in a lot of trouble!

Keep training sessions enjoyable to avoid boredom. Ceskies are independent and do have a stubborn streak so it’s important to be patient. If they’re showing disinterest move on to something new. Ceskies are intelligent canines and can even be trained into therapy dogs.