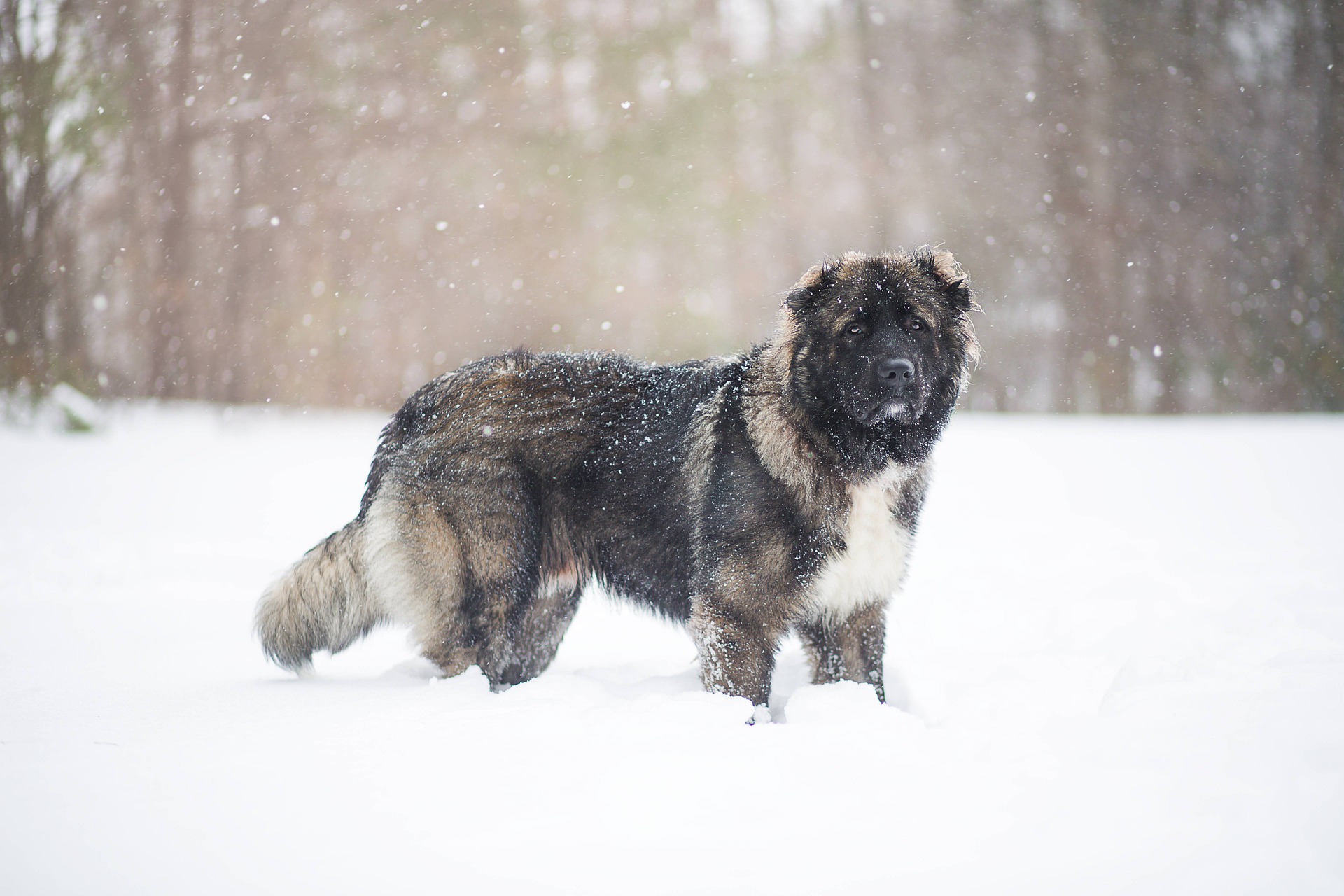 The exquisite Russian Bear Dog is a formidable giant breed, growing in popularity here in the UK. It holds an extensive history and fascinating background. Learn more about this dog in our guide below!

Russian Bear dogs are giant livestock guardians still found working in the Caucasus region to this day. In Russia, the breed works as a prison guard! No criminal can slip past them! Over the years their need as a protection dog has risen but they still have natural herding instincts.

Slowly but surely, the Caucasian Shepherd’s popularity is slowly growing in the UK. Despite not being recognised by the Kennel Club, more and more UK dog enthusiasts are showing interest in the breed. However, only experienced owners are recommended for this canine.

Check out the pros and cons of the Caucasian Shepherd Dog below:

The Caucasian Ovcharka is a giant herding breed remembered mostly for its remarkable size. Their coat is thick and dense so this breed isn’t very tolerant to hot weather. Coat colours are found in Fawn, Black, White, Cream, Rust and Grey.

A Caucasian Shepherd is a confident, fearless, powerful, dominant, yet calm dog. It’s not suitable for first-time owners and requires a firm, experienced leader. This guardian breed is protective of their families, facing any threat head-on.

At home, the Caucasian Ovcharka is gentle around the people he loves. Whilst the breed is devoted to its leader, it’s independent enough to stay on its own for a few hours. They’re intelligent canines and are still used as a working dog today.

Naturally distrustful of strangers, the Caucasian Shepherd is highly territorial. Regular socialization is needed to prevent strangers from being recognized as instant threats. Caucasian Shepherd dogs are excellent guard and watchdogs. They don’t need protection training!

Loyal to its family and calm in the home, Caucasian Shepherds are great for households with older children. Due to their herding background, they may display these behaviours to smaller children. Their size could also cause accidental injuries. Those that are unsocialized may take a dislike to children they don’t know in their home.

This breed doesn’t get along well with other dogs. They won’t be the first to make friends in the dog park! Caucasian Shepherd puppies should still be socialized with other canines. However, owners should take caution. This dog is better suited to single dog households.

The Caucasian Ovcharka is an ancient breed descended from Molossoid dogs. They originate from the Kavkaz (Caucasus mountain region). The countries found in this region include Georgia, Daghestan, Turkey, Osettia, Chechnia, Azerbaijan, Armenia, Iran, Ingushetia, and Kabardino-Balkaria.

The breed is used for guarding and herding flocks. They’re a formidable breed, defending their livestock from predators such as wolves, bears, and jackals. They’d also assist hunters with bear hunting and are still active working dogs today.

Many countries across the world have found a need for the Caucasian Shepherd. In the 1960s Germany decided to use the breed to patrol the Berlin Wall. During the 1900s the USSR also began using Caucasian Shepherds for guarding those in prison. It’s a job they still do today!

The USSR is responsible for the modern Caucasian Ovcharka. In the 1920s, selection breeding took place. They developed its hearing, sight, and waterproof coat. Their rugged appearance and dense coat allow them to work in some of the toughest conditions.

Caucasian Shepherd Ovcharka dogs enjoy daily walks and should have access to a large garden. They shouldn’t be allowed off-leash unless in an enclosed space. Ideally, around 90 minutes of exercise across the day should suffice.

Caucasian Shepherd puppies shouldn’t be exercised as often. Their growing joints are susceptible to injury. Jumping and stairs should also be avoided. Interactive games such as a game of fetch are sometimes more than enough until they need a rest again!

As an intelligent breed, mental stimulation is needed to prevent boredom. Anything that gets the mind ticking over! Hide and seek or food puzzle games are some ways to do this. Caucasian Shepherds enjoy long walks and hikes where they can explore new environments.

It’s pretty obvious this breed is high maintenance on the grooming front. Some dogs are longer coated than others. They’ll require daily brushing. Caucasian Shepherds will blow their coats twice a year. Heavy shedding is to be expected. A grooming rake and slicker brush are ideal tools to use.

Bath this breed up to 5 times a year. Frequent bathing will cause a dull coat. Clean their ears weekly to remove debris. To prevent dental disease brush their teeth at least three times a week. Nails need to be trimmed fortnightly.

Recommended: Which dog is known as the Tax Collector dog? Find out here!

Below are the breed-related health issues of the Caucasian Shepherd dog.

Caucasian Ovcharkas need a firm leader that can handle their dominant and stubborn personality. This breed mustn’t cross the boundaries. They’re smart and will quickly work out who is a pushover! Spend time training the Caucasian Shepherd puppy each day in ten minute sessions.

Owners will need to spend considerable time on their obedience. It won’t be easy but they will get there in the end! This breed is highly protective and requires heavy socialization in its early years. They don’t take well to strangers in their territory.

With the right direction, they’ll learn their place in the pack! This breed isn’t difficult to housebreak and is smart enough to quickly pick up on basic commands. Training must start as early as possible. the older they get the harder it becomes!

Group puppy classes are highly recommended. It’s a great way to get the Caucasian Shepherd puppy exposed to new people and dogs. A routine is incredibly important for a working breed like the Caucasian Ovcharka. It’s something they can follow and look forward to throughout the day.

Recommended: Take a look at our breed guide on the Afghan Hound.