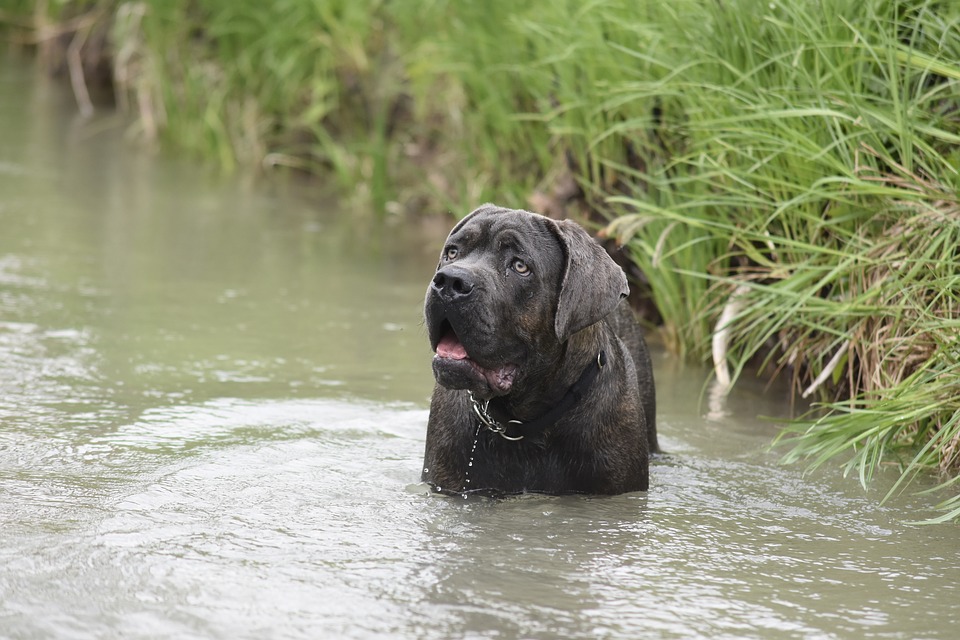 A formidable guardian and loveable member of the family. The Cane Corso is not yet recognised by the Kennel Club but is growing in popularity across the UK. Let’s learn all about the Italian Mastiff.

The Italian Mastiff is one of the newer breeds gaining popularity in the UK. It hasn’t yet received recognition from the Kennel Club but is recognised by the AKC and FCI. There are two breed clubs in the UK, The Cane Corso Appreciation Society UK and the Cane Corso Kennel Club UK.

Cane Corsos typically have their ears cropped and tails docked. This practice has been banned in the UK since 2007. It is still practised in some parts of the world including America. The operation occurs during puppyhood and is done to prevent infection and injury in working Cane Corsos.

Learn about the pros and cons of the Cane Corso dog breed below.

The Cane Corso is a giant dog breed with a muscular body and long jowls. Their double-coated fur is short and sheds throughout the year. Coat colours are found in Black, Grey, Fawn, Red, Wheat, and Brindle.

The robust and powerful Cane Corso requires strong and firm leadership. They can easily become aggressive in the wrong hands. In the home, this breed is gentle and placid, defending their territory if needs be. Italian Mastiff puppies may be a little nippy growing up!

Italian Mastiffs are agile and require lots of exercise. They also need at least one member of their household to be home with them throughout the day. Cane Corsos are devoted and loving to their families but need thorough training and socialization to become well-rounded dogs.

This breed is naturally suspicious of strangers. If they’ve been socialized they’ll accept household visitors. If they sense a threat they will face it head-on. This guardian breed will be on the alert ready to protect its family.

Cane Corsos are excellent playmates for children. Their size is a risk for causing accidental injuries amongst smaller kids. Nevertheless, the Cane Corso is great with children thanks to the calmer side of its temperament. It’s best to introduce a Cane Corso puppy to a home with kids.

In the dog park, these canines can make friends but altercations could arise between those of the same sex. Early socialization is important to promote and maintain friendly behaviour. They can live with other dogs. Cats should be introduced during puppyhood so they aren’t viewed as prey.

The Italian Mastiff is a descendent of Roman Molossian dogs. Molossers came from Ancient Greece. During the Roman Empire’s invasion of the Greek islands, these dogs were transported to Ancient Rome. They were then bred with native Italian breeds.

The dogs produced from the breeding are ancestors to the Cane Corso and its closely related counterpart the Neopolitan Mastiff. Its name is taken from the Latin word ‘cohors’ which translates to ‘guardian’.

No surprise then, that the breed was an excellent livestock guardian and defender of its territory. These canines were also used for hunting large game such as badgers, lions, coyotes, wild boars, and even bears! Herding cattle was another one of their daily farm jobs too!

An intimidating and formidable dog, Cane Corsos were commonly found in farms across the Italian countryside. However, by the arrival of the mid-20th century, this breed was almost extinct.

In 1970 a group of Cane Corso breed enthusiasts sought to revive the breed. They created the Society Amorati Cane Corso in 1983 and ten years later were exporting Cane Corso dogs across Europe! In 1997 Capo and Nala were the first two Cane Corsos to be imported into the United Kingdom.

Italian Mastiff dogs require two hours of exercise per day. Cane Corso puppies should not be over-exercised until their growth plates are fully formed. Activity time should be split across the day as opposed to all in one go. Avoid exercise in hot weather to prevent heatstroke.

Recommended: What are the signs and symptoms of heatstroke in dogs? Find out here!

These active canines aren’t exactly the quickest of runners but are definitely not couch potatoes! Due to their working past Corsos need mental stimulation. Puzzle games or hide and seek with treats are some ways to do this.

Cane Corsos have minimal grooming needs. Give them a brush once a week to remove dead fur. Increase this during the spring and autumn months. A rake, slicker brush, and rubber brush are all ideal tools to use.

Bath this dog every 6-8 weeks. No sooner as this will strip their coat of its natural oils. If the Cane Corso has kept its ears it’s vital they are cleaned weekly to prevent infections. Trim their nails fortnightly and brush their teeth daily.

Due to the breed’s long jowls, they drool heavily. Slobber is inevitable! Owners should keep a towel to hand to wipe their mouth after they eat and drink. Exercise will also naturally increase drooling.

Below are the breed-related health conditions of the Italian Mastiff:

Elbow Dysplasia: Abnormal development of the elbow joint is a primary cause of lameness in young large breed dogs. Affected dogs will experience some pain, swelling, inflammation and eventual arthritis.
Hip Dysplasia: Similar to Elbow Dysplasia but targeting the hips. Also carries the same symptoms and will also lead to arthritis.
Entropion: The eyelid will roll inwards causing the eyelashes to scratch the surface of the eye. This will cause corneal ulcers, possible pigmentation development, discomfort, and can affect both the upper and lower eyelids.
Ectropion: The eyelid rolls outwards exposing the inner tissues of the eye. This will cause discomfort and dryness. Typically affects dogs with droopy skin such as the Cane Corso.
Cherry Eye: The tear gland prolapses causing the dog’s third eyelid to become inflamed. It isn’t painful but may be itchy.
Gastric Dilatation Volvulus: A life-threatening condition causing the stomach to twist trapping the contents inside and filling with gases. Immediate veterinary attention must be sought.

A firm, strong leader is required for the powerful Cane Corso. They will quickly dominate any pushover and are not ideal for first-time owners. Their pack leader must be consistent with discipline.

Once the pecking order has been clearly established this breed will become devoted to its owner. They are easy to train in the right hands and are eager to please! Positive reinforcement is the best way to get the Corso to listen. Avoid too many food treats as they’re prone to weight gain.

Socialization is very important in producing a confident friendly dog. An Italian Mastiff puppy should begin training from as early as 8 weeks. This is when they’re most impressionable. Attend group puppy classes to enhance socialization whilst learning basic commands.

As this breed is prone to separation anxiety they mustn’t be left for longer than 4 hours at a time. Start practising this at an early age so they can gather independence. Crate training is one suitable method as it’s often viewed as a safe space they can retreat to.