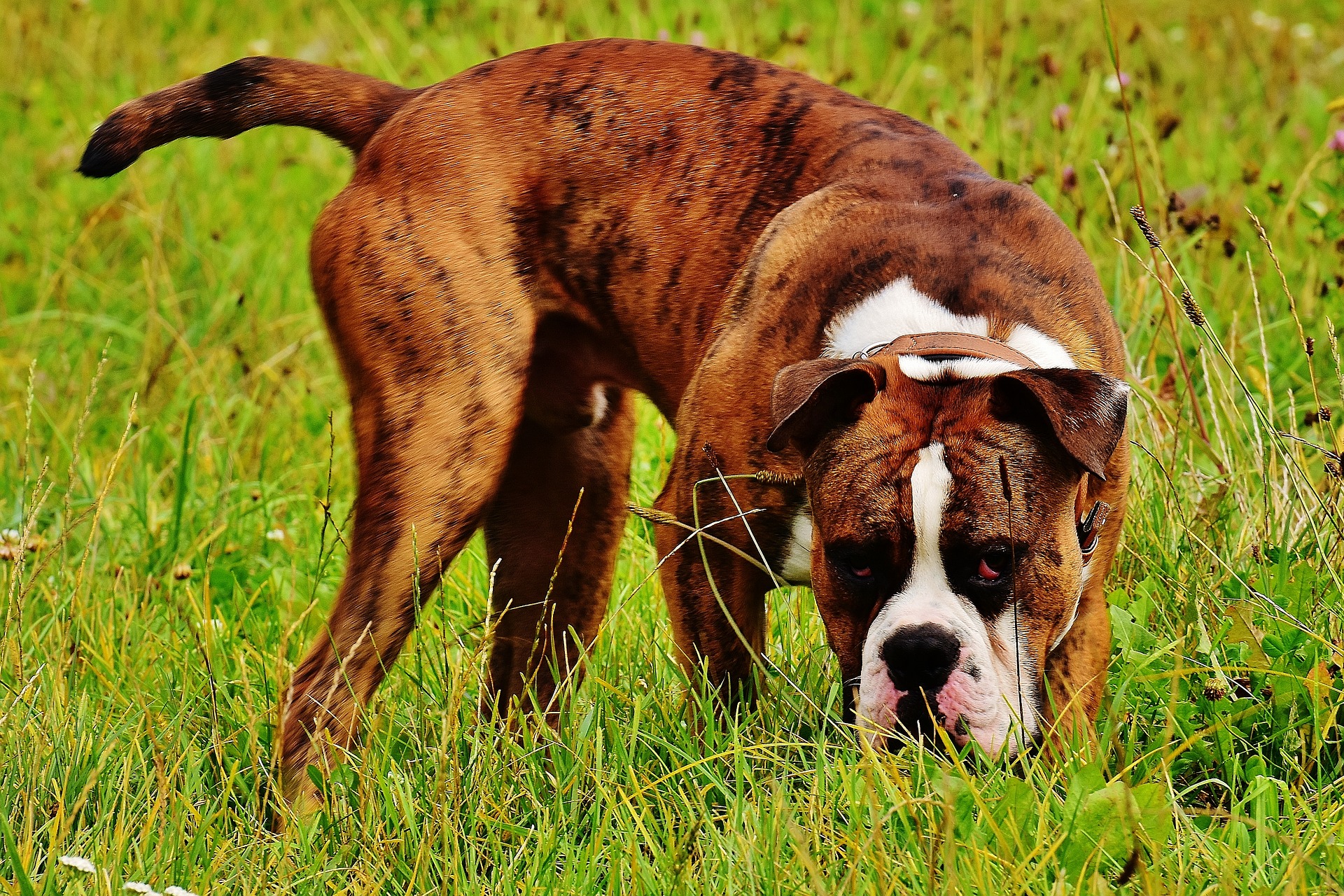 Britains most favourite working dog breed is the Boxer! A firm favourite sitting on Britains top 20 dog breed list for over a decade! Learn all about the Boxer dog in our comprehensive guide below.

The Kennel Club lists Boxers under Breed Watch Category 2. Their points of concern are pinched nostrils which interfere with breathing. Boxers are flat-faced so they’re a Brachycephalic breed which puts them at risk of Brachycephalic Obstructive Airway Syndrome. Due to its hunting heritage, they’ve been classed under the Working Group.

Check out the pros and cons of the Boxer dog breed below:

Boxers are a medium-large dog breed featuring a distinct square head and muscular body. Their single-layered coat is short and doesn’t shed large amounts of fur. The coat is easily maintained and is found in colours fawn and brindle both of which may include white markings. White Boxers aren’t unheard of and the American Boxer Club estimates 25% of Boxers are born white.

Boxers are known for having a rather comical and humorous character. Goofy and on occasion clumsy, the Boxer dog is often referred to as the clown of the dog world! They are boisterous and bursting with energy so require lots of outdoors time.

This breed is demanding and if their needs aren’t met, destruction and bad behaviour will be their outlet. Deeply intelligent, this dog wants to live life to the fullest so it’s unsurprising they come with a stubborn side! A firm, experienced owner is recommended.

As a watchdog and guard dog, Boxers are wary of strangers but given the right socialization, will be friendly. They’ll become aggressive if they sense a threat so it’s very important Boxer puppies are thoroughly socialized.

This brave, confident, and fearless canine is a great addition to families with older children. Due to their bubbly, energetic nature, they could accidentally knock over a smaller child. Affectionate, playful and loving towards all members of the family, the Boxer will instinctively protect those it loves!

Boxers aren’t exactly trusting of other dogs and can go head to head with those of the same sex. Their dominant and territorial behaviour is a contributing factor to disagreements. A Boxer puppy needs lots of socialization to ensure friendly behaviour with other canines.

Recommended: The Basenji is one of the world’s oldest dog breeds. Learn all about it here!

The Boxer is another popular German protection dog developed during the 1800s. Descended from the extinct Bullenbaisser, Mastiffs and Bulldogs, this breed was initially bred to chase and pin down large game. Their prey included Wild Boar, Bison, Deer and even Bears!

As a working breed, the Boxer also undertook a variety of other jobs. They were used for bull-baiting, a bloodsport popular in its heyday. Boxers would also assist butchers in the slaughterhouse by controlling the cattle. Later down the line, they found a new position alongside the police and army.

Just three years later in 1954, Boxers had risen to Britains 4th most popular dog breed! Decades later although their position has slipped down the line, they’re still in the UK’s top 20 dog list! The working breed is still used by police, and has since ventured into guide dog and therapy work!

In World War I & II the Boxer was found on the frontline. They were widely used as messengers, pack carriers, and attack dogs. After the end of World War II, returning soldiers brought back Boxers. It wasn’t long before they became one of the world’s most famous dog breeds.

In 1895 the Deutscher Boxer Club was established with the first breed standard issued in 1904. That same year, the breed received recognition from the AKC. In the UK, 1936 the British Boxer Club was formed. By 1951 there were 4,500 KC registered Boxer puppies that year!

Boxers require an active owner that can dedicate over 2 hours of exercise each day. They’re high in energy and will display puppy-like behaviour longer than other breeds. Split up their exercise time across the day as opposed to all in one. A bored boxer will quickly get into mischief!

It’s important they have some off-leash time so they can really let loose. This should take place in an enclosed area. Given enough time and training Boxers can participate in dog sports. Agility, rally, obedience, and even herding are their best categories.

Mental stimulation is important for the intelligent Boxer dog. Simple games, for instance, hiding food treats around the home, are great ways to keep their minds ticking over. Teaching them new tricks, letting them sniff around, even a small garden obstacle course is mentally stimulating.

Boxer dogs are low maintenance on the grooming front and only need a weekly brush to remove dead fur. Whilst they don’t moult consistently, shedding will be heavier in the spring and autumn as their single-layered coat grows thicker due to colder weather.

Give them a bath every 2-3 months as frequent bathing is damaging to the skin. Ensure their facial creases are regularly wiped to prevent skin fold dermatitis. Wipe their ears weekly to remove any debris. Trim their nails every ten days and don’t forget to brush their teeth!

Find out the breed-related health conditions of the Boxer dog below:

It’s been estimated that 22% of Boxer puppies die due to stillbirth (dystocia).

Boxers will need thorough and consistent training throughout their lives. As they hold onto their puppy years for longer, it’s important owners don’t give in or dismiss bad behaviour. Boxers are extremely demanding and do best when one person from their household is at home for most of the day.

First-time owners aren’t recommended for this breed. Despite their high level of intelligence, they’re still a handful to train! Positive reinforcement methods work best for these fast learners but remember, they can pick up bad habits just as fast as good.

Socialization is very important for Boxers, especially since their instinct is to guard their family. They’ll need to learn that not every stranger is a threat and dogs of the same sex can be their friend! Group training classes are good ways to teach commands whilst also socializing with both humans and canines!

The breed is relatively easy to housebreak and is naturally clean. Take a Boxer puppy for a toilet break 15 minutes after they’ve eaten or drank. Reward them once they go potty outdoors. It’s best to take a dog to the same potty spot as repetition is key.

Boxer puppies are boisterous so it’s worth teaching them the ‘Down’ command. It’s essential this breed is being given the correct amount of exercise. Training will be meaningless if a Boxer puppy is filled with pent up energy.

Recommended: Which dog is referred to as the American Gentleman. Find out here!