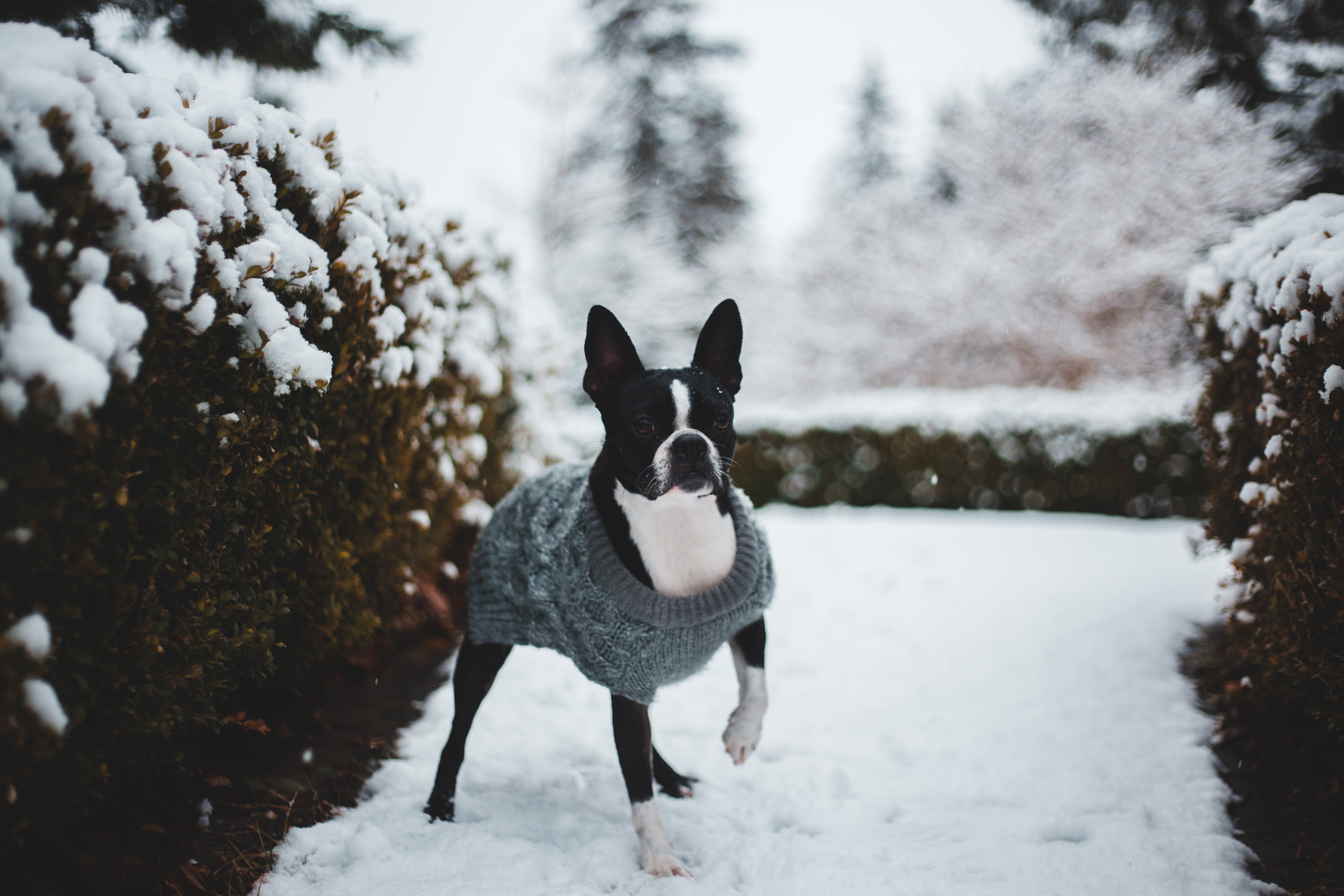 The American Gentleman was the first non-sporting breed in the United States. These tiny companions have won the hearts of dog enthusiasts across the world! Check out this canine in our detailed guide below!

Boston Terrier Exercise: Up to 1 hour per day

A gentle dog, with a great sense of humour, the Boston Terrier is great for companionship. They’re lively, intelligent and on occasion, stubborn, so they’ll need a firm leader, not a pushover! Boston Terriers can be a little dominant and will try to push the boundaries.

Boston Terriers form strong bonds with their owners thus making them prone to separation anxiety. These intelligent dogs are easy to train if given consistency. Compared to females, male Boston Terriers tend to be a little more territorial.

As a watchdog, the Boston Terrier will bark at the knock of the door. They’re protective of their owners but don’t make good guard dogs. Boston Terriers may be wary at first but are typically friendly towards strangers.

Energetic and playful, Boston Terrier dogs fit well into a family environment. They’re robust enough to enjoy play and their small size reduces the risk of injuries to children. The breed is suitable for families with babies, young and older children.

Boston Terriers are more people-orientated. They’re not an aggressive breed but it’s not uncommon for males to get into scraps with other dogs. Regular socialization is needed throughout their lives to morph them into the friendly outgoing dog we know and love! Unlike other Terriers, this breed can live alongside cats.

Recommended:  Take a look at the wolf-killing dog here!

Below are the positives and negatives of the Boston Terrier dog breed.

The Boston Terrier is a small to medium-sized breed. Their coat colours can be found in seal and white, black and white, and brindle and white. Boston Terrier tails are no longer than two inches. Their eyes are one of their more distinguishable features. They’re round, large, with a wide gap in-between.

Boston Terrier dogs originate from the United States however, their existence began in England. During the 19th-century dog, fighting became hugely popular in the UK. Terriers and bull-type dogs were crossed to create the best fighting and ratting dogs.

In Liverpool, during the 1860s the now-extinct White English Terrier and the Bulldog produced a litter. One specific dog born to this pair was called Judge. He was sold to William O’Brien, an American who took the dog back to Boston, his hometown.

Here, Judge was then sold on to Robert C. Hooper in 1870 who was also from Boston. The dog was then renamed Hoopers Judge. He is the common ancestor of nearly every modern Boston Terrier today!

Judge was then bred to a white female bulldog-type owned by Edward Burnett from Southboro, Massachusetts. From this litter, breed enthusiasts were able to refine the Boston Terrier into the dog we know today. The aggressive Boston Terrier temperament and stocky build soon became a memory of the past. Originally they used to weigh up to 20 kilograms!

In 1889, the American Bull Terrier Club was formed but by 1893 the name was changed to the Boston Terrier Club. The breed was the first non-sporting dog to be recognised by the AKC. Since 1979 they’ve been listed as the official state dog of Massachusetts.

The first Boston Terrier, Mr Smith’s Brindle Beauty arrived in England in 1901. Four years later The Countess of Essex brought a few Boston Terriers back to England. She was responsible for the breed’s popularity in the UK and in 1935 created the Boston Terrier Club UK.

These small sturdy canines only need up to an hour of exercise each day. This can be in the form of a couple of brisk walks. As a brachycephalic breed, they’re susceptible to heatstroke. Owners should be wary when walking the Boston Terrier during hot days.

Due to their size, they can happily live in flats but ideally, access to a small garden would be best. Boston Terrier puppies will need extra outdoors time for housetraining purposes. As a non-sporting breed, these canines have low exercise needs.

Boston Terriers are highly intelligent and will need mental stimulation. Puzzle games, hide and seek, interactive play, tricks, and even sniffing around are ways to mentally stimulate a pooch. Dog sports such as flyball, obedience, and rally will also keep the brain ticking over.

When it comes to grooming, Boston Terriers are on the lower end of the maintenance scale. Their coats shed moderately so use a bristle brush to go through their coat once a week. This helps to keep their coat healthy.

Baths them every 1-6 weeks depending on how dirty the dog gets!  A Boston Terrier puppy should be introduced to grooming methods as early as possible. This will prevent fear, allowing the dog and owner to bond during the process.

The pointy ears of the Boston Terrier let air flow into the ear canal. But they should still have their ears cleaned once a week to remove any debris. Trim their nails every ten days and brush them daily.

Check out the breed-related health issues found in the Boston Terrier dog breed.

Atopy: A common itchy skin condition caused by a dogs hypersensitivity to specific allergens. There is no cure therefore owners will need to learn to manage the symptoms.

Luxating Patellas: The kneecaps temporarily dislocate out of place before returning back into position. Affected dogs are unable to fully extend their leg.

Cherry Eye: The tear gland becomes inflamed resulting in a red swollen mass. This area is often referred to as the ‘third eyelid’ and is caused by a prolapsed nictitating membrane.

Dry Eye: Also known as Keratoconjunctivitis Sicca, dry eye occurs when the eye doesn’t produce the normal amount of tears. The dryness may cause ulcers or infections.

Cushing’s Syndrome: The Adrenal Glands produce a hormone named Cortisol, a chemical that helps dogs respond to stress. Cushing’s Syndrome is caused by the overproduction of this hormone. Increased thirst, urine, appetite, hair loss, and recurring skin infections are some of the symptoms.

Cataracts: When a dogs eye changes lens an abnormal cloudiness appears, known as Cataracts. If it’s large enough, the light will be prevented from reaching the retina thus causing blindness.

Glaucoma: An increase of aqueous fluid build-up will cause pressure in the eye. Symptoms include redness, intense pain, and a loss of vision.

Deafness: In Boston Terriers most cases of deafness are congenital and hereditary. Studies have shown dogs with blue eyes are at a higher risk of deafness.

Most Boston Terriers require c-sections to deliver their puppies due to their small pelvic bones.

It’s important to socialize a Boston Terrier as early as possible. Smaller dogs can be anxious about loud sounds, and moving objects. These Terriers aren’t fearful of other dogs but need regular socialization to prevent dominant behaviours.

Owners should be firm but gentle. Leaders can’t be pushovers! Be mindful that Boston Terriers are sensitive and benefit best from positive reinforcement. Keep some treats to hand to praise the Boston Terrier puppy for good behaviour.

As the breed is eager to please, training is made so much easier! These intelligent canines pick up quickly on commands and make excellent therapy dogs! They’re also easy to house train and the quickest way to do so is by sticking to a routine.

Persistence is key! Be strict with house rules as the Boston Terrier can be dominant and will quickly walk all over a pushover! When training the dog outdoors be mindful of the heat! These dogs are prone to suffering from heatstroke.

Recommended: Which dog was once prized by the Russian Aristocracy? Find out here!