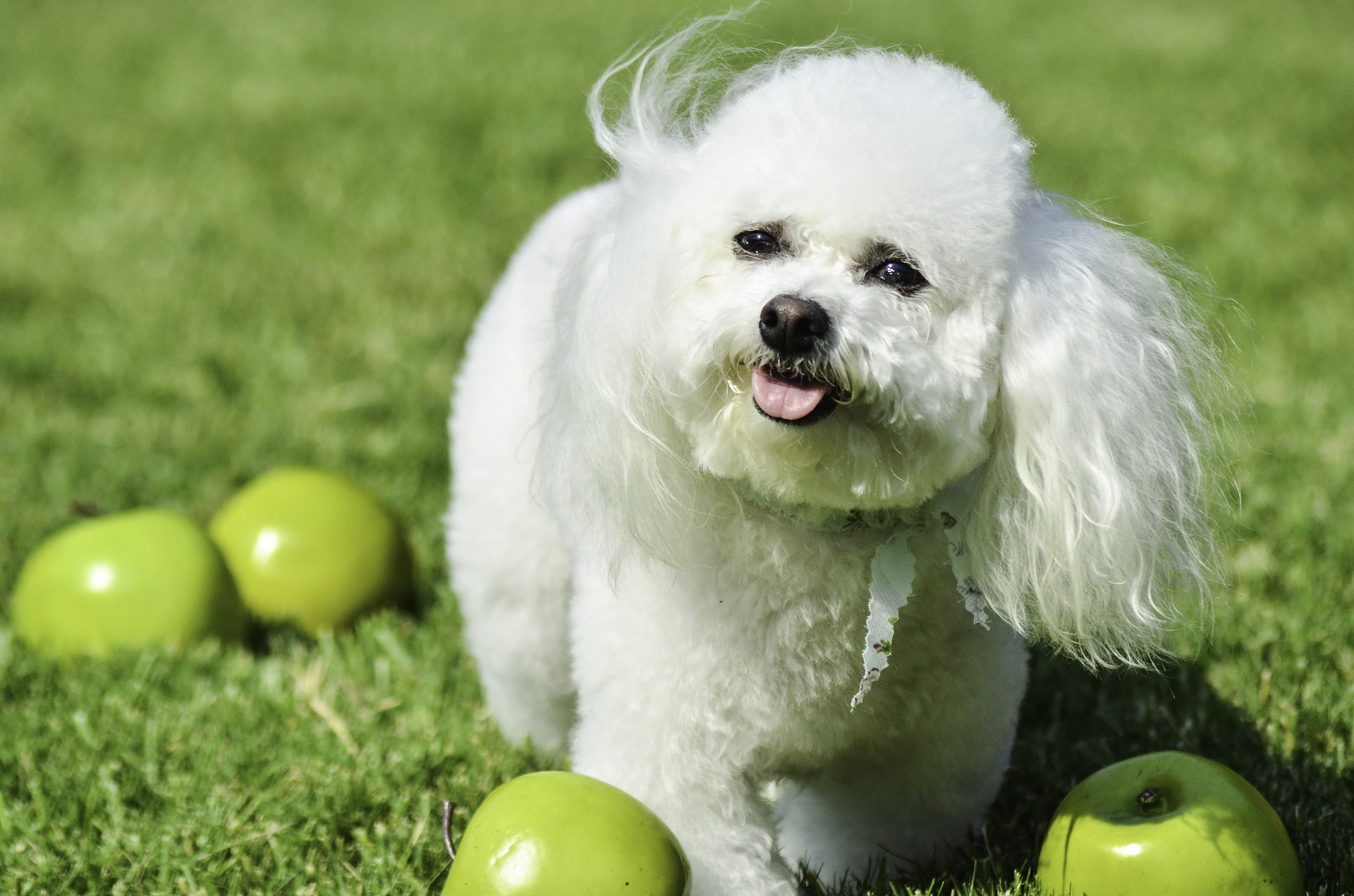 The Bichon Frise is one of Britain’s most popular small breeds. Today, we’re going to learn all about the Bichon Frise personality, health, history, exercise needs and more!

The Bichon Frise is known widely for its white curly coat. A member of the toy group, the Bichon is one of the most popular small dog breeds here in the UK. Thanks to their hypoallergenic and low shedding coat, this breed is better suited to those with allergies.

Bichons are also memorable after featuring in Belgian author Herge’s comic series The Adventures of Tintin. Snowy, the dog is a Bichon Frise but is originally known as Milou by the French. Bichons have a deep and enriched history featuring in many famous paintings across history including the works of Titian, Sir Joshua Reynolds and Francisco de Goya.

Check out the pros and cons of the Bichon Frise dog breed below:

The Bichon Frise dog is a small breed widely known for its remarkable white coat. Even their name Bichon translates to ‘white dog’! Frise describes the curls found on the Bichon. Their soft curls are often styled for presentation in the show ring.

A Bichon Frise is loveable, affectionate and just as adorable as they look! This easy-going canine won’t require much exercise and can live in an apartment. Their sweet personality, lapdog status and sociable nature is a great choice for first-time dog owners.

Bichons require companionship and enjoy being the centre of attention. These dogs are energetic, cheerful, and gentle. A perfect well-rounded dog that’s easy to fall in love with! Their cuddly personality resembles their teddy like features.

This breed isn’t a great watchdog and won’t be on the alert ready to defend their territory. Bichons are polite and even playful with strangers. However, some Bichons may feel a little shy. Of course, this is dependent on socialization during a Bichons early years.

Bichons make excellent family dogs and are great with children of all ages. Their small size won’t be hazardous to kids and these social dogs enjoy playing interactive games with the younger members of their families. Affectionate and playful, a Bichon Frise is a fantastic companion for children.

Bichons love making new friends and get along well with other dogs! They’ll happily introduce themselves to other dogs in the park engaging in friendly play! Bichons are gentle and can live with other household pets including cats. It’s always best for house pets to be raised together as opposed to an introduction during adulthood.

The Bichon Frise is an ancient breed believed to have been introduced to Tenerife by Spanish seamen. Bichons were a part of the Barbichon types which also included the Havanese, Bolognese, and the Maltese. Their ancestor the Bichon Tenerife was the most popular of the group amongst sailors.

Bichons were used by the Spanish as sailing and even herding dogs, whilst the French developed the breed into a lapdog. By the 13th century, the Bichon became popular with European nobles. They were prized by the Royal Families of Spain, Italy and France and were prominent during the Rennaisance period. Their coat was trimmed into a ‘lion style’ and the Bichon would be pampered and carried around in a basket.

In 1789 the arrival of the French Revolution saw many Bichons lose their privileged status. Many were put onto the streets. They soon found solace amongst street performers, earning their keep by performing tricks! Bichons would also perform at the circus and funfair.

During the reign of Napoleon III of France in the late 19th century, the Bichon was such a common dog, it’d be found wandering the streets. The Bichon Frise’s official breed standard was produced on the 5th March 1933. They were originally named the Bichon À Poil Frisé but this was then shortened.

In 1955, the first Bichon Frise was imported to America with the first US-born litter arriving a year later. Bichons quickly grew in popularity across the United States and the United Kingdom. In 2001 and 2018, a Bichon Frise won the Best in Show title at the Westminster Kennel Club Dog Show!

A Bichon Frise dog doesn’t require much exercise. Thirty minutes per day is usually enough. This small breed can easily wear itself out in the garden. Interactive games like fetch are both tiresome and mentally stimulating. Bichon Frise is also suited to living in apartments.

Other forms of mental stimulation include dog sports and despite the Bichon’s cute looks, they make excellent competitors. In particular, this breed excels in agility, rally, and obedience. Keep their brains ticking over indoors by playing games of hide and seek and treat puzzle toys.

This breed’s coat is high maintenance, of course! It’ll require daily grooming to keep it in good condition. A pin brush and slicker brush are the best tools to use. Ideally, a Bichon should receive a bath monthly, unless they’re exceptionally dirty. The fur is thick so wash right down to the skin and ensure all shampoo is thoroughly rinsed out.

To prevent tear staining, trim the fur around the eyes and nose frequently. Owners should remove any crust or dirt around the eyes daily. Use cotton wool and plain water. To remove tear stains already set in, some Bichon owners have found a baking soda paste to be of help.

Ears will need a weekly clean to prevent debris from building up. Nails should be trimmed fortnightly. Smaller breeds are prone to dental issues therefore teeth should be brushed daily.

Check out the breed-related health conditions of the Bichon Frise below:

Cataracts- An inherited condition that causes an abnormal cloudiness after a change in lens. If the opacity is large enough light to the retina will be blocked, resulting in blindness over time.
Luxating Patellas- The kneecap temporarily falls out of position before relocating back into place.
Bladder Stones- Minerals form into small rocks within the bladder ranging in both composition and size. Symptoms include straining when urinating, and blood in the urine.
Portosystemic Shunt- A liver shunt is caused by the abnormal connection between the systemic circulation and the portal vascular system. Blood vessels bypass the liver draining blood directly into circulation without being detoxified.
Diabetes Mellitus- The dog is unable to produce adequate amounts of insulin for the body’s cells. This will affect the dog’s fat, protein and carbohydrate metabolism.
Allergies- A lifelong condition causing itchy skin. Owners will have to learn to manage the condition as there is no cure.

This intelligent breed picks up on training quickly. Bichons can live happily in apartments and respond well to crate training. They love performing so keep a Bichon mentally stimulated by teaching them new tricks. Training sessions should last up to 15 minutes to prevent boredom.

The Bichon Frise is notorious for being difficult to housebreak. It’s important owners establish a routine to help aid potty training. Ideally, they should be let out every 2-3 hours and every 15 minutes after eating and drinking. Use positive reinforcement methods as this breed won’t do well with harsh techniques.

Early socialization is important for all dogs, especially smaller breeds. Fear-based reactions could result in aggressive behaviour so a Bichon Frise puppy should be introduced to a variety of people, dogs, and environments. Puppy training classes will help socialize dogs whilst teaching them basic commands.

The Bichon Frise is prone to separation anxiety when left alone for long periods. For this reason, they should be in a home where at least one person is indoors most of the day. Otherwise, they’ll resort to destructive behaviours. Bichon Frise owners must be consistent and dedicated to training.