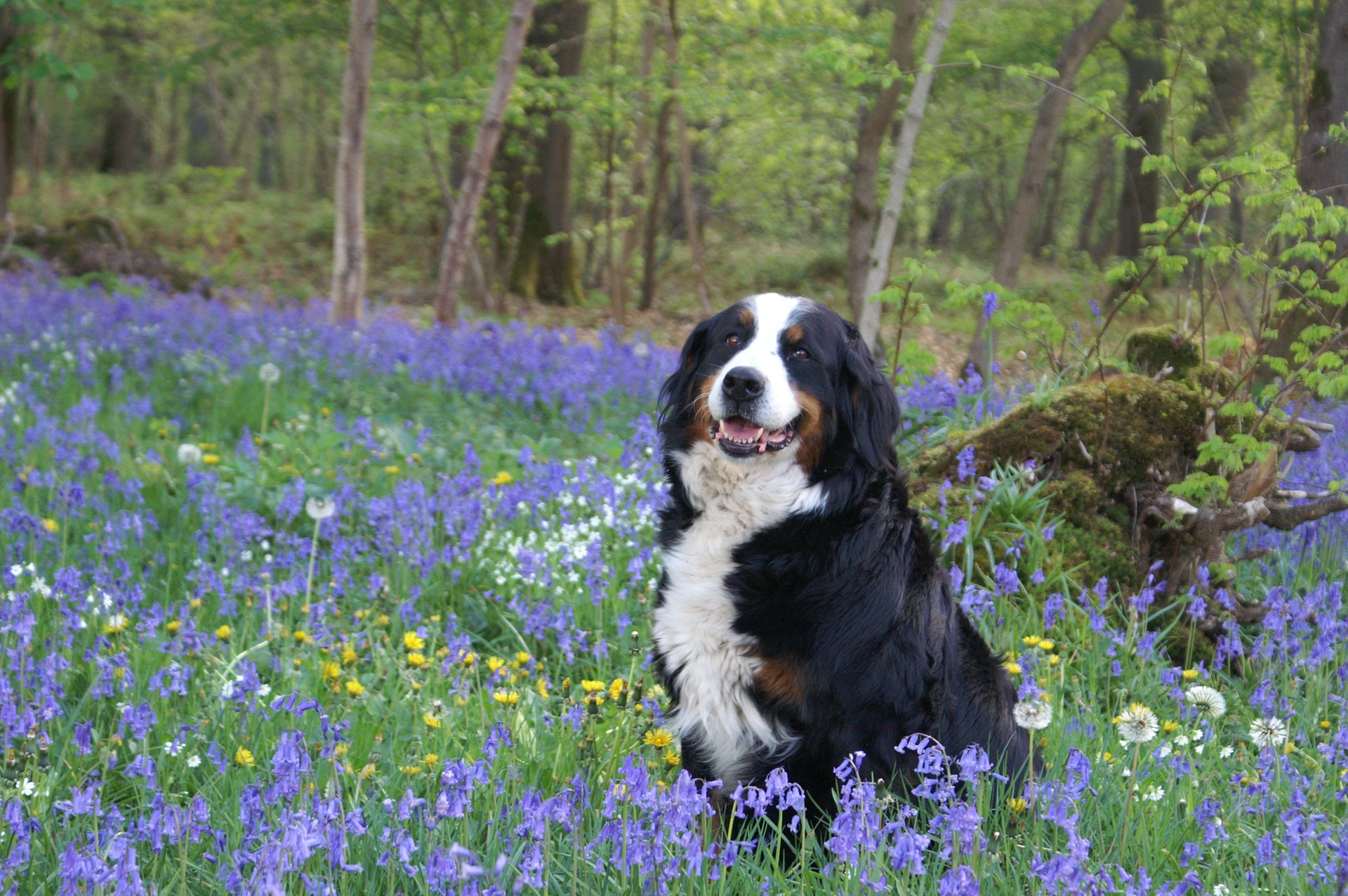 A loveable friendly giant with roots to Roman Mastiffs, the Bernese Mountain dog has a deep history! Learn all about this breed in our guide below!

The Bernese Mountain Dog is a farm dog and one of four Sennehund-types found working in the Swiss Alps. The others include the Appenzeller Sennehund, the Greater Swiss Mountain Dog, and the Entlebucher Sennehund.

Thanks to their friendly, laid-back personality, the breed is suitable for first-time owners. A large garden and home will be needed to accommodate them. Most Berners have a dry mouth and won’t drool everywhere, although this isn’t always the case.

Bernes are a versatile, placid, docile breed and should not display aggression. Unless of course their owner is being attacked! This canine is the definition of a Gentle Giant! Typically well-behaved, the Bernese Moutain Dog is a pleasure to have in the home!

Affectionate, calm, and intelligent, Berners are eager to please and sweet by nature. As a working dog Berners love a challenge and enjoy learning new things! The breed is slow to mentally mature and owners should expect to deal with puppy type behaviours, even if their dog has reached full size!

Bernese Mountain dogs are generally calm around strangers. Some may be aloof at first but should settle down quickly. They are watchdogs and will alert their owners to strangers approaching their territory. Aggression isn’t a normal response.

This breed makes a perfect family dog! They’re gentle with children of all ages, although their size can pose a risk to younger children. Playful, friendly, and loving, Berner’s are excellent companions for children.

Some Berners have a stronger prey drive than others are typically peaceful with other dogs. They can live with both dogs and cats if raised together. Well-socialized Berners will be tolerant, sociable and patient.

Check out the pros and cons of the Bernese Mountain dog traits:

The Bernese Mountain dog is a large breed and the only of the Sennehund types to have a long coat. Their coat is only found in black tri-colour. It’s a distinct feature that makes them instantly recognisable to dog enthusiasts!

Hailing from the Swiss Alps, the Bernese Mountain Dog originates from the Canton of Bern. Here they were developed as all-purpose farm dogs. Some locals would refer to the breed as Dürrabachhund after the town Dürrabach, an area these canines were commonly found in.

Their jobs would typically consist of driving cattle from farms to alpine pastures, cart pulling, and watching and protecting livestock. They would often accompany dairymen and alpine herders. The canton of Bern is an agricultural region with over 12,000 farms.

Over 2,000 years ago the breed was brought to Switzerland by the Romans. They were produced by crossing Roman Mastiffs with other guarding breeds. Romans ruled the region from 58 B.C for hundreds of years. The Berner worked as a farm dog from this period onwards.

Sennehund breeds, like the Bernese Mountain dog, are still popular in Switzerland and are listed under the Working Group by the AKC. However, they almost became extinct in the 1800s. Thankfully, Professor Albert Heim helped found a Swiss breed club for the Berner. The breed was redeveloped and their popularity increased.

They were first imported into America in 1926 by a farmer from Kansas where they quickly became popular. By 1937, the AKC officially recognised the Berner. A little while later in 1968, the first American breed club was created. The Bernese Mountain Dog Club of Great Britain was formed in 1971.

Ideally, a Berner will need up to one hour of exercise each day. A lack of activity will lead to boredom. Bernese Mountain dogs make excellent hiking partners and enjoy long walks. This breed is prone to weight gain which can lead to obesity so exercise is highly important.

Mental stimulation is also required. These dogs are bred to work and enjoy completing tasks. Hand out some chores, play hide and seek, teach them new tricks, play puzzle games or even just some interactive play. All of this will help keep your dog mentally happy.

Dog sports is an excellent way to mentally stimulate a dog. It’s also a good form of exercise. Berners excel in agility, herding, rally, obedience, tracking, and drafting. Be careful not to overexert Bernese Mountain dog puppies as this could damage their growing limbs.

A BMD has a long, double coat that sheds copious amounts. Comb through the coat each day to keep it free from tangles. Trimming or clipping isn’t necessary. Baths should be given every 2-4 months or whenever they start to smell.

Their floppy ears need a weekly clean to prevent infections. Even moisture from a bath is enough to cause an issue. Nails grow quickly so should be trimmed every 10-14 days. Dental hygiene is also important and teeth should be brushed several times a week.

Check out the Bernese Mountain dog health issues below:

The BMD has a sensitive side that doesn’t take well to harsh corrections. Positive reinforcement is a great motivator for the Bernese Mountain dog. Avoid too many food treats as this may affect their weight. Training isn’t too difficult as this intelligent canine is eager to please!

Obedience training and early socialization are important for large dogs. An untrained dog as big as the BMD can cause havoc! Thanks to their intelligence, Berners pick up on commands quickly but can also pick up bad habits at the same pace! Be consistent, kind, and patient.

Prone to separation anxiety, this breed can’t be left alone for long periods. Only four hours maximum otherwise, destructive behaviours may arrive. They need lots of affection and are suited to homes where at least one person is in during the day.

A Bernese Mountain dog puppy is impressionable but these early years last longer than other breeds. Constant training throughout their puppyhood moulds them into the well-rounded, friendly giant we all know and love. As a sensitive breed, owners will need to build on their confidence levels.