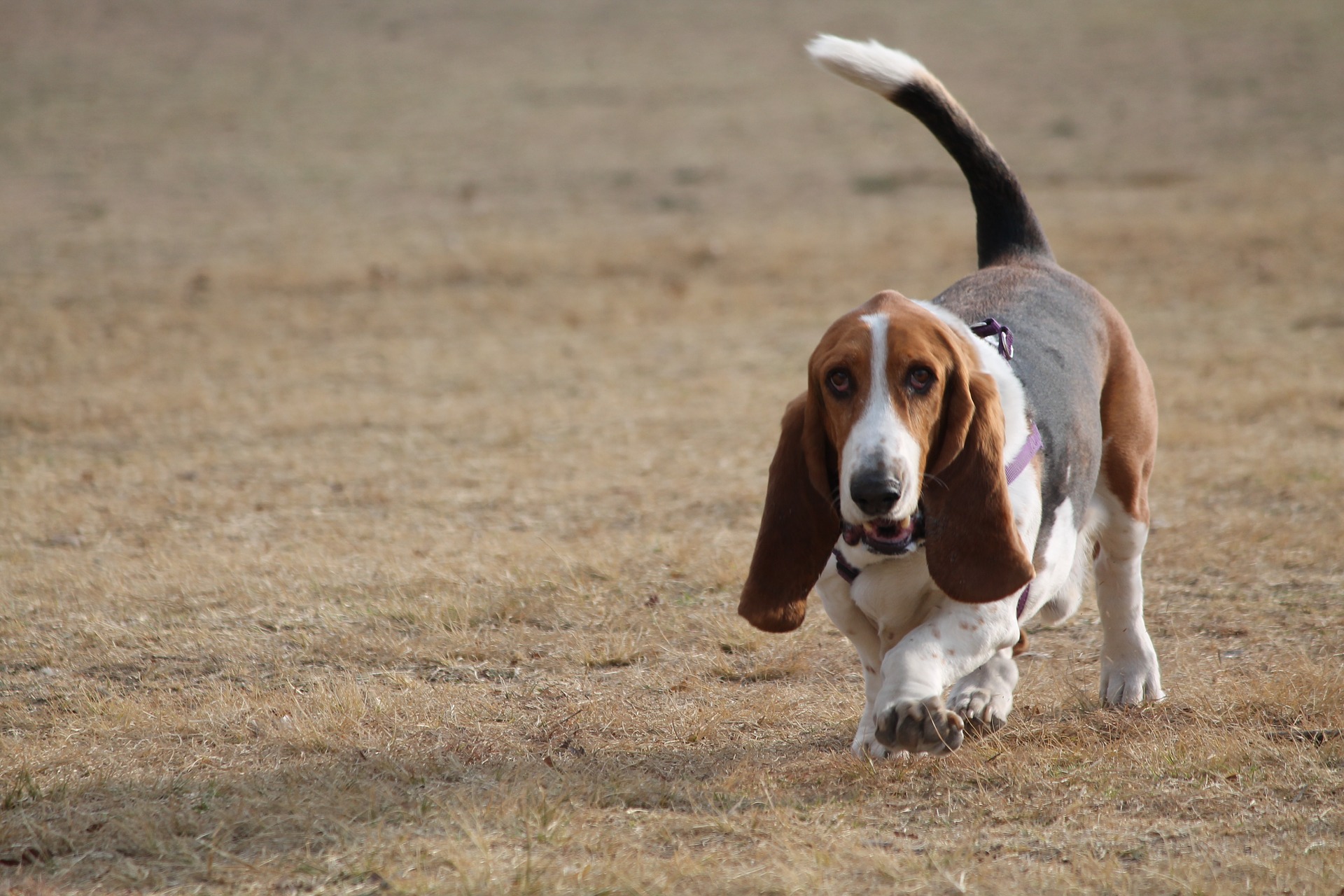 The Basset Hound is one of Britain’s most recognised breeds! Originally bred to hunt hare, these canines are still controversially used in hunting packs on Britain’s estates today. Learn all about this unique breed in our guide below!

Basset Hound Exercise: Up to an hour each day

Basset Hounds were bred as pack dogs which is why they’re highly sociable and friendly. The breed is a hard worker and devoted to its owners. They hate being left alone and can develop separation anxiety. Some Basset Hounds can’t even handle 20-45 minutes alone!

These canines don’t make very good guard or watchdogs. They’re peaceful, gentle and calm. Basset Hounds may bark at first when hearing the doorbell go, but they will be friendly towards strangers.

Basset Hounds make excellent family pets and are particularly tolerant of children. The happy go lucky Basset Hound temperament is great for kids! Due to their short legs and long bodies, children must be careful of the dog’s back. Sitting on them could lead to serious injuries.

This breed gets along well with other dogs. As pack dogs, they prefer to live with other canines. They won’t feel so lonely if they have a furry friend to keep them company. Basset Hounds are friendly with cats and other animals.

It’s not all good! Occasionally, this even-tempered breed will display its stubborn side. This is why Basset Hounds are recommended for experienced owners. These scenthounds are easily distracted and will go wherever their noses take them!

Basset Hound dogs have a distinctive bark that is normally used in the field. They also like to howl and will use it to communicate with their pack on a hunt. When left to their own devices Basset Hounds may also be rather vocal. It’ll be worth teaching them the Quiet command!

Below are the positive and negatives of the Basset Hound dog breed.

Basset Hounds are a medium-sized breed although some do tip over into the large breed scale. They are short-legged with very long ears that direct smells to their face! Their short, naturally oily coat can be found in tri-colour, black & white, lemon & white, red & white, black & brown, and white & chocolate.

It’s believed Basset Hounds were bred during the Middle Ages by French Monks. Friars of the Abbey of St Hubert, Belgium, crossed strains of French hounds from the 6th century creating the Basset breeds. The word ‘Bas’ means ‘low’.

Basset hounds are thought to have originated via a mutation from Norman Staghounds. These were then re bred with the Norman Staghounds ancestor the St Hubert Hound. The need for these Hounds grew greater after the French Revolution when hunting on foot became more popular.

Emporer Napoleon III had bronze sculptures of the Basset Hound displayed at the Paris Salon. It was during his reign popularity for the Basset type Hounds boomed! They were soon imported into England around 1870.

English painter Sir John Everett Millais bought a Basset Hound from Paris named Model. He attended a dog show in Wolverhampton in 1875 who was the first Basset Hound to do so! Millais was determined to improve the dog’s gene pool. So he crossed one of his Hounds with a female Bloodhound.

It was done through artificial insemination so a c-section was required. A rare procedure during this time period. The litter was then crossed with pure-bred Basset Hounds creating the modern-day canine. The Kennel Club recognised the breed in 1880 not long after its creation.

Basset Hounds will need up to one hour of exercise a day. These scenthounds must be kept on leads unless in an enclosed space. They’ll easily wander off on an exploration! As the breed is prone to weight gain, it’s important to keep up with their daily activity needs.

The Basset Hound intelligence level is fairly high, so they can become bored quickly. Mental stimulation should be factored into their daily routine. Try some hide and seek games that require them to use their incredible sense of smell!

Basset Hound puppies will want more outdoors time than adults. Take multiple short walks each day. Despite their short legs, the breed has stamina. So be careful not to overexert their growing limbs.

Basset Hound ears are long and don’t get much airflow. Bacteria and debris will build in the ear canal so they’ll need to be cleaned weekly. Basset Hounds are prone to ear infections. The symptoms include warm, inflamed and a red ear canal, bad odour, and discharge.

These canines have a short-haired, water-resistant coat that should be brushed once a week. Basset Hounds shed all year round but most heavily during the spring and summer months.

Due to their naturally oily coat, this breed can be washed every 2-6 weeks. Remember, their skin folds will need a quick wipe every other day. It’s one of the main causes of their doggy odour. Nails should be filed or trimmed fortnightly.

Below are the following health conditions that have been found in the Basset Hound breed.

When it comes to training a Basset Hound, it’s safe to say they won’t be a walk in the park! This stubborn, independent breed is a scenthound that’s used to going off to hunt on its own. So it shouldn’t be a surprise that sometimes commands will fall on deaf ears!

Be persistent, relaxed, and patient. Whilst it may be a challenge, it is possible to train these intelligent canines. Leash training will need lots of time. Basset Hounds like to pull and draw their own path, so they’ll need to learn to follow their owner’s leadership.

Housebreaking a Basset Hound puppy is another tricky stage. Some owners have found it took them up to six months until they had a fully housebroken Basset Hound! This dog should have regular access to a garden.

These canines can at times be troublesome! They’re known as thieves, stealing food from anywhere they can! Some particularly crafty Basset Hounds have even broken into fridges! Always discipline these bad behaviours as soon as they occur. Never let them get away with being naughty as the behaviour could quickly spiral out of control.