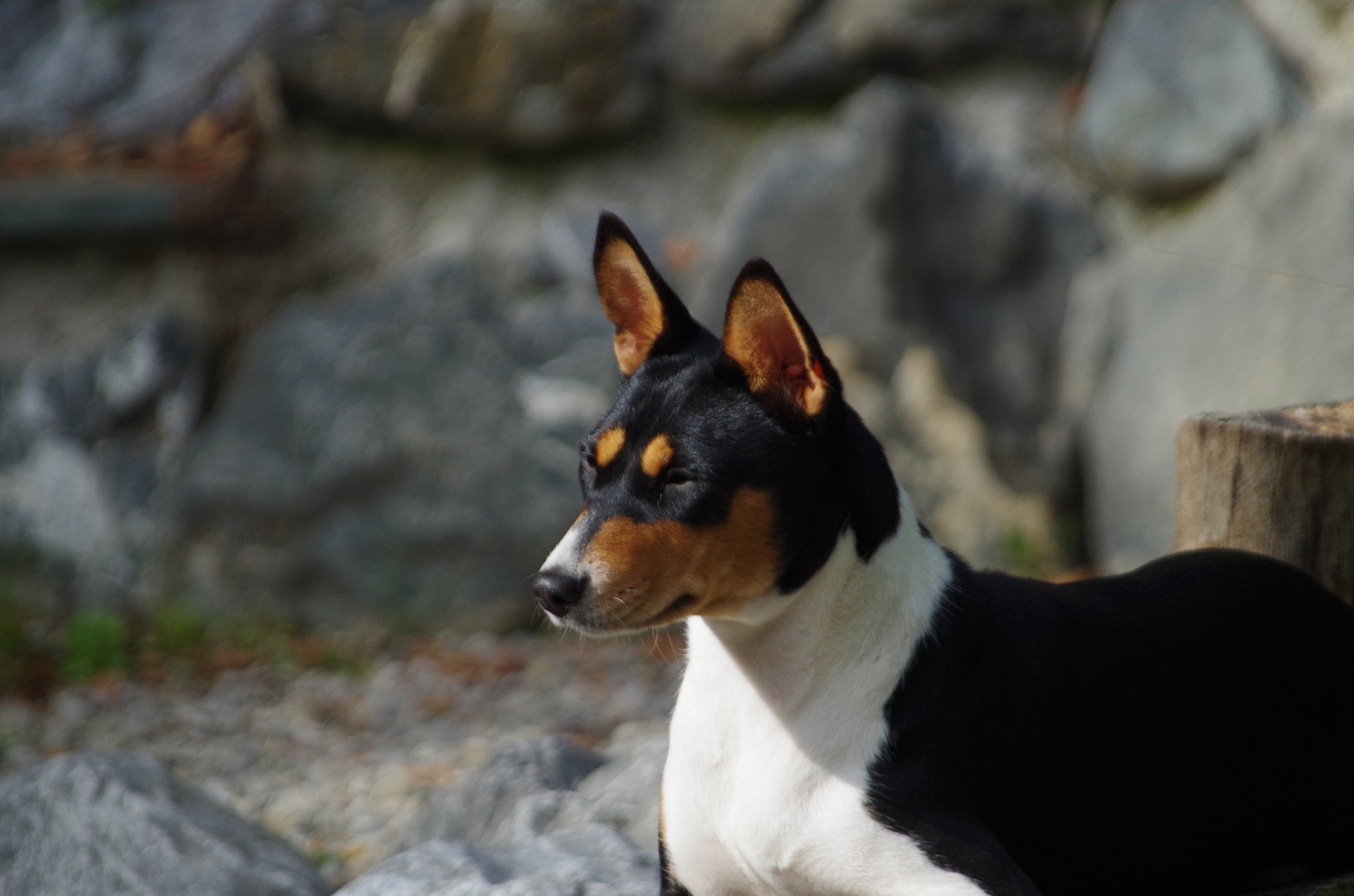 One of the world’s oldest dog breeds with historical links to Ancient Egpyt, Babylon and Mesopotamia. Find out everything you need to know about this mysterious and intriguing canine!

Learn about the pros and cons of the Basenji dog breed below:

The Basenji dog is a small-medium sized hunting breed. Their short coat colours as stated by the Kennel Club are found in Black & White, Black, Tan & White, Red & White, and Brindle & White. The white areas are typically seen on the feet, tail tip, and chest.

The Basenji temperament is curious, quiet, affectionate, energetic, and alert. Unlike other dog breeds the Basenji doesn’t bark but instead, produces its own unique sound due to its narrow larynx. Often described as cat-like, this breed will clean themselves and won’t omit typical body odour.

Due to their high-spirited nature and stubborn personality, Basenjis are better suited to experienced owners. They’re independent and are one of the few breeds that can be left alone for up to 12 hours! Of course, this is dependent on their training and activity needs being met.

This vigilant watchdog will alert their owners to strangers. They may be aloof and stand-offish therefore ongoing socialization is needed. Basenjis prefer to approach humans themselves as opposed to being approached. Some have even shown timidness to hands going in for a stroke!

Basenji dogs are excellent family pets and get along great with older children! Toddlers can be a little too invasive for this breed. They’re also rather mouthy growing up and have a higher tendency to nip and chew but their energy levels do make them good playmates!

Given the right socialization, this breed will be friendly towards other canines. On occasion, Basenjis can be a little hard to get along with and are likely to be dominant towards the same sex. They can live with other dogs and possibly cats provided they are raised together from puppyhood. Due to its strong prey drive, cats and smaller animals are generally viewed as prey.

Recommended: The Berger Picard is fairly unknown. Learn all bout the breed here!

The Basenji dates back to 6,000 B.C and originates from Central Africa. In Ancient Egypt, similar dogs have been depicted in artefacts and on the walls of Pharaoh’s tombs. They’ve also been featured in Ancient Babylonian and Mesopotamian art.

During their early years, these semi-wild dogs would live by the tributary of the River Nile and Congo. They’d hunt prey amongst the African grasslands powered by their high speed and incredible sense of smell. To get a better view Basenjis will jump up over the grass. It’s how they earned their nickname the ‘jumping up and down dog’, or ‘M’bwa M’kube M’bwawamwitu’ in Afrikaans.

For thousands of years, Basenjis lived with little human intervention. The dog that arrived on British shores in 1895, is the same the Pharaohs would’ve laid eyes on. That same year the breed was shown at Crufts under the name African Bush Dogs.

Many of these early arrivals died from diseases. Lady Helen Nutting brought 6 Basenjis back to England from Sudan in 1923 but all died from distemper shots issued during quarantine. Finally, by the 1930s a successful foundation stock was established.

The Basenji Club of Great Britain is the oldest established club for the breed. It was formed on the 9th of February 1939. Due to the disruptions of World War II, an application for registration with the Kennel Club was filed in 1946. Today, Basenjis aren’t very popular in the UK.

Basenjis require up to one hour of exercise each day. These dogs have a high wanderlust potential and should always be kept on leads unless in an enclosed space. All spaces and gardens should be completely secure because Basenji dogs are excellent escape artists.

Due to its high prey drive, Basenjis may take off on a chase! They’ll benefit from two 30 minute walks as opposed to just one but will happily enjoy extra outdoors time! The breed can live in a flat provided their activity needs are being met but their curious nature prefers a garden.

This intelligent canine is great at dog sports! They particularly excel in obedience, tracking, agility, and lure coursing. It’s also a great form of mental stimulation, perfect for the Basenji who is bored easily! Boredom will of course lead to destructive behaviours.

Thanks to their cat-like qualities, Basenjis are rather clean and don’t require much grooming. Give the short, hypoallergenic coat a weekly brush to remove any dead fur. A soft bristle brush or rubber grooming mitt is best for their coat and will help redistribute their natural oils.

Regular bathing won’t be necessary as Basenjis don’t omit typically doggy odour. Only bathe when the dirt is noticeable. Some dogs only have a bath once or twice a year! Skin problems will arise from frequent bathing. Give the ears a clean weekly and a nail trim fortnightly. Teeth should be brushed daily.

Check out the Basenji health conditions below:

Training needs to start as early as possible and owners will need to exercise understanding and patience. Strong-willed and stubborn, the Basenji can be difficult to train. For this reason, they’re better suited to experienced owners.

Sessions should be around ten minutes long. This intelligent pooch learns quickly. It’s all about finding the right time! Crates are recommended for toilet training. As typically clean dogs with feline qualities, the breed isn’t prone to soiling its personal space!

Reward-based training is the best method for this sensitive breed. They won’t take well to harsh ownership. Always praise good behaviour and when using food, keep portions minute! Basenjis need an encouraging atmosphere as they may display nervousness which may hinder training.

Clicker training is a good method for Basenjis. The idea is to mark good behaviours with a click and a treat. Eventually, the click will become the reward. It may be tricky but once they get the hang of it, the benefits are rewarding!

Socialization is deeply important for a Basenji puppy as timid behaviours will lead to behavioural issues. they’ll need ongoing socialization with dogs and strangers to promote friendly behaviour. A lack of this could result in aggression.

Recommended: Have a look at one of Britain’s most famous breeds, the Westie!